The Revolutionary Association of the Women of Afghanistan

On International Women's Day, the Revolutionary Association of the Women of Afghanistan held a large public meeting and celebration in Kabul. March 9th was also the 30th year of its inception and the 20th martyrdom anniversary of the founder of the organisation. They released a statement condemning the corrupt Karzai government and the situation of Afghan women. 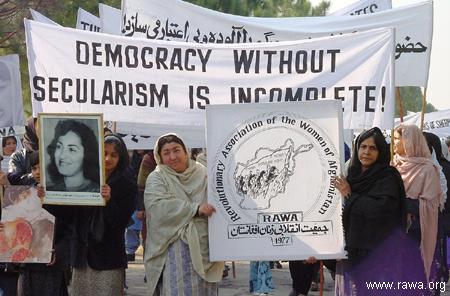 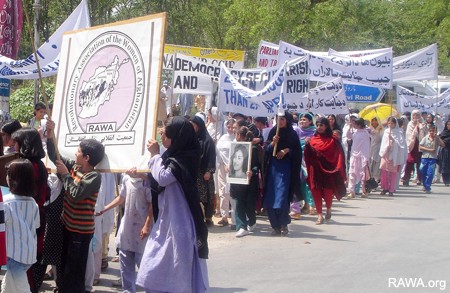 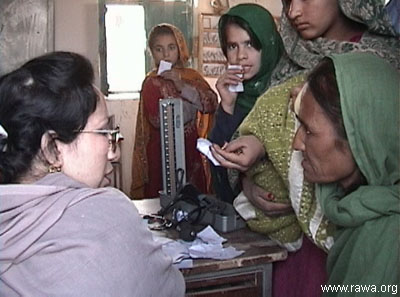 Over 2000 Afghan men and women participated, including delegations from Italy and Catalonia. The event had music, poetry, and a satirical play mocking the criminal-fundamentalists in power.

In a statement released on IWD they say: "The world came into motion in the name of "liberating Afghan woman" and our country was invaded, but the sorrows and deprivations of Afghan women has not just failed to reduce, but actually increased the level of oppression and brutality day by day on this most ruined population of our society.

"The corrupt and mafia government of Mr. Karzai and its international guardians, are playing shamelessly with the intolerable suffering of Afghan women and misuse it as their propaganda tool for deceiving the people of the world. But the presence of a number of women in high posts is not important unless they touch the depth of our people's adversities and sufferings".

It often has to act in secret, since there are many fundamentalists and criminals in Afghanistan who strongly oppose their activities, and have a misogynist agenda. They organise more openly in Pakistan, and regularly have demonstrations there, but the situation is still tense. In 2000 a peaceful RAWA demonstration in Islamabad was attacked by Taliban.

They have set up many schools in Afghanistan that focus on educating women, who have an 87% illiteracy rate, but they also educate boys and girls. There is an emphasis on assisting women in learning skills that can make them financially independent, such as handicrafts and farming.

RAWA runs clinics and mobile health teams both inside Afghanistan and in Pakistan's refugee camps. This includes providing food, blankets and medical care for refugees during the harsh winter months.

They run several orphanages for boys and girls in Pakistan and Afghanistan. They do not offer children for adoption by westerners, but enable sponsorship.

RAWA documents the political and humanitarian problems in Afghanistan, spreading news from independent sources throughout the country, and providing videos and articles to the international media.

Men are not allowed to be members of their organisation, however there are many Afghan male supporters who do help with spreading RAWA literature, escorting foreign visitors, and with security at RAWA events.