This was a strange one. Great for pictures but still a bit odd. I am surprised and impressed by the turnout. There must be at least 400 people here. All of them masked up, mostly in those V for Vendetta masks that are presently quite fashionable. They are making plenty of noise and giving out free cake to passersby. The cake I am told is a sarcastic gesture to celebrate the birthday of Ron L Hubbard the founder of the Church of Scientology (COS). I guess it is the closest thing that the average Scientologist has to Christmas day? 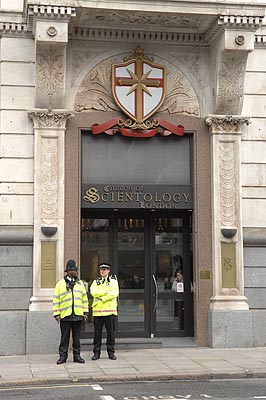 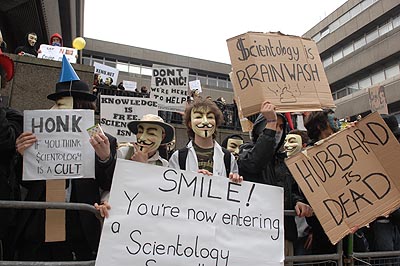 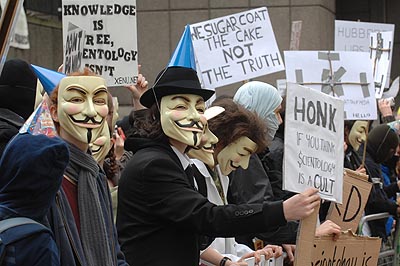 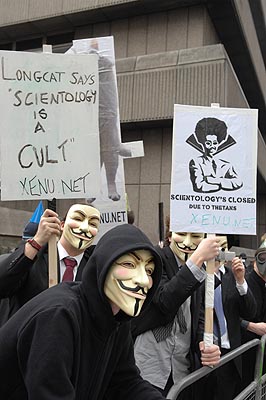 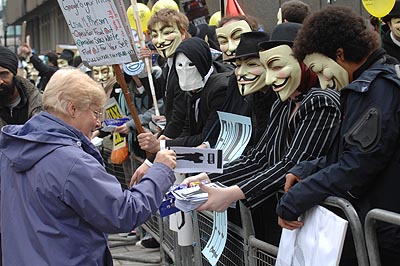 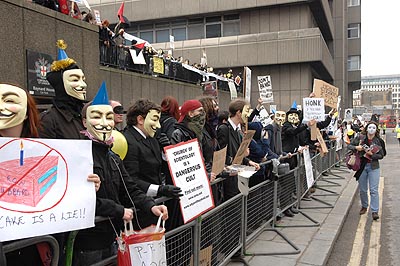 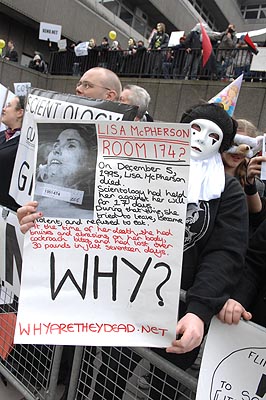 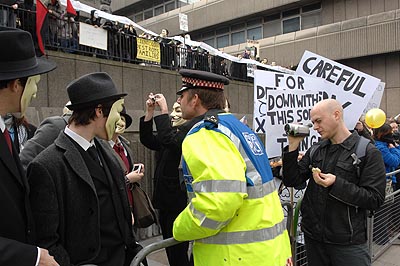 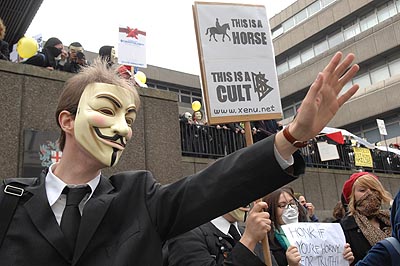 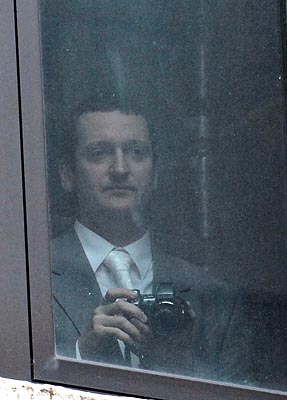 The thing I’m not quite sure about is why such interest in such a tiny sect? Don’t get me wrong every religion is open to abuse and this one is no exception but its not like they have much of a presence over here. They clearly have shit loads of money. The building we are outside which houses their headquarters must be worth ten of millions. But I’ve never been aware that they have much in the way of members? It also occurs to me that if the COS was given enough rope it would surely hang itself? Like everyone else, when I saw THAT Tom Cruise video on Youtube I didn’t stop laughing for a week. When I saw an over emotional John Sweeney trying to expose them on Panorama and making a huge tit of himself in the process I was equally entertained.

I’m guessing that most of the people present on the demo are in their late teens or early twenties (its difficult to tell with the masks). And I'm wondering if this is the latest internet phenomenon to put bored individuals with too much time on their hands onto the streets. A bit like flash mobs with a cultish twist? The three individuals I speak to don’t really seem that political. They are full of facts and figures about the less savory aspects of scientology and certainly know their subject. But two of them are completely unaware that there is a national demo against the war today. Ok its unfair to judge a 400 strong demo on a brief chat with just three of them but I’m left wondering if this is a serious campaign to trash the tiny foothold the COS have in Britain or just a passing fad?

Meanwhile across the road the Scientologists inside the building do little to counter their sinister image by filming and snapping the demonstrators. They then make themselves look even more dubious by ducking out the way when they see the press pointing cameras at their actions. Nothing to hide???

P.S. For the record: As an atheist I view all religion with equal indifference or equal contempt if it crosses my path. I have also always thought that Tom Cruise was a prick. Long before he became a bad advert for his religion/cult/sect/community (delete as applicable).

The scientology protest was part of a worldwide day of action against the cult. It has taken place in many cities accross the UK and all over the globe, covering over 250 locations. It is unfortunate that the anti war protest got organised for the same day.

The protests stand a good chance of making a tangible difference and need all the support they can get.

There is loads of information out there about these protests. A communique from after the scientology protests of the 10th of Feb is below with some links.

As the UK media are failing miserably to cover the worldwide protests against Scientology organisations, it is up to everyone else to pass the information on, so please forward this around.


On the 10th of February 2008, a large body of normal people gathered outside Scientology buildings across the globe to participate in a major joint protest against the frequent crimes and injustices perpetrated by Scientology. The protest started on the internet and has now spilled onto the streets on a truly global scale. The group is called Anonymous, and they are after Scientology.

We are Anonymous, we are educating the world with the truth about Scientology. Knowledge is free. Arm yourself!


"Scientology is both immoral and socially obnoxious... It is corrupt, sinister and dangerous. It is corrupt because it is based on lies and deceit" — Justice Latey, ruling in the High Court of London


This is a BBC documentary by Panorama about Scientology:

This gives a reasonable summery of the fight by Anonymous against Scientology so far: