About 40 Burmese and their supporters, held a demonstration outside the Burmese Embassy on March 13th in memory of Ko Phone Maw and all those who sacrificed their lives in the struggle for Burma's freedom. Ko Phone Maw was the first student murdered by the Burmese junta on March 13th 1988 at a peaceful demonstration at Rangoon Institute of Technology (RIT). It was the start of the 1988 democracy protests in which thousands of demonstrators were later murdered. 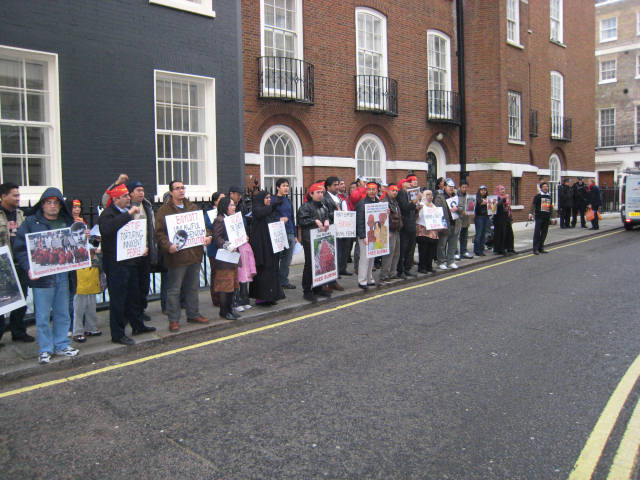 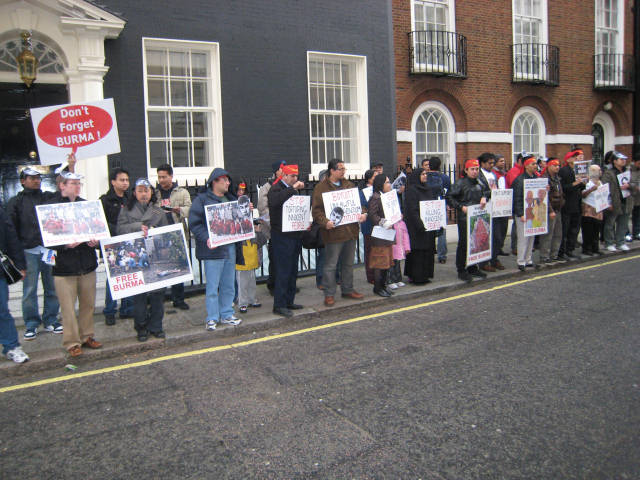 For part of the protest the Burmese wore a mask of the image of Ko Phone Maw. The previous day, demonstrators at the Embassy had observed a Burmese intelligence officer trying to photograph the Burmese protesters from windows at the Embassy.

After 14 years of farcical "discussions" on a proposed constitution, the military junta has announced that there will be a referendum on it in May. However Burmese have so far been unable to even read or get full information on the constitution they are supposed to be voting on. The details released so far, makes it clear that the farce will continue eg.

* Anyone who distributes leaflets or makes speeches against Myanmar's constitutional referendum can be imprisoned for three years. [1]

* Monks, nuns, high-ranking Christian and Hindu leaders are not eligible to participate in the referendum.[1]

* The President must have served 15 years in the military. [2]

* 25% of the seats in the new parliament are reserved for armed forces personnel. [3]

* In a blatant reference to Aung San Suu Kyi, the President can not have a foreign spouse.[3] Her party won 82% of the vote in the 1990 elections, but the junta would not transfer power. She has been in detention for 12 years and won the Nobel Peace Prize in 1991. Her British spouse died in 1999.

* Although the junta pretends to want multi-party elections, it excludes so many people and groups from the election that the UN special rapporteur on Myanmar Paulo Sergio Pinheiro recently remarked "If you believe in gnomes, in trolls and in elves, you can believe in this process of democracy in Myanmar”.[4]

* Burmese villagers are being tricked into signing statements supporting the constitution. Officials collect names, identity card numbers, and parents’ names and addresses whilst obscuring the contents of statements they make the villagers sign. [5]