The Evening Standard is having to publish a front page article this evening over the sensationalist lies it told about the Climate Camp. 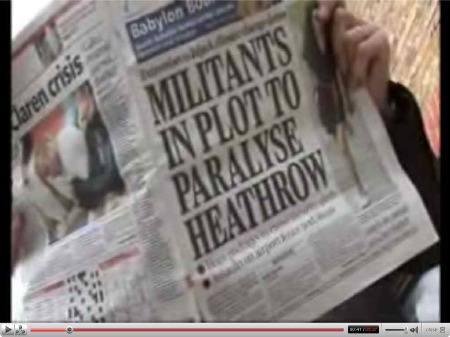 Evening Standard condemned by press watchdog for coverage of the Camp for Climate Action's Heathrow protest. Claim of fabrication upheld.

In a much awaited ruling [embargoed until 11 am] the Press Complaints Commission (PCC) issued a stinging rebuke against the Evening Standard today. The usually mild- mannered PCC slammed the Standard's coverage of last summer's Camp for Climate Action at Heathrow as 'materially misleading' and 'alarmist'. The Evening Standard will be forced to carry the ruling on their front page today.

On 13 August last year, the Standard ran a front page story headlined 'Militants will hit Heathrow' the day before a climate change protest camp near Heathrow airport opened. Chief reporter Robert Mendick said he had uncovered a plot to paralyse the airport via invading runways and placing suspect packages. The story was subsequently echoed in several media outlets, all of which ran the false claims believing them to be true. The Camp for Climate Action immediately wrote to the PCC declaring that the article was "fabricated". The PCC adjudicated the complaint as "upheld".

The PCC gave the strongest possible reprimand in its powers, finding that the article was a 'serious breach' of the PCC code of journalistic standards. They found that "adequate care had not been taken" by the Standard, despite the Standard's claim that their reporting was the result of an 'extensive operation organised by an extremely experienced team of executives and senior reporters'[Doug Wills, Letter to PCC, February 12, 2007].

The rare PCC ruling comes after seven months' worth of submissions, in which the story's authorship, sources and credibility are all called into question. Alexandra Harvey, one of the team responsible for pulling apart the Standard's story, said today:

"This was a political hit job of the worst kind. There was no plot, and the Standard's ever changing claims throughout this process show that this was a fiction created for political ends - to stop the growth of a mass movement taking action on climate change".

Chief reporter Robert Mendick has previously denied writing the very article he authored and the PCC condemned. The Standard subsequently claimed the story was the work of a different junior journalist, Rashid Razaq, working undercover.

Mr Razaq has a history of being accused of fabrications which the Standard has ignored. Last year Mr Razaq wrote a story falsely alleging the showing of films sympathetic to terrorists at the Freud Museum. The alleged interviewee said the interview Mr Razaq reported in the article never took place. A complaint by the museum's director and curator was never answered. An undercover story by Mr Razaq about his work at Barnet Hospital as a cleaner was called into question when the Hospital stated that he was in fact employed as a porter, and had misreported significant facts. "This is a disturbing pattern, and the Standard ought to examine why Mr Razaq was allowed to continue writing these stories for so long," said Ms Harvey.

Natasha Edlemann said, "This summer will see increased direct action aimed at stopping climate change. This growing movement expects and deserves scrutiny from the media, but we need to draw a line under dangerous propaganda by those who claim to care about climate change while seeking to destroy the reputations of the people who are actually doing something about it."

This year's Camp for Climate Action will take place 4 to 11 August at Kingsnorth power station in Kent. Everyone is invited to join in.