in the Moscow city centre at the exit of Kitai-Gorod metro station a group of about 15 neonazis armed with knives attacked 5 people who were going to a hardcore / punk gig.
Alexei Krylov died as a result of stab wounds

http://nichegohoroshego.narod.ru/ at Art Garbage club. Alexei Krylov aged 21 from the Moscow Region town of Noginsk, died due to multiple stab wounds some 15 minutes later, before the ambulance arrived. A girl attacked in the same incident survived by a chance - the knife got stuck in her backpack less than an inch from her body. There were several nazi mobs in the area each numbering 10-15 people attacking antifascists. The gig was canceled a few bands into the evening after some pepper spray was used and windows broken by persons unknown. The attack appears to have been planned in advance with involvement of some FC Spartak hooligans.
Alexei’s survived by his mother and two younger sisters. The family is poor and they need material help for the funeral. (Russian residents can send money via

Nearly two years ago in Moscow 19 years old Alexander Ryukhin has been murdered by a nazi gang on his way to a hardcore gig.
On March 19 between 200 and 300 antifascist activists took part in a march in Alexei’s memory between Kropotkinskaya and Smolenskaya metro stations in downtown Moscow. They carried banners, chanted slogans and burned torches. It went largely peacefully despite being illegal and despite fascists making plans to attack the marchers.
antifa demo on utube 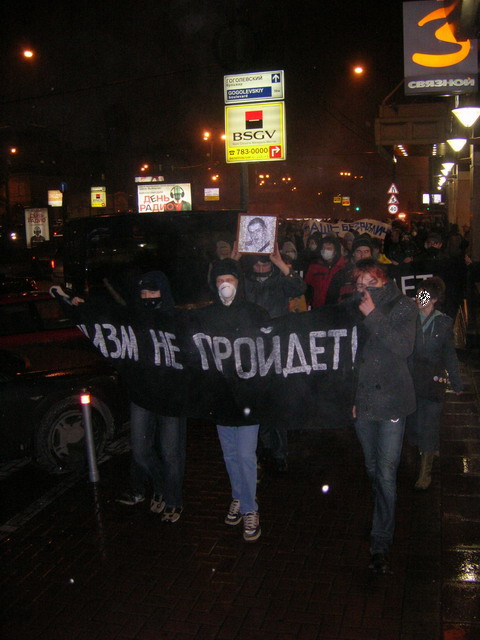