Jack Straw announced plans to replace SOCPA sections 132-138, which ban spontaneous demonstrations around Parliament, and make it a criminal offence to demonstrate with police permission - to get maximum positive PR from the ever compliant press, Straw only announced the repeal now, while the need for new laws was hidden in the small print. One battle may soon be over, the struggle continues on the streets.

We are meeting at 1pm at the roundabout on the South side of Trafalgar Square on Saturday 5th April. Come with your mates and discuss with them what you want to do with the day. Bring placards, banners, whistles or anything else you can think of. Let them know you won’t be easily silenced. 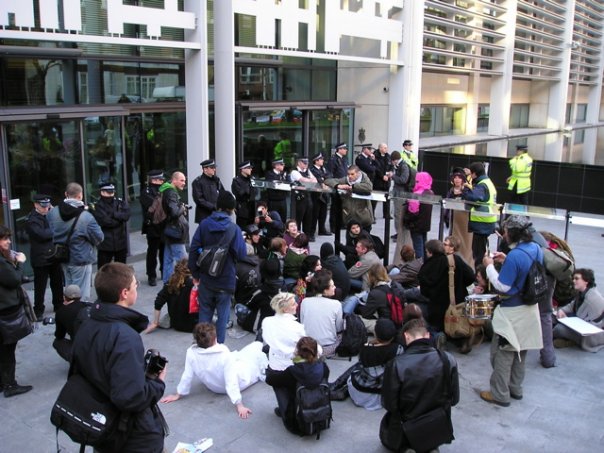 It's time we had freedom to publicly assemble in the UK. The Campaign for Free Assembly is calling for a for action against the existing legislation restricting our freedom to protest and proposed new restrictions around Parliament.

We need to respond to continued police repression and the Government's white paper on 'The Governance of Britain'. They propose the repeal of the Serious Organised Crime and Police Act (SOCPA) 2005, sections 132-138, which restrict demonstrations in a 1km zone around Parliament, but at the same time ask MPs to come up with new ways to thwart demonstrations.

The proposed powers and those already given to the police create a climate of criminalisation: a vast confusion of laws are applied arbitrarily so people are arrested simply for standing in the wrong place at the wrong time or having the wrong face.

This combines with a police culture that evades accountability even when people are killed, as shown by the Menezes case and others. There should be no complacency that the court system can be relied on to prevent injustice. The ability to exercise effective protest is crucial in order to defend ourselves and others from the abuses of those in power.

Whatever the issues that matter most to you, whether you are concerned about a safer school crossing, a new runway or ending a war, these law affect you.

What about Critical Mass?

Following its consultation, the Government is looking to repeal SOCPA sections 132-138. Section 137 restricts the playing of loudspeakers within the zone, a bone of contention for some Critical Massers as as it means that the police are insisting that cycle sound systems must be turned off in the vicinity of Parliament. Curiously, this police ban seems not to be applied to car sound systems.

"The Government therefore invites the views of Parliament on whether additional provision is needed for the purpose of keeping passages leading to the House free and open while the House is sitting, or to ensure that, for example, excessive noise is not used to disrupt the workings of Parliament."