With just a few days left before Sea Shepherd’s planned departure from Bermuda to intervene against the world’s largest mass slaughter of harp seals, the Canadian Government issued a warning to the Sea Shepherd Conservation Society to stay out of Canadian waters. 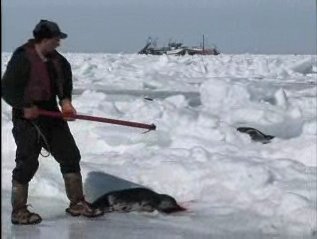 I have reasonable grounds to believe that your vessel is in contravention of international maritime conventions. The vessel must comply with International Maritime Organization (IMO) conventions, which include:

Based on information provided by the Netherlands Registry, the vessel does not meet the requirements of the above conventions. Therefore pursuant to Section 227 of the Canada Shipping Act, 2001, you are hereby directed to not enter Canadian waters. If this order is not complied with you will be subject to prosecution under Canadian law. “

Minister of Transport, Infrastructure and Communities.

To: The Honourable Lawrence Cannon, Minister of Transport, Infrastructure and Communities,

We dispute the “right” of the Canadian government to deny free passage of a Dutch registered yacht into the waters of the Gulf of St. Lawrence and the offshore waters off Labrador and Newfoundland.
The Farley Mowat is not engaged in an economic activity and therefore we will not be in violation of the economic exclusion zone. We have the right of free passage through these said waters.

Mr. Cannon, the Sea Shepherd Conservation Society cannot accept the cruel and inhumane mass slaughter of more than 325,000 harp seal pups. We also reject any claim by the government of Canada that the seal slaughter is “well managed” and that the quotas are set with the guidance of respected scientists. What you call scientists we call biostitutes. Your government buys the science it requires to justify your cruel and ecologically unsound schemes to destroy seals.

The threat of diminishing ice coverage due to global warming has not been factored into the decision to set quotas.

My international crew are prepared for a confrontation with your government over this issue and no threats of prosecution or threats of physical harm will deter us from standing up in defense of innocent seal pups.

As always Sea Shepherd campaigns will exercise extreme caution to insure that no person is injured. Sanctity of life is our priority consideration.

The seal hunt is a perverse abomination that has no place in the civilized world and certainly no place in Canada in the 21st Century.
Do your worst Mr. Minister, if we are ready to risk our lives on the high seas to defend marine wildlife, the fear of imprisonment is hardly a deterrent. In fact being imprisoned for defending innocent lives is a mark of honour and distinction. Protecting the innocent from the remorseless and the merciless is what this organization was established to do.

The ship will proceed into the Gulf of St. Lawrence to defend seals from the violence and ecological recklessness of Canadian seal killers.