Manchester's Fossil Fools got up to all sorts of tricks today, visiting some of their idols in the city centre... unfortunately in our efforts to congratulate the best fossil fools a few mishaps occurred... 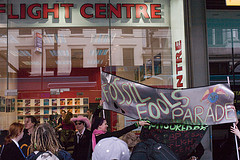 In the Way at the Flight Centres! 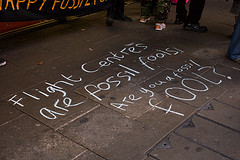 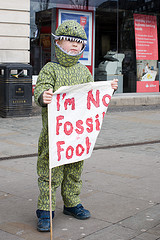 The Oldest of the Fossil Fools 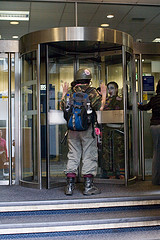 Clowns stuck in the doors at RBS! 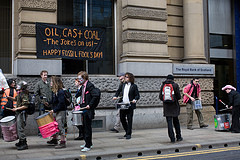 Oi! You've left your banner behind!

Some clowns got stuck in the revolving doors at RBS and a human pipeline was escorted from the city centre building by security. Some members of the parade got confused and chalked messages on the pavements, and people trying to escape the beating of drums ran to hide in the flight centre while the samba band, who really had no idea, blocked the entrance! Some policemen came along looking for Spartacus but couldn't find him anywhere.

This was a wonderful day where fossil fools in all their many guises could come together, from old men (we think?!!), to young dinosaurs, in shades, masks, facepaints and suits to worship at the alter of commercial climate denial. To encourage people to consider whether or not they too may be fossil fools there were free vegan cakes, and leaflets with guidance about making Manchester a cleaner city (another little slip up).

On a positive note banners reading 'OIL,GAS and COAL the jokes on US! Happy Fossil Fools Day! were hung on the walls of RBS, out of respect for their hard work contributing to climate chaos. Placards saying 'Mr.T says "I pity the fuel" were waved. The parade ended triumphantly outside Manchester Town Hall to recognise the vital role Manchester City Council play in the area, damaging the climate every day. Just before the end a charming man did a short but inspiring solo on the spoons.