Today the Edinburgh battalion of the Clandestine Insurgent Rebel Clown Army (CIRCA) marched into Sainsbury’s and Tesco to point out the absurdity of squandering limited fossil fuel resources on flying strawberries to Scotland so we can eat them in the middle of winter. 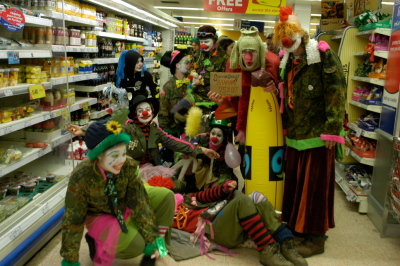 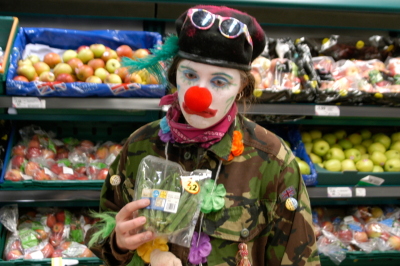 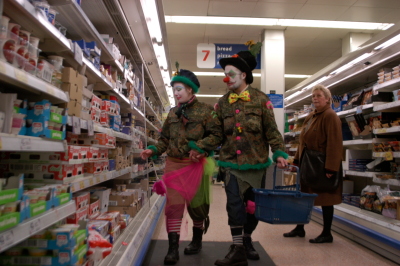 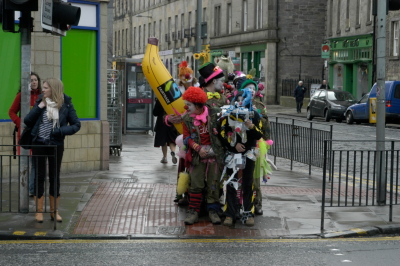 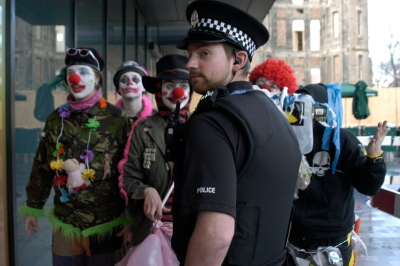 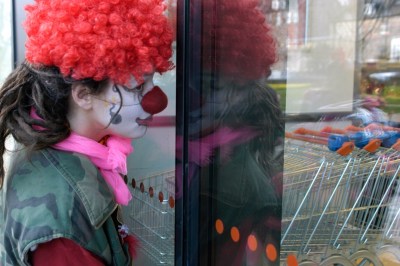 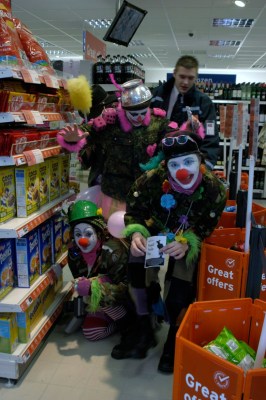 As part of International Fossil Fools Day ten clowns burst into supermarkets between 4 and 6 o’ clock in the afternoon, in time to salute shoppers on their way home from work. The red-nosed army marched into the new Sainsbury’s on Middle Meadow Walk, where they acted out the carbon intensive process of transporting food from farmer to plate. The clowns then scattered throughout the store in search of an elusive ‘Scottish banana’, encouraging fellow shoppers to find (if they could) any produce in the store which was actually from Scotland. The battalion placed flyers in shopping baskets and amongst pineapples, peaches and pears reminding shoppers that 50% of vegetables and 95% of the fruit eaten in the UK now comes from overseas.

Under the watchful eyes of the police, the clowns then navigated their way through the streets of Edinburgh and stumbled into a Tesco on Nicolson Street. Here they discovered the latest invention of green supermarket spin, ‘carbon labelling.’ Shoppers seemed surprised, but amused by the presence of the tricksters who were going about their normal shopping routine. The clowns were eventually forced to leave by security at both Sainsbury´s and Tesco.

At Tesco today, Clown combatant Major Look said, “We are here to draw attention to supermarket food mile freaks such as Tesco and Sainsbury’s who adopt extremely harmful practices in order to sell food from all over the world, all the year round. Instead of promoting local Scottish produce and seasonal fruit and vegetables, big supermarkets air-freight food into the country from far away, contributing tons of CO2 to the atmosphere. Transporting food by plane is one of the fastest growing methods of distribution, and also the most polluting.”

When asked to comment on the tactics of the Clandestine Insurgent Rebel Clown Army, Kernel O’Truth commented,

“It’s better to be foolish than fossil fuelish!”