Welsh Opencast Mine protest in London on Fossil Fuels Day

The demonstration by the Campaign Against Climate Change at the offices of Argent Group PLC in Piccadilly on April 1 was one of many actions as part of the global 'Fossil Fools Day.'
Pictures copyright (C) 2008, Peter Marshall 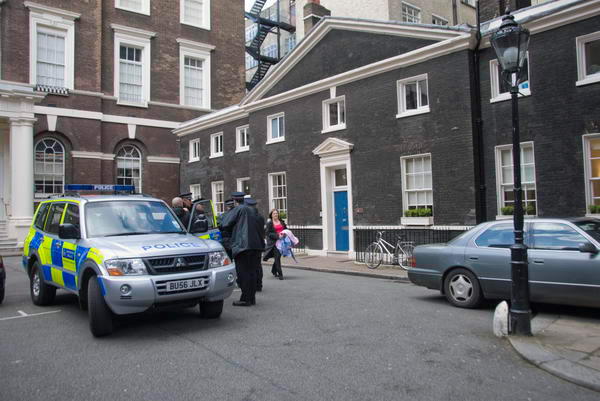 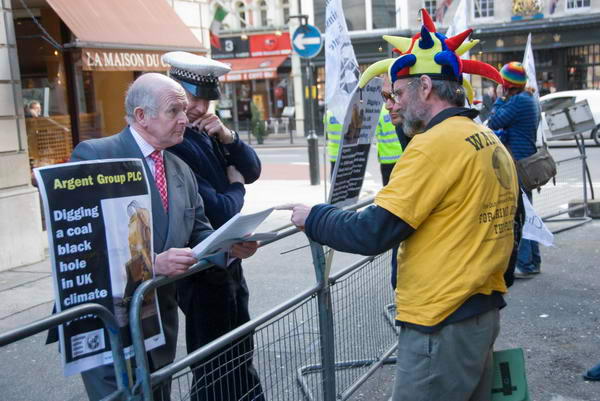 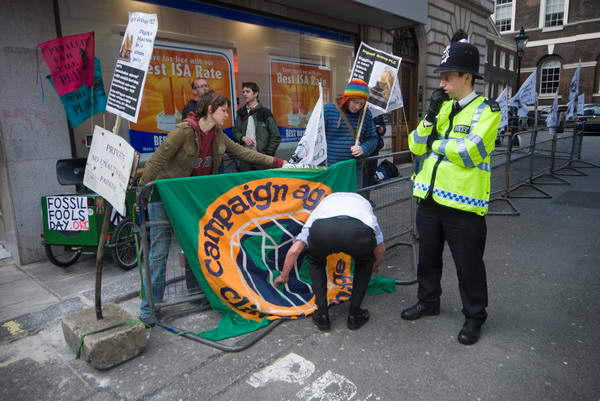 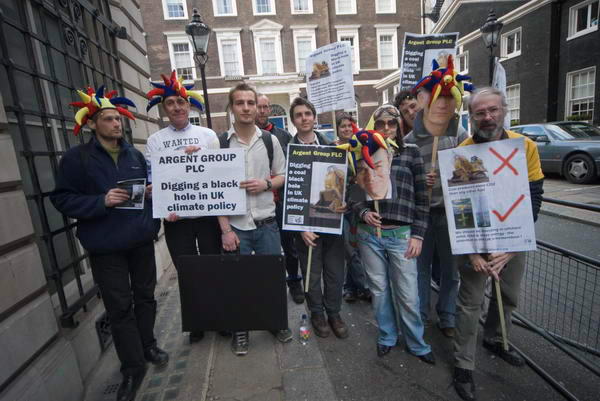 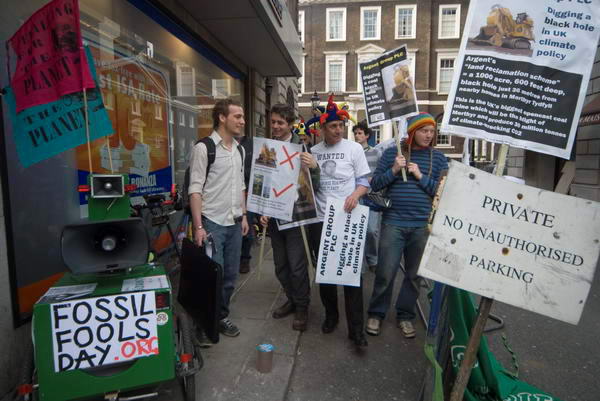 Argent form half of Miller-Argent who run the UK's largest opencast coal mine, Ffos-y-Fran in Merthyr Tydfil, South Wales. Just 36 metres from the nearest houses, extraction will continue for more than 15 years (perhaps as along as 40 years), producing coal that will add at least 30 million tons of CO2 to to our atmosphere.

Scottish safety standards demand a minimum gap of 500 metres from housing, but the implemention of a 350 metres limit by the Welsh office has been delayed - allegedly to allow the Merthyr working to go ahead.

Despite the misery and health hazards through air-borne dust, diesel fumes and noise to the 70,000 or so who live in Merthyr (the authorities set up a Health Impact Study - then refused to accept it when it gave a damning report) and the dangers of possible disaster to those living on the edge of the 'black hole', no offers have been made of compensation or relocation.

Thinking globally, the carbon dioxide will add significantly to the world-wide climate change which already threatens massive disasters, in particular with densely populated low-lying countries such as Bangladesh likely to become largely untenable in the medium term future.

This opencast coal mine has only been allowed to go ahead because of close cooperation between the government and commercial interests backing 'new coal' and new coal-fired power stations such as Kingsnorth. You can read more about it on the web sites

Around a dozen demonstrators turned up at 4pm in in Albany Courtyard, a private street off Piccadilly where Argent have their London office and set up behind barriers watched by rather more police from three vans and a police car, with a police photographer taking extensive video and photographs. A manager from the Albany came and talked to the demonstrators, taking a document about the mine and promising to deliver it to his tenants at Argent Group PLC.

A steady stream of pedestrians walking along Piccadilly took leaflets and quite a few expressed their support for action against climate change (only one stopped to argue against it while I was present,) and passing motorists hooted in support.

A few more pictures on My London Diary, http//mylondondiary.co.uk/2008/04/apr.htm shortly.