Background – Bacton is a major energy hub for the UK, handling around a third of the nation’s gas supply, coming in from the North Sea and European pipelines. The gas is handled by a range of oil and gas companies (Shell and Exxon among others) before being sent into the national grid. 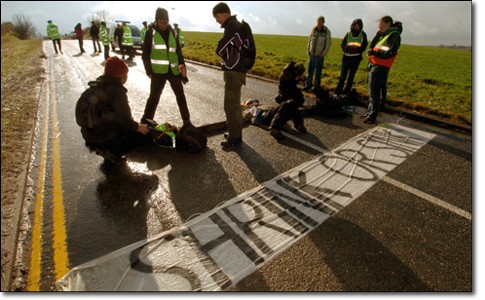 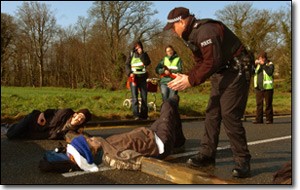 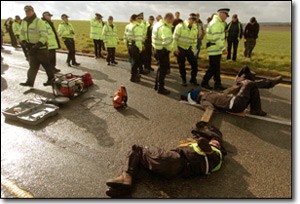 Early on Fossil Fools Day 20 Earth First! activists paid a visit to Bacton Gas terminal. The road was blockaded (using steel and concrete arm tubes) for over 4 hours - disrupting the smooth functioning of the terminal. Banners were stretched across the road, which read - “Keep fossil fuels in the ground” and “Shrink or sink”.

Police, some of them armed Ministry of Defense officers, were on scene, diverting traffic around back roads. The action ended voluntarily just before 11am. Three people who locked on were arrested for obstructing the highway, but then police decided to arrest everyone for the same offence - despite the fact that others were not positioned in the road and had left the scene.

In total nine women and ten men were arrested and taken to three different police stations. All were released, after about 5 hours, to return in early May.

19 were arrested after a four hour blockade, and have now been released, on bail till the beginning of May. Two blockades were set up, one within 30 yards of the MOD police station on site. Two cops were sitting in a car there, watching people set up the blockade, and another police patrol arrived shortly afterwards. The site is protected by 2 high fences with space and razor wire between, plus is covered by SOCPA due to its national strategic importance. Protestors used a cunning combination of steel and concrete lock-ons, with extra secret ingredients, plus speed & skill. Local residents applauded. The policing policies kept changing, with a confusing combination of MOD & Norfolk plod; eventually the Gold Command lost it and decided stupidly to arrest everyone for obstruction of the highway. Apart from some of those locked on, all the other alleged obstructors were arrested some distance away. Unfortunately camera & photos are currently in the custody of Norfolk Constabulary.