Reports over email lists state that 46 persons were arrested and that they were severally beaten in the way to the police stations and they were also under death treat. when Romanian riot police raided a meeting place for anti-NATO activists. On guy from Iasi
(Gheorghe) was hospitalized and he was beaten even in the hospital.
Another girl ask the police to go to the hospital...Small protest was
organized in the front of the police station 11.
Over the last days, massive Repression during the NATO Summit in Romania has been reported.
Now activists call for international solidarity actions. Most reports are collected via the Gipfelsoli website:

http://contra-doxa.com that contains most infos in english
about NATO-summit in bukarest has probs and is temporariliy not online.
find some infos mirrored on

http://gipfelsoli.org/Home/Bukarest_2008,
some of them only in German. More reports via Indymedia Toulouse in French.

One day before the start of the Nato summit in Bucharest the situation gets worse. Hourly alternative looking people are detained by the police for no reason. Afterwards the police construct absurd offence, for example carrying a pocketknife amounting to possession a weapon. Every person coming to or leaving the convergence center is in danger of getting detained (some simply for walking to a nearby shop). The detained are interrogated, photographed and fingerprinted in police stations, and held for up to 24 hours.
At the Romanian border several groups of activists, as well as others, have been denied entry into the country.

The most involved Romanian activists around the country have at this point been visited or called by either the local police or SRI (Romanian information service) to be warned against participating in any anti-nato protests or to have their families intimidated.

27000 police officers, military, snipers and secret police are occupying the city. The security alert code yellow has been announced, meaning that all demonstrations are forbidden in the whole city amongst other restrictive laws.

In the face of this repression the actions of the few activists present are severely limited. Therefore we urgently need your solidarity. Please make solidarity actions in your cities.

27th of March - Tatiana Duplei was run over

29th of March 7am - 5 anti-nato activists in Bucharest were stopped by the sector 3 police and taken to police station 11 for verification. They refused to have photos taken or be
fingerprinted, and were only let go once they started making phone calls to the mass media

31st of March - 7 Czech activists tried to cross the border and were detained at the border
for 8 hours after which they were denied entry into Romania. One of the activists was carrying some information from the Czech anti-radar base movement. They were all searched and some cd's and leaflets were found

1st of April c 00:30 3 activists were stopped by sector 3 jandarmerie when they were coming back from the market. They were stopped for 2 hours outside and then taken to section 14. a penal case has been opened against them for carrying 'white weapons' (Swiss army knife)

1st of april in the morning 4 polish activists tried to cross the border. After their license
plate number was checked they were told by the police that they knew that they were going to Bucharest to protest against nato and were denied entry.

1st of April c. 12:30 1 person was stopped by sector 3 jandarmerie for suspicion of having stolen goods on his person and taken to the section 3 police for verification and checking after 1.5 hours on the street. he was released at around 6 pm. big backpack

1st of april in the late evening several anti-nato activists were stopped and searched by police while on their way to the convergence center, but eventually were let go

At approximately 12:30pm today, hundreds of police descended on the convergence center of the anti-NATO gathering in Bucharest. At this point, some organizers on the scene estimate that 46 arrests in all have been made. All the arrests were made inside the convergence center. There was no demonstration happening. Many of the police were wearing ski masks, and were very hostile to journalists trying to access the scene.

The convergence center was located near the center of Bucharest, which is hosting a NATO summit that just got underway today. It was located in an industrial space which the anti-NATO demonstrators had legally rented. According to the police, there were accusations that some protesters used aggression against one of the guards near the site.

By 3:15pm, 3 large paddy wagons had already left the site, carrying demonstrators inside. Some other protesters and media were gathered on the other side of the street, chanting to release the demonstrators.

A police spokesperson gave a few statements to the media in Romanian. (I don't speak Romanian, but the following info was losely translated for me by a Romanian speaker) According to the spokesperson, the police found anti-NATO banners and some paint inside the convergence center. There was nothing illegal. He stated that the protesters were not terrorists, and that they had been taken to the police station to have their identities verified. Among the group of people arrested were local activists as well as foreigners. The spokesperson also stated that this police intervention is not against the national constitution of Romania, and that liberty of expression is guaranteed.

At this point (5:10pm Bucharest time), all the protesters are still being detained. One organizer has stated that a few were badly beaten.

It should be noted that these arrests were made before any organized actions against the NATO summit had taken place, and also in a context where the authorities have stated they would not tolerate any opposition to NATO during the summit. The local corporate media has also been in a frenzy about "dangerous anarchists" who are going to descend on the city and break store windows. One TV news report on Realitatea TV yesterday morning encouraged viewers to throw rocks at any demonstrators that they see on the streets.

Hopefully we can have a more complete report soon. Keep checking

The anti-NATO protesters detained for questioning in Bucharest on Wednesday were nationals of Germany, Romania, Moldova, Portugal, Spain and Poland, Bucharest police chief Marian Tutilescu said in a press conference.
He said the bulk of the 54 protesters were Romanian and German nationals – 26 and 22 citizens, respectively.

The 17 women in the group were allowed to leave shortly after they were brought in for questioning at a police precinct in Bucharest, Tutilescu mentioned.

Several gendarmerie squads moved in a local plant on Wednesday afternoon and evacuated some 54 anti-NATO protesters who leased a production hall for the NATO summit, after several officers reported an incident between protesters and two officials with the plant.

The protesters were taken to several police precincts for questioning.

Save the assailants of the plant’s general manager and of a security guard, all the protesters will be released once the identification procedure is over, Tutilescu said.

“The other persons will be released immediately, with no other contraventions considered or any of their materials being confiscated, provided they have no nationalist or illegal characteristics,” Tutilescu said.

The chief of police said the intervention at the plant was conducted exclusively by gendarmes and that he cannot give any details about the actual operation.

Asked about one of the women in the group who was taken to a hospital, Tutilescu said the woman has twisted her ankle while getting in a gendarmerie car.

Demonstration
Info 02.04.2008 - 18:23
The protesters decided to walk from precinct 11 to precinct 12 after finding out that one of the protesters was supposedly hurt during the intervention of the law enforcement, without benefiting from medical assistance.

They walked the distance between the two precincts holding banners that said “This is how democracy looks like? Police and Army against citizens-2008” or “Free Anti Militarists, close the NATO".

Earlier in the day, Razvan Martin, program coordinator within the Press Monitoring Agency was detained by police officers and taken to precinct 10 in capital city Bucharest. 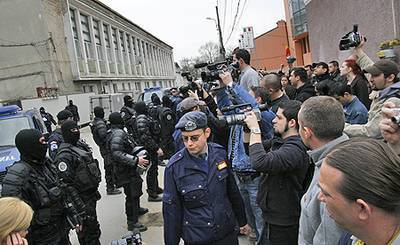 about 45 people have spontaneously protested in Berlin against the treatment of anti-NATO protesters in Bucharest. They were carrying banners saying: No NATO- no border and that Rumania would outlaw freedom of opinion during the summit. The same comment on Indymedia Germany also states that it seems that all arrested would have been released by now.

Latest news about the treatment of the detainees

approximately 60 people gathered at police station no. 11 for a spontaneous protest against the abusive actions of the police forces.

afterwards, they moved on to station no. 12, where an anti-nato activist had been seriously injured by police and was refused medical assistance. as long as the cameras of photojournalists provide some protection, people are able to protest on the spot. but as soon as the journalists leave, citizens are facing the danger of being arrested and taken inside. as a result of public pressure, the wounded protester received medical attention.

according to the statements made by activists who were present at the timpuri noi location, many of them were beaten by the police.
as soon as the gendarmes entered the space, they started kicking and hitting people left and right. to the press: that's why the clothes of many of the activists were very dirty.
one of the participants was assaulted quite badly and he was in need of medical care. but the police thought it more appropriate that he be held at the police station and he was released only 5 minutes before the press arrived, so as to raise no suspicions since the journalists had found out that there was someone who was badly hurt.
another girl has said that she received two kicks to the head (just hard enough that there wouldn't be any traces).
another thing: when several supporters of those arrested came to stand outside of the original location, and after all the journalists had left, an order came that those people be arrested as well.