This morning, eight activists from Oxford have successfully disrupted work at a coal-powered power station in Wales.

The group have helped blockade entrances to Aberthaw Power Station in Barry, Wales. This is to
raise awareness of the devastating affect that Wales's biggest polluter has on the planet. [1]

The group are acting in solidarity with current actions against the Ffos-y-fran opencast coal mine in Merthyr Tydfil, South Wales. Aberthaw power station is burning coal extracted from the controversial mine[2].

Deborah Locke, 30, who is one of the activists currently blocking the road said,
"Climate change is the biggest issue of our time, and we all have to power to take action to halt climate catastrophe. We are acting in solidarity with activists and locals in Merthyr where the mine is not only environmentally devastating, but is also dangerously close to where people are living."

RWEnpower own Aberthaw power station, and also Didcot Power Station in Oxfordshire. Didcot power station is at the heart of a debacle that might see local beauty spots Thrupp and Bullfield Lakes filled with pulverised fuel ash (PFA) from the plant.[3]

"Another reason why we have come here today is to highlight the link between big business and climate change. Scientists reckon that annually, around 400,000 deaths are directly linked due to inhaling soot. Also, coal has a devastating affect on the climate, around 150,000 die every year due to climate change. We just cannot go back to the coal age."

The activists plan to blockade for as long as possible.

Notes to Editors
[1] Aberthaw Power station is a coal-powered station situated near the coast of Wales. According to Friends of the Earth Cmyru, in 2006 it produced seven million tonnes of carbon dioxide emissions. In 2007, it was deemed to be number one of the top ten biggest polluters in Wales (Lisa Jones, 'Aberthaw is Wales' biggest polluter', South Wales Echo, 07/12/07)

[2] More about Ffos-y-Fran can be found at 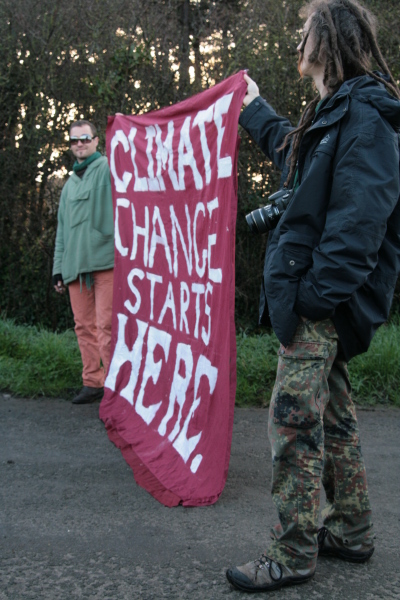 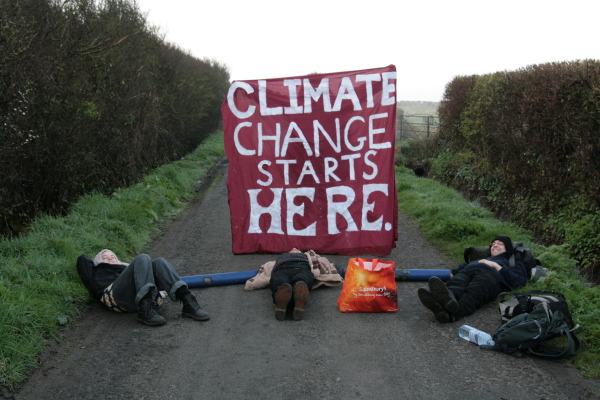 Smiles for the camera from the intrepid blockaders 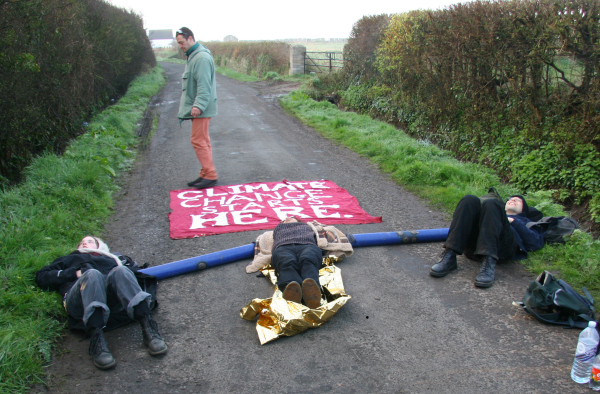 Day out in Wales ends in lying on the road 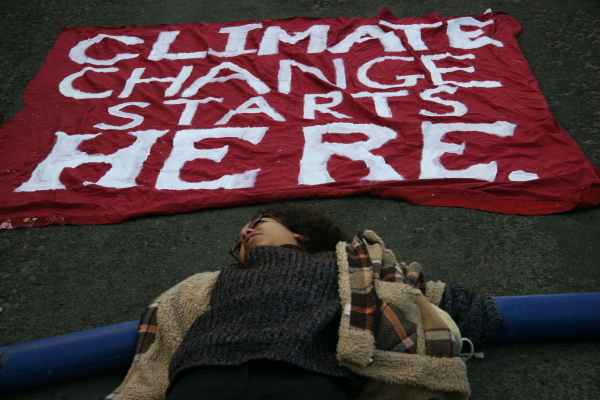 Getting comfy on the concrete. 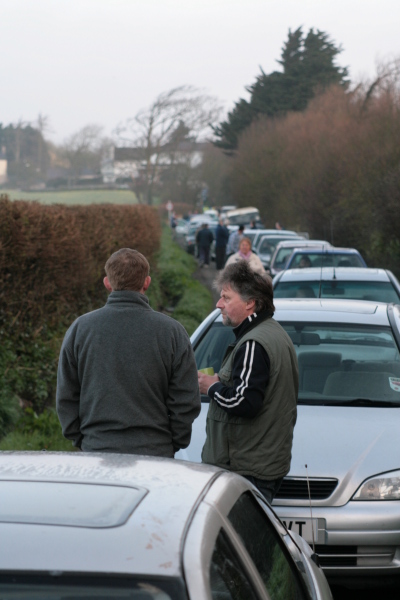 Tailback and staff are sent home.

Activists from Oxford, Cardiff, Bath and members of Bristol Rising Tide blockaded the Aberthaw Power Station in the Vale of Glamorgan causing a tailback of around one hundred cars. Staff were sent home by RWEnpower and there were no arrests. We last heard that the activists were sitting in a cafe...