The police were today acting in a blatantly political manner to try and sideline Tibetan protesters as well as making themselves and the olympic procession look quite absurd. 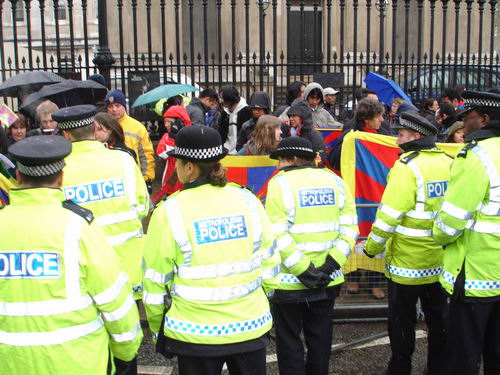 Cops surrounding and pressuring pro Tibetans off the pavement 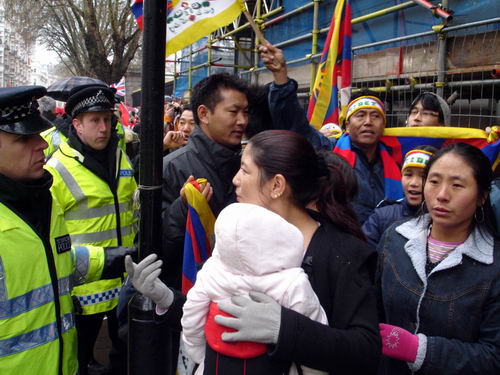 Evicted and being forced towards sheep pen 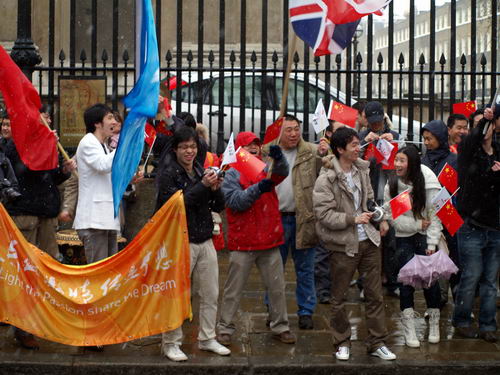 Jeered away by Chinese students 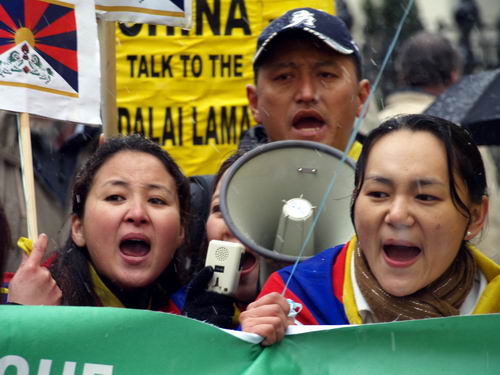 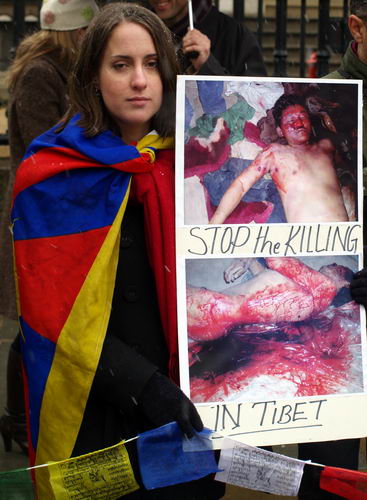 Shocking goings on in Tibet 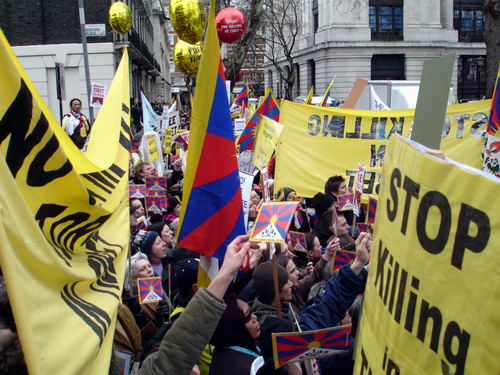 Life in the sheep pen 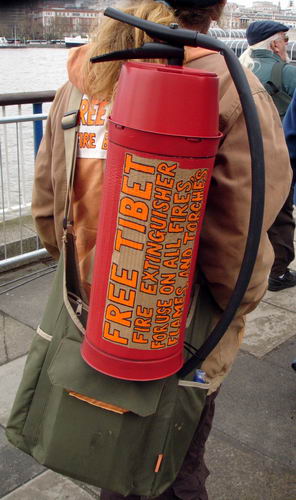 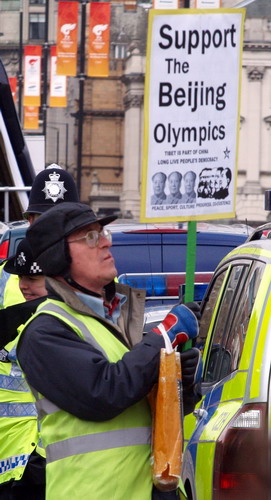 but not this Maoist fossil 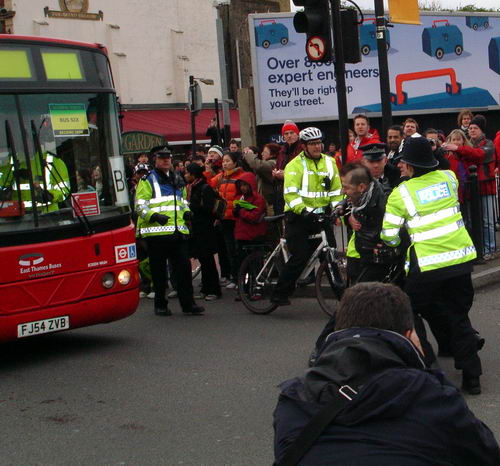 Violent arrest outside the Blind Beggar

It was possible to experience just a little of how it must be to live in Tibet today and I'm not just referring to the snowy morning weather in London. Anyone who brandished a Tibetan flag or pro Tibet placard immediately attracted the attention of those in dark uniforms. I joined the route where it would pass the British museum and it was apparent straight away that Chinese students and ex-pats were out in force. Amongst the throngs of Chinese supporters, there were small entirely peaceful lines of pro Tibet supporters. But slowly and gradually the cops started requesting and cajoling the pro Tibetans to join a wretched little sheep pen in a side road off the main route. Some of the protesters who knew their rights better than others resisted moving since they were causing no grief to anyone. If there was any atagonism it was coming from a Chinese guy in a white jacket who along with his gang, was being quite annoying towards them with an olympics banner. When the cops realised they weren't going to persuade this last bunch of protesters they ordered them to move and started to push them along the pavement towards the others already crammed into the pen. It was a blatant and shameful piece of route image sanitising but I suppose one should never be surprised to see the cops instinctively siding with the most powerful and aggressive in this world. The 200 or so Tibetan protesters in the pen made up for having been shunted into a side street by making a tremendous noise and a great outpouring of raw emotion that the mainstream journos seemed to find particularly appealing as they ignored the predictable Chineses supporters and formed a dense scrum of cameras and mics in front of the most noisy of the native Tibetans in the front of the pen. As the burning stick approached the cops pressed tighter up against the pen and you could see some of them holding green bottles of pepper spray at the ready and at one stage they had a coach parked in front of us. There was so much noise and confusion that I wasn't even aware that the runner had passed and the cops suddenly let us out of our prison pen.

Sadly I missed all the action around Whitehall but the next stop after was the south bank where Livingstone had arranged some crazy song and dance number on the Festival hall terrace featuring scantily clad women who one could only feel sorry for as there was still snow lying on the ground. Next contact point for me was along Fleet street on the way to St Pauls where the cops seemed to have been given a particularly large dose of testosterone as they furiously pushed me off my bike.

Back on my bike, I caught up with the burning stick farce once again in Tooley St approaching Tower Bridge. Well, by this stage you could barely see the stick at all through the ring of cops in black who encircled another ring of cops in flouro jackets who encircled a ring of completely paranoid Chinese olympic flunkies in yucky turquoise trackies who encircled the hapless stick bearer. He was closely following a wagon stuffed with media types with video cameras all pointing at him and who must have had no choice but to include this insane mass bodyguard in their footage. Some olympic dream. One could only laugh at the poor unfit cops who were having a really hard time being forced to run in the olympics themselves wearing their size 13 boots and thick uniforms and trying to keep up the same pace as the runner. They obviously just were not expecting to have to do any of this and they were having to be substituted out at frequent intervals which only slowed the insane procession down even more. This scrum continued across Tower bridge and along the Whitechapel road where, being wide there was plenty of opportunity for protesters to get right alongside. One guy heroically ran out and stopped right in front of the bus that was just about to carry the stick on the next leg to Stratford. The reaction of the cops was like something out of a film where the bad guy is about to destroy the entire world and just has to be stopped by the most desperate means. He was very violently jumped on and dragged away by cops who were clearly completely hyper and losing it by now.

I finally gave up chasing the stick at Canary wharf once it had been dumped onto a boat bound for Greenwich by Duncan Goodhew. It was here afterwards that there was quite a bit of lively discussion between the pro Tibet protesters and groups of presumably Chinese students. One would assume that these Chinese being intelligent and having been exposed to somewhat less censored media in this part of the world compared to their own in China would by now have a more informed view than other Chinese of just what was going on in Tibet but no, not a bit of it. To a person they condemned all BBC coverage as lies and anything that the Tibetans said as lies and propaganda. None of them would accept that a single Tibetan had been killed by Chinese but all insisted instead that the Tibetan monks had killed several children. Trying to even begin to get through to them that their own media was heavily censored and downright dishonest was like trying to argue with fundamentalist christians. Hopeless and particularly saddening to observe that anyone can choose to be so deaf and blind.

Watching some of the mainstream reports afterwards; inevitably they dwelled on "the violence", only lightly touched on the issues but of course none of them could avoid at least inferring that the whole day had been a PR disaster for supporters of China. Most striking was the ITV coverage which described how one of their cameramen was knocked to the ground twice by psyched up cops and repeatedly kicked while on the ground by them. One must hope they make a proper complaint.

One couldn't help noticing that all the flags, banners, blow up batons and other pointless tat supporting the olympics were absolutely covered in corporate logos. Somewhat worryingly, most people just don't seem to see anything wrong with waving giant inflatable batons almost entirely dominated by the samsung name and logo. Their cameras are rubbish anyway.

At the end of the day though I was left tremendously inspired by the way pro Tibetan protesters were constantly mobile and always present and highly visible and audible absolutely everywhere the stick went and the cameras were pointing. Often I get despondent at the apathy of British people to forgotten underdogs like the long suffering people of Tibet but today I came away really impressed by everyone's imagination, courage, and utter determination to get this important issue placed completely centre stage. Well done and great respect to all who took part.

And to all those who think politics shouldn't enter into sport - well I'm really sorry but thousands of people being beaten, tortured, forcibly sterilised and imprisoned while their country is ethnically cleansed, colonised and ransacked of it's timber and minerals is just way more important than running and swimming races. If only the IOC had said to China "Very nice bid for the games but your human rights record just stinks! Clean up your act and only then will we consider you as a host in the future". Imagine then how much the regime in China would just have to start changing its brutal ways. Instead the IOC at a stroke afforded the Chinese government respectability which is what they most desired in the world and effectively said that human rights are only a minor issue compared to sport. What a wasted opportunity to do real good.

Maybe some more pics to follow if I get time. I also have quite a lot of DV footage of the day but can't get computer to connect to camera. If anyone with more time and skills than me wants to edit and publish this then please shout.