The Israeli Army has decided to close down the Islamic Charitable Society in
Hebron, Palestine. They claim that the society is linked to Hamas and channels
money to terrorism but this is not true. The army has stolen a large amount of
food and equipment from the Society including computers and 2 school buses.
Food and bread for the orphans has been stolen also. 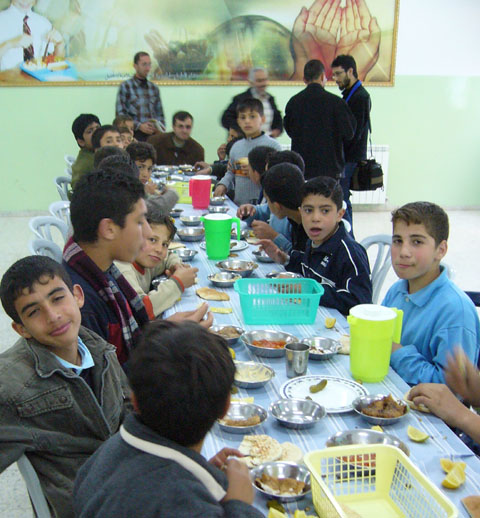 Families who rent from
the society have been evicted from their homes and many businesses have been
forced to close or relocate. Schools and orphanages have been given 7 days to
close from the 1st April 08.

The Islamic Charitable Society (Jumaiah Shumah Muslimeen) was founded in 1962
before the occupation of the West Bank and several years before Hamas was founded. Most of its members and employees are not members of Hamas but belong
to other political organisations or none at all. The accounts are published
every year and have been checked by the relevant Israeli authorities. There
are no irregularities. All the money raised for charitable works has been accounted for and has gone to the purposes inteneded.

In Hebron the Society operates 3 schools and 2 orphanages. In the districts
around Hebron they run another 5 schools, caring for a total of 7,000 schoolchildren and 3,000 orphans. They also extend help to a large number of desperately poor families. I have visited schools and orphanages for both boys and girls and was very impressed by what I saw there. The pupils seem very happy and the orphans are well fed. The boys’ orphanage is a very impressive new building and I shared lunch with them there. The boys were somewhat rowdy as you might expect; clearly no excessive discipline or religiosity.

The curriculum and books used in the schools are the same as those used in
Palestinian state run schools. Both pupils and teachers denied that there is
indoctrination or that they are taught to hate Jews. As several people pointed
out it is the behaviour of the Israelis that causes people to hate them.
Teachers never feed such ideas to their pupils.

The Society raises money from mosques abroad, including the US and UK. The
UK charity InterPal has given substantial grants to the orphanages. They invest
much of their money in property and use the rental income for their daily expenses. The businesses and families who have been evicted have no connection
to Hamas. Their only crime is that they rent property from a society with
Islamic links. I visited one of my wife’s aunts. She and her three children
had been given 24 hours notice to move. Her husband is working abroad and
she has poor health. She had managed to find another flat but looked exhausted
from the ordeal.

Two of the businesses, Mama and Pretty Woman, appealed the decision to the
Israeli high court. The order to evict has been suspended but not revoked.
They argued that they had spent huge amounts of their own money in refurbishing
their shops and were being unduly penalised for something they have no
involvement in. The threat of closure makes it hard for them to continue in
business. The army has threatened to impound all the stocks of any business
failing to comply with their orders.

Once again we see the Israeli army involved in collective punishment of
Palestinian civil society. In any other country this would be considered a
war crime and be prosecuted through international courts. It is only the power
ful protection of the USA and Britain that allows Israel to get away with such
blatant crimes against humanity. Please do whatever you can to pressure the
Israeli government and your own government to change these inhuman policies
.
In peace and hope,
Deacon Dave Havard