More trouble for the Olympic flame as it wends its way through Paris today
PARIS - Security officials have extinguished the Olympic torch for a second time amid heavy protests during the torch relay in Paris.

Police have escorted the flame onto a bus, apparently to move it away from protesters.

The flame was being carried out of a Paris traffic tunnel by an athlete in a wheelchair when it was stopped because protesters booed and began chanting "Tibet."

It was the second time Monday that officials extinguished the torch amid protests. The procession was apparently being continued on board a bus.

The Olympic flame relay descended into near-chaos for a second successive day today as officials in Paris were reportedly forced to extinguish the torch so it could be taken aboard a bus to avoid protesters.

Demonstrations began in the French capital only hours after the relay's procession through London had degenerated into a series of skirmishes between protesters and police.

Activists protesting against China's recent violent crackdown in Tibet began targeting the flame before it had even left the Eiffel Tower for the planned 17-mile journey to the Charlety stadium on the edge of Paris.

According to the AP news agency, the scale of the protests further along the route forced officials to extinguish the main Olympic torch in order to bring it aboard a bus.

The torch is lit from permanent flames enclosed within special lanterns carried with it. They can be carried on buses and planes and are used to keep it intact overnight.

At the time, the flame was being carried down a road alongside the Seine, where demonstrators had gathered carrying Tibetan flags, AP reported.

It was not immediately known what prompted the decision, or how the relay would resume.

The move is a further serious embarrassment to the organisers of the Beijing Olympics, who have seen the planned celebratory passage of the torch on an 85,000-mile journey from Olympia, in Greece, descend into chaos.

At least four activists, including two pro-Tibet protestors, were during protests in Paris today, the AFP news agency said.

As the first bearer, the former world 400 metres hurdles champion Stephane Diagana, carried the torch along the first viewing platform of the Eiffel Tower, an activist carrying a Tibetan flag got through security cordons before being bundled away by police.

When the torch emerged at street level, it was greeted by both cheers from supporters and shouts from several hundred pro-Tibet activists gathered nearby.

Initial progress was slow, with the relay halting repeatedly as riot police ensured the way ahead was clear.

The flame was more heavily guarded than it had been in London yesterday, barely visible inside a 200-metre cordon shielding it from any protests.

Police encircled the bearers with dozens of cars and motorbikes, 200 riot officers and another 100 tracking the convoy on inline skates.

Police boats tracked the progress of the relay on the Seine, with a helicopter keeping watch overhead.

Further protection came from a close cordon of blue tracksuited "flame attendants" provided by the Beijing organisers, widely presumed to have been selected from the Chinese security services.

The flame's progress through London yesterday was slow, violent and occasionally farcical as protesters repeatedly attempted to disrupt the relay.

One activist almost snatched the torch from the former Blue Peter presenter Konnie Huq before being wrestled to the ground, while others briefly managed to turn a fire extinguisher on the flame. Police made 37 arrests.

Robert Menard, the head of Reporters Without Borders, which disrupted the flame's progress through Greece last month, said the group had amended its plans because of the heavy security, but promised something "spectacular".

Menard alleged that France had given in to Beijing over the increased protection, saying that "for a few hours, Paris will look like Tiananmen Square".

The Socialist party mayor of Paris, Bertrand Delanoe, arranged for a giant banner to be unfurled across the city hall, reading: "Paris supports human rights everywhere in the world".

When asked whether he hoped there would be a major protest in Paris, the French foreign minister, Bernard Kouchner, said he wanted "people to be informed" about Tibet.

In an interview, the country's human rights minister, Rama Yade, appeared to say that the president, Nicolas Sarkozy, would only attend the opening ceremony if China met certain conditions such as starting talks with the Tibetan spiritual leader, the Dalai Lama.

Yade later said she had been misquoted by Le Monde newspaper. Kouchner said today that no conditions had been set for Sarkozy's attendance, but stressed that "all options" remained open.

Some of the athletes involved in today's relay agreed to wear badges reading "For a better world", which French athletes also hope to wear in Beijing.

China had hoped the flame relay – the longest in Olympic history - would mark the start of a triumphant coming-out party for the world's most populous nation, marking its emergence as a major economic and political world power.

But existing concerns over the country's human rights record were exacerbated following major anti-Beijing protests in Tibet, in which exiled Tibetan leaders claim up to 150 people were killed.

The relay could become a long-running public relations disaster for the Chinese government, acting as a focal point for rights protesters.

Further demonstrations are expected when the flame leaves Europe for its next stop, in San Francisco, on Wednesday. 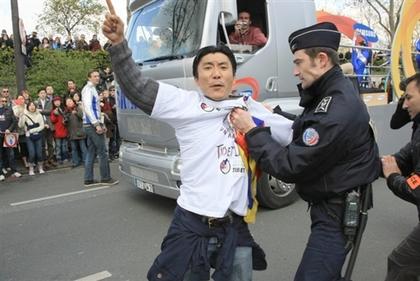 More trouble for the flame 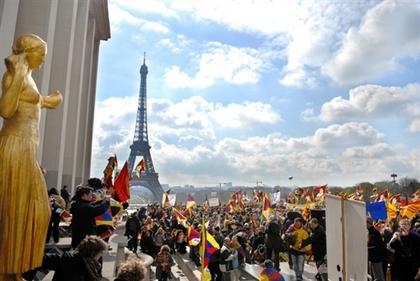 Some pictures of the kind of thing going on in Paris today.

Another pic of attempt on the flame, Paris 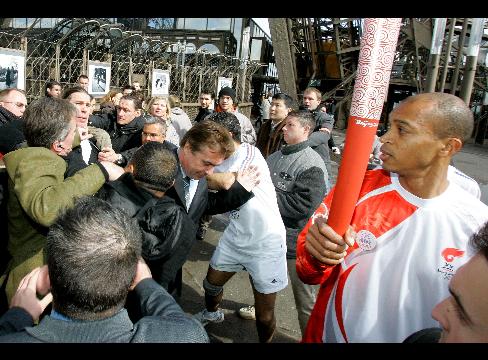 Security men tackle Green Party activist Sylvain Garel, third left at rear, as he tries to approach Stephane Diagana, right, the 400-meter world champion in 1997, as he carries the Olympic torch at the beginning of its relay from the first floor of the Eiffel tower in Paris

Latest as of 3 o'clock uk time

Chaos has struck the Olympic torch relay through Paris, with security officials extinguishing the flame three times amid raucous protests. Police escorted the torch onto a bus on three separate occasions over several hours, apparently to move it away from protesters.
Police tackled protesters to the ground and carried some away.

Each time security officials extinguished the torch Monday, they moved it aboard a bus afterward to continue along the route. The third time, police interrupted the procession as a precaution because they spotted a crowd of demonstrators on a bridge they were approaching.