Torch Went Out in London Too!

The French weren’t likely to be caught napping when it comes to kicking off so it’s good to see that the Olympic Torch protest was abandoned in Paris today (1). 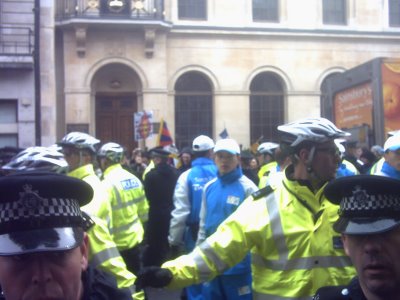 Before the Gallic pride gets too much however we’d like to point out that the Olympic Torch was extinguished in London first.

Our man on the ground fills us in:

“On Waterloo Bridge several hundred people began to chase the turch through the city and down Fleet Street. Many more people headed to St Paul’s to cut them off.

Nearing the Cathedral people streamed in front of the torch, which along with the people chasing behind effectively surrounded it. Looking over the torch was being carried by one of the Chinese officials (who looked like they were shitting themselves) and didn’t appear to be lit.

The old bill held the procession for a while which you can see in the pic below. Whilst this shot was taken the official was actually carrying the torch pointing downwards by his legs. The police then retreated suddenly and the Chinese officials were bundled onto a bus along with the distinctly unlit torch.

This reasons why the flame went out are unclear, however it seems obvious that they wouldn’t allow such a large naked flame on the bus.

This was not an open topped bus like those which has been used earlier, but a converted double-decker. It seems likely the flame was put out on health & safety grounds”