It’s time we had freedom to publicly assemble in the UK. The Campaign for Free Assembly is a group of individuals campaigning against the existing legislation restricting our freedom to assemble and the continued police repression of protest. 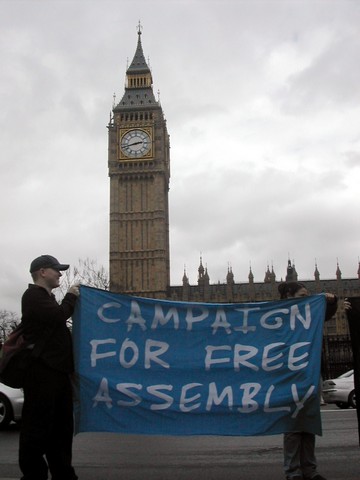 Last Saturday 5th of April we gathered at Trafalgar Square to once again claim our freedom to assemble in the UK. Around twenty of us held banners from the campaign and handed out leaflets informing passers-by on the existing and proposed legislations thwarting our ability to freely protest in this country. With us there were also a few police vans and the Forward Intelligence Teams. However, this time we didn’t get the same amount of harassment and intimidation they usually inflict on protesters. After an hour in the ‘Charles I Island’ (South Trafalgar Square) we moved with our banners into the SOCPA exclusion zone and went for a walk to Whitehall, the Home Office and Parliament Square, where we were joined by Brian Haw. Needless to say we were escorted all the way by a group of approximately eight police officers and a police van. We decided we didn't want to wait until this government’s finally repeals sections 132-138 of SOCPA in order to protest in the restriction area. We feel those laws, as with many others, are unjust and against our fundamental freedoms and, therefore, refuse to comply with them. The Campaign for Free Assembly will be holding a Day of Action on the first Saturday of every month in order to campaign against, not only the restrictions within the 1km designated area under SOCPA, but also all the other legislations and measures - as in the case of ‘dispersal zones’ imposed by the police - constantly being applied to suppress free assembly and protest.


Next Day of Action for Free Assembly: Saturday 3rd May. We will gather at 1pm at the ‘Charles I Island’, the roundabout on the South side of Trafalgar Square (fyi: this place is just on the border with the SOCPA exclusion zone).