After demonstrations and riots in Burkina Faso and the bloody repression of the riots (perhaps 200 dead) and demonstrations by young people and workers in Cameroon at the end of February (a hasty justice pronounced hundreds of judgments against the young people, sometimes rounded up randomly, of years in prison), it is the turn of the Ivory Coast and Senegal to undergo demonstrations, struggles and... repression. 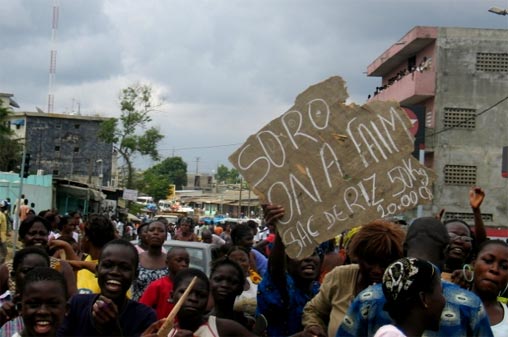 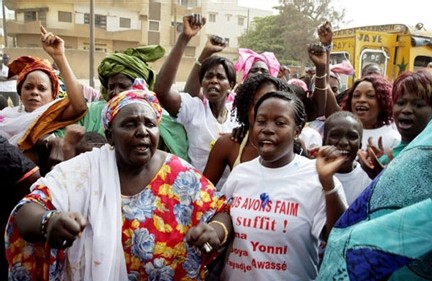 IVORY COAST: GBAGBO DANCES WHILE THE PEOPLE IS STARVING

On Sunday, March 30 president Gbagbo of Ivory Coast received his friend the “socialist” and former French minister Jack Lang. After giving him a medal, he took him along to one of the smart night clubs on Princesse Street in the red light district of Abidjan (in the immediate vicinity of another district, Yopougon, Wassakara, where to eat three times a day is a luxury) under the eyes of the television cameras, with the aim of showing that peace has returned to the country.
Overheated by the ambience, Lang recalling when as an expatriate prof he had made merry in these very places, took the opportunity to praise the “popularity” of his host and his qualities as a great “humanist”.

But for the poor population of Abidjan who cannot make ends meet this broadcast caused an explosion. The following day, housewives started to demonstrate from 9 AM and, joined by the youth, to erect barricades in the district of Cocody: “Gbagbo, we are hungry and you dance on Princesse Street with a white to show him that all is well”; “We came out this morning because enough is enough. We’re sick and tired of it. It is another form of war with which we declare to Ivory Coast”. “Gbagbo, we are hungry!” etc. (Le Nouveau réveil, Abidjan, 1/4/2008)


In the aftermath spontaneous demonstrations have broken out in other municipalities in the metropolitan Abidjan area and certain cities in the interior: Yopougon, Port-Boué, Attécoubé, Grand Bassam; as of 4 AM Tuesday, the demonstrators blocked the strategic crossroads in Port Boué with blockades, burning tires, etc.
Prices have indeed soared—sometimes doubling: denikacha rice rose from 200F CFA to 400F CFA; a kilo of meat rose from 700 F CFA to 900 F CFA in three days while in the same period of time a litre of oil rose from 600 to 850 F; milk, soap and other necessities follow, but wages, they remain unchanged!

Faced with these demonstrations, the great humanist Gbagbo and his Prime Minister Soro released their dogs: cops from CRS detachments attacked the demonstrators, firing live ammunition without warning at women and young people. In Port-Boué, in the shantytown of Gonzague city, one young person, Séa Abel fell, killed by a bullet from police of CRS 1.

In his televised speech after 2 days of demonstrations, the so-popular Gbango has nothing to say to the dozens of wounded and the young demonstrator killed. He will announce the temporary freezing of the customs duties for a range of imported basic commodities and the strengthening of the fight against racketeering.
These are measures that will not significantly improve the situation of the population in a country where a bourgeois minority build fortunes in the exploitation of agricultural raw materials (fortunes placed under protection in French banks or other)...

On Sunday, March 30 Senegal has also witnessed a demonstration of housewives in Dakar against the high cost of living: “Rice is really expensive, oil is expensive, the government does nothing. We are tired of it, we don’t have any work, our children do not have work, we try to manage to eat, we can find nothing to eat, we are hungry, thirsty, we are really tired of it,” said one demonstrator cited by Reuters.
The government answered this demonstration with repression. The use of tear gas and tasers by the police has provoked the worst skirmishes in the Senegalese capital in ten years. Walf TV, a private television channel broadcasting images of cops beating demonstrators, was searched and tapes seized. Several people were arrested.

President Wade (politically close to the French right) reacted with yet another cabinet reshuffle during which the Minister of Interior was dismissed and he appealed to Landing Savané and Mamadou Diop Decroix, two leaders of the And Jëf party. This party used to call itself “Marxist-Leninist” and Landing Savane was not so long ago a leftist presidential candidate... Savané and Decroix come to lend their support to Wade at a time when he inflicts repression, accuses teachers and students of conducting “political” strikes “without foundation”—he “decreed” that the academic year would be a “white (lost) year” because of the strikes, even as the workers multiply their strikes and work stoppages (see the 12 days strike of workers from Nestlé Senegal in late February against dismissal of a delegate, and despite police repression).

According to statistics, almost half of Senegalese households are below the official poverty line; half of the workers are paid below the minimum wage, the rate of unemployed and under-employed is 43%. Meanwhile inflation has reached new heights. Under these circumstances, it is not surprising that a recent report by the World Bank had raised the possibility of "riots" in Senegal! But the government is more interested in lavish spending that fills the coffers of those close to the president than the situation faced by the masses....

The Intersyndicale CNTS, CSA, UDTS, UTS, called on workers to mobilize to demand a “general increase in wages” and the “immediate” lowering of food prices and the cost of essential services. But isn’t this the same federation that called for the emergency suspension of the call for a general strike earlier this year, expressing its confidence in the government? Also, its “action plan”, turns out to be actually a “campaign of information, awareness and mobilization” from 5 to 15 April. According to the secretary of the CSA (Confederation des Syndicats Autonomes): “The only certainty today is that the workers can no longer wait.”

But as a matter of fact they must wait until the unions hold a “comprehensive evaluation meeting” at the end of their campaign; and the trade union leader urges the government to show "more foresight and responsibility" (Le Soleil, Dakar, 30/03/08). In short, do something so that we are not obliged to call for struggle!

In Africa also the workers can count only on their own struggle and their own organization to resist the capitalism which exploits them and which starves them!

All these countries form part of the “zone of influence” of French and western Imperialism: it supports and arms the regimes in order to continue to do profitable business thereof them the modes and arm them, in order to be able to continue to make profitable deals there (like Bolloré, the billionaire who, from time to time, does not hesitate to lend its yacht or his plane to Sarkozy, the proxy holder of French capitalism).
The fact that the western media, so prompt in being indignant at the repression and the crimes committed by others, for example by China, never speak about crimes and repression in these countries, is the consequence of this imperialist domination.

There as here, the proletarians have the same enemy and the same anti-capitalist struggle to wage!
International proletarian solidarity!