Entering the threatened Forest in Oaxaca.

Upon entering the forest one of the villagers gave us some of the history of the region as well as the recent events which had ended so violently for the local people. Visitors were encouraged to ask questions and verify any facts about the situation which were unclear. The forest itself is breathtaking and stretches up the mountain as far as the eye can see. The companero gave a pretty detailed account of what happened during the repression and also named the man believed to be responsible for the confrontation to begin with and the deaths that resulted from it.

We were also shown a tree that had been placed across the road by the villagers from San Isidro Aloapam. Its purpose was to stop armed paramilitaries from the nearby town of San Miguel from attacking the village by road in pickup trucks. The closure of the road has added over an hour to the journey made by villagers wishing to reach Oaxaca city. 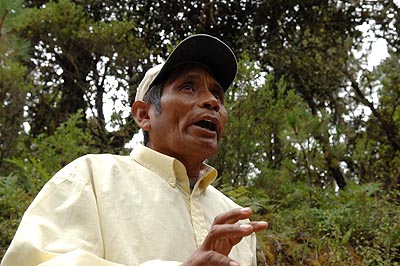 The companero gives us his account of what has happened. 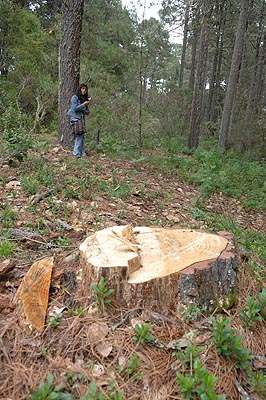 An illegally cut down tree. 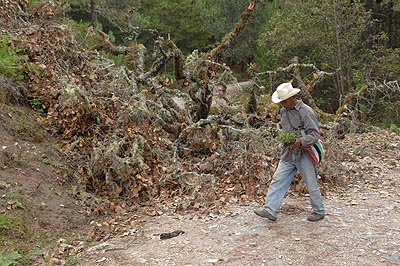 A roadblock to keep the paramilitaries away. 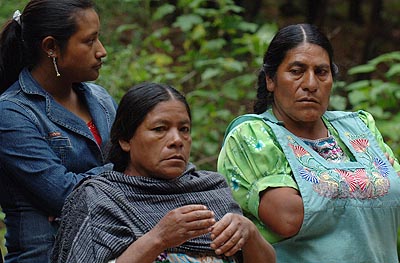 Many of the villager's husbands and sons are wrongfully imprisoned.

“I would like to tell you that for a very long time, since 1944 or even 1920 - if we go back in time – when our grandfathers left San Miguel Aloapam - their place of origin- to come and settle here in San Isidro Aloapam, they came with the purpose of defending this place and its borders with San Isidro Abejones. That’s the border line that we saw from the road as we were coming in the truck. That’s the line that marks the border with San Isidro Abejones, which is in between San Miguel Aloapam and San Isidro Aloapam. During all these years this area of the forest has been principally protected, why? We want to preserve this area because of the variety of animals, mammals that inhabit it, and the variety of trees, like pine trees, “oyames”, black oaks, white oaks, cedars, strawberry trees, ash trees, and we have been preserving all these.
On this side of the forest there are fields where the people of San Isidro grow maize, potatoes, beans, wheat… but in August 11th 2002 as the people of San Isidro came to work the fields, some 700-800 people from San Miguel Aloapam came to reforest these growing fields. It was then when they beat up the women, as it was only women working here at the time. We, the men were working on our own tracts of land. A few of our companeros came up and it was then when they took them, five of our companeros were detained and taken to prison. The women were beaten on that spot that we can see from here, few of the women of San Isidro Aloapam miscarried right there as a consequence of the beatings from the thugs of San Miguel Aloapam. This is all as a consequence of the situation that has been created where our authorities, our companeros have been imprisoned, myself I spent a year and nine months in prison, and another month back in 2000, and all for just defending the agricultural rights of the people of San Isidro Aloapam.

There was a legal process at the courts in which we reclaimed the acknowledgement of the rights of the inhabitants of San Isidro Aloapam. The court ruled in our favour. We won. But San Miguel Aloapam appealed, they were cutting down the forest every year, on average 30000 to 35000 sq metres a year, with the gains they try to buy justice, to bribe the officials that hold the documents relating to our case. Since the year 2000 many of us have been imprisoned, from those days until now we have been enduring harassment like the events that took place on July 18th on that area there – we will walk through it later – where they started to cut down trees according to them to sanitise the forest due to a plague that was growing there. That wasn’t the real intention; their intention was the logging of this virgin area of forest that we have been protecting - as I said earlier – for many years. But now I would like to let the others speak for themselves, because we are all involved in this, no one is “innocent” here, and no one can say that they don’t know what the problem is. We all live here and have been born here; we all have grown up in with this situation in which we find ourselves.”

(We move further up the track)

.-“I would like to point to the companeros and journalists from different organisations that have come here that this is the very spot – where we are standing right now – in which the president the of the council of San Miguel Aloapam - surrounded by all the other people from there - pulled out his gun at shoot it to alert his people who also started firing, that’s how some of them died.
We, from San Isidro, we were just about 40 or 50 and the majority were women, so such a small group as ours how is it that we were going to be a threat to a group of between 5 and 700?

They killed their own people. It was in this place were they tied-up Mr. Artemio Perez Cruz, Octimio Mendez Lopez, Anastasio Lopez Perez, Alejandro Morales Perez and Juventino Cruz Perez . Mr Santos Perez Cruz, as my companero mentioned earlier, was apprehended afterwards on a path about 7 kilometres from here.

I just want to remark that this is the place were the 18th of June incident took place.
And as I mentioned before on August 11th 2002 it was also at this same spot where our companeras miscarried their babies as a result of the beatings received from the people of San Miguel Aloapam.

That is why we have come here, as this is the zone were all these incidents have been taking place, to show you, so you can film or take notes and spread the news as we are trying to do and as we are asking you to do. We want the government to listen, and not to turn their faces on the indigenous peoples. As my companero said, we do not have money to buy justice and that is why our companeros and women are still in prison. We are trying to defend them through the organisation Indigenous Popular Council of Oaxaca – CIPO-RFM Oaxaca. It is the only means we have to organise and defend them while our companeros unjustly still in prison. They were just caught, tied-up and taken from here. Imagine! We were just a few among hundreds, how could we have killed them, it was here where the president pulled out his gun and gave the sign to the others who came with him ready to start shooting. It was organised. But it was them who were killed and injured.”

.- What’s the name of the president of San Miguel Aloapam?

. “Fidel Alejandro Cruz Pablo. He’s the one we consider responsible and have declared this in our demands and proceedings. He’s the one who brought all those people here, and he is the one that fired”