Miguel is an organiser for CIPO-RFM. In this interview he explains the history of the forest dispute and the possible implications for the village of San Isidro Aloapam if the logging is allowed to continue. 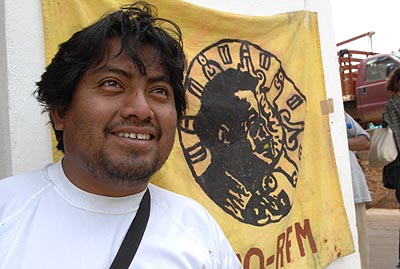 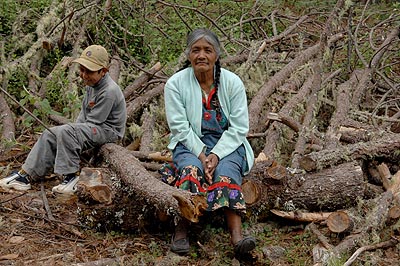 He explains the effect on the communitiy of illegal logging. 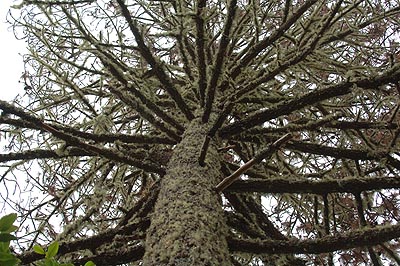 Also how diseased trees in the forest... 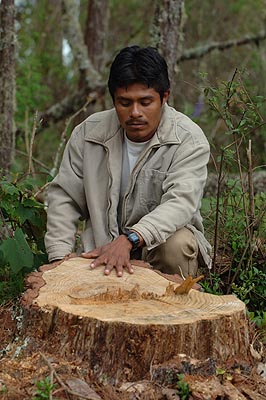 ...gives the loggers an excuse to cut down healthy ones.

First can you give us your name and position?

My name is Miguel Cruz Moreno, I am part of the organizing committee of CIPO-RFM

What is the name of the mountains near San Isidro?

The north range of the state of Oaxaca. It here where San Isidro Aloapam (SIA) is Located.

Where is San Isidro in relation to Oaxaca?

It is about 3 hours drive north of Oaxaca. It is an indigenous community of Zapatec speaking people.

Is the area where we saw the logging/destruction protected?

The forest of SIA is a virgin area where you can find two water springs. It is a part of the forest known as ‘Agua Palomas’ and ‘Cerronariz’. These are two virgin areas where many species of animals and plants live. These parts of the forest have been protected by the people of the community of SIA for a long time, dating back to 1910. That is the year that the village was founded. And ever since they have been protecting this part of the forest. But now they are facing a big problem and the excuses given by the loggers of San Miguel Aloapam to come and plunder the forest. There are plundering this forest under the pretension that they are cutting down diseased trees. At the same they are cutting down healthy trees. The pretense is that they are lawfully working the forest. There is no adequate care or protection.

The American corporation behind the logging is it allowed by the government to exploit parts of the forest but not those protected by SIA? Where we went?

This paper company had a contract many years ago for 25 years to exploit part of the Forest surrounding SIA. But in 1982 the company was told it could no longer exploit the forest as the contract had expired after 25 years. This paper company through the government is now implementing a project known in the community as ‘Units for the Exploitation of the Forest’. These are companies administered by landlords and PRIistas (local businessmen and paramilitaries loyal to the violent and corrupt PRI party) and they are protected by the Police to carry on exploiting the forest in SIA. What this means is that politicians, landlords and paramilitaries have access to log the forest and directly deliver the wood to the paper companies or to what they call ‘transformation spaces’. All the wood obtained from the forest is sent to a ‘transformation space’ or so they say.

What is the name of the polluted river?

It is known as the ‘River of the Virgin’. The river that runs down in between SIA and San Miguel. Ten years ago when it was the rainy season we could not leave the community and cross the river towards Santa Anna on the other side. That was ten years ago and today the river known as ‘River of the Virgin’ is completely dry during the rainy season. Which is now. There is not a drop of water in it. Black water coming from the San Miguel drainage system runs directly into the river. So the little water that does appear during the rainy season is being polluted by the sewer water of the PRIistas. So the community of San Miguel is polluting this river, which runs through many other villages. Known as the villages of Rio de la Virgen’ or ‘Gordo Range’.

So tell me a bit about the violence from the paramilitaries towards the people of the village of San Isidro Aloapam?

There is a history of defence and struggle for human rights in SIA. This struggle has always been peaceful and we always kept this struggle within the law. In court houses and houses of law within the state of Oaxaca. Also at the federal level within the country of Mexico. But we have always been denied justice. We are facing three big problems in our communities the first regarding the acknowledgement of our rights as ‘comuneros’.

Within an indigenous community the ‘comuneros’ are recognized as a party with a right to use and enjoy the territory. But we are not recognised as such. Our demand to that right is bringing upon us the attacks from paramilitary groups and federal and state forces. Once we a re granted rights as ‘comuneros’ we can use and enjoy the territory. By territory is meant Air, Soil and Subsoil. Everything that is found in the territory that we inhabit and have looked after for years. One big problem occurring in Oaxaca and its been happening in every corner of the state for many years (and in the north range and SIA in particular), there has been for years an uncontrolled process of exploitation of the forest.

The government of the state has been supervising this. We demand that they stop authorising this. It is destroying the two water springs in the area and also is the only virgin forest left in out territory. Also because there is no adequate control of that forest exploitation because there is a financial factor that it leaves a lot of money in the pockets of corrupt civil servants. Paramilitary attacks come when we go to defend the forest because that is the tactic they use when they want to enter the community or the mountains. They arrest us and assault us, trying to intimidate us and frighten us into giving up our rights. On top of the paramilitary attacks we are also facing accusations and lawsuits against the inhabitants of SIA. The state is accusing us of blockading the communication roads. They accuse us going and collecting firewood. They accuse of causing trees to fall down by walking in the forest. So the government is using the law to put pressure on us as well. They are trapping us on two fronts. One by sending the paramilitaries and then when we make legal claims no justice done. Because the law is bought by all these corrupt civil servants who are benefiting from the logging. Wood produces a lot of money. They are making more than 43,000,000 pesos a year. So you can imagine where is all that money going. Meanwhile there is no adequate development for the people. There is no electricity, there are no schools, there are no health centres there are no medicines there is nothing. It is because of all this money that they are making that they attack us with these paramilitary groups and these laws.

So the illegally logged wood is being sold in America?

All we know is that there is a corrupt relationship between all these transnational companies. Here they are using aliases. It is because they want to exploit not only the wood, but also every other resource in the forest.

How does the logging affect the community?

We are beginning to feel the affect of this uncontrolled exploitation of the forest. Here we usually start plant the Maize in May. When the maize is tall it needs water. But there is no rain. So the logging is affecting the atmosphere or air. There is an imbalance of the eco system. There is no rain as there used to be five, six, ten years ago. The second is the river; it does not carry water anymore. This great river that we once could not cross. The ‘River of the Virgin’ is now dry. The springs are drying up, the waters does not take its natural course anymore. The other important factor concerning this virgin forest of ‘Agua Paloma’ and ‘Cerro Narriz that we are defending now is the springs. There are two very important water springs there for the community of SIA. If the forest is lost and these water points dry up, no water will reach the community. We could not wash, cook, drink and we don’t know where we could go to find some water. We would have to ask other villages permission to share their springs. We can have it in our own territory. So this is the impact of clandestine and illegal logging by San Miguel in out territory. Another big problem is the ambition and corruption that has grown in the authorities of San Miguel. There is too much money involved and they are using the people of San Miguel. They are paying and arming these paramilitary groups with a share of the money that is made. This is destroying the fabric of the community of San Miguel, which should be an indigenous community. All this circulation of money is bringing in corruption, envy, greed and aggression towards the neighbouring community of SIA. All this corruption, lies and injustice that you observe in cities and the state apparatus. It is being transported now to the indigenous communities. In this case it is because of the logging.

If this continues what will happen to the community?

Right now we have a big problem. We say that if this continues without the forest being protected then many things could happen. There could be a confrontation where there will be more deaths in SIA. Or more arrested in the community of SIA because we WILL continue defending the forest peacefully. And if they come to the forest we will go there peacefully. We are thinking of chaining ourselves to some of the trees in the community to prevent them being cut. To prevent this clandestine logging. Another thing that could happen is that they will destroy the forest. And in five years time it will be gone. We think that for federal and state government to make more money they will have to grant San Miguel permission to exploit more of the forest. They could make another 50-70,000,000 pesos to share betweens themselves and to finance their political campaigns and their paramilitary groups and Police. So another two or three years of San Miguel paramilitaries logging the forest means the water will be gone. The animals will die, everything will be lost. At some some point with this turn of events the community of San Isidro Alopam with disappear. Because if there is no water, no rain the land cannot be farmed and the only option left will be migration and leaving these lands. This is one of the risks we see. The disappearance of our community if this part of the forest continues to be logged.