The legality of illegal logging.

The companero pictured below talks not only of the legal battle to secure the future of the forest but also about the corruption they are fighting at the highest level. It seems more than probable that someone in the local municipal environmental offices is being paid a backhander by the loggers to break the laws that he or she is paid to uphold. Another fear the villagers have which seems well founded is that the tree disease (which the loggers use as an excuse for their activity) was deliberately introduced into the forest. It certainly seems convenient for the loggers that a previously healthy area of woodland has suddenly suffered an unexpected blight, which has given a green light to their activities. 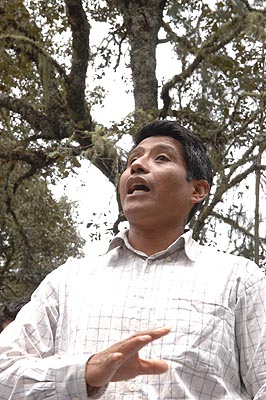 The companero explains that the tree disease... 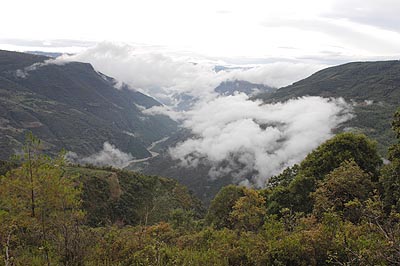 ...was previously unheard of in these parts. 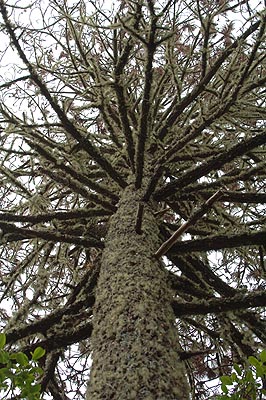 So was this done deliberately? 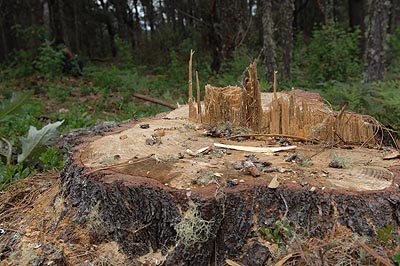 “So once more, we started again, with the Agriculture Tribunal, at our request they studied the same documents they had seen before which outlines our claim to protect the forest. On June 28th 2006 a ruling was passed in favour of San Isidro in which 104 comuneros from San Isidro are acknowledged plus another eleven with rights [over the land]. That was the ruling. It was made on the 2nd Tribunal of the 13th jurisdiction of Oaxaca. And it was ratified as legal, definitive ruling on January 22nd of the current year.
And so we at present are the owners of about 13.518.43/4 hectares of communal land in this area.
San Miguel Aloapam is acting illegally with the deforestation they are causing. Last year we arrived at SEMANART offices, and PROFEPA, we went there to ask for the treatment of the outbreak* because it was a small area (tree disease being used by the loggers as an excuse to violate the law). As my companeros said, we are protecting the forest. There are virgin areas around here with trees as big as 4mtrs in diameter. We started to suspect, and now are even more suspicious that these people from San Miguel Aloapam brought this poison to this area. This was a healthy forest it’s been only a few years this plague seems to be affecting it. We think they are trying a different way to exploit the forest.

And so this is the way we live now in San Isidro, we are not defeated yet, we are being killed, yet in peace, but while we remain alive, standing or falling, we will not allow them to continue. The water we were drinking yesterday at the village, all comes from here. If we allow the end of the forest, what kind of mother land will we leave to our children?

So I say that San Miguel Aloapam vilely wants to ignore us. But we act according to documents in our power. Last year we arrived at SEMARNAT offices and CONAFOR, where we solicited the treatment of this outbreak. We have the act from an assembly, signed by all of us, asking for the treatment of this outbreak to be managed by National Commission – CONAFOR – as this is a conflictive area of land. But it does not suit them. Why? – Because San Miguel Aloapam is offering money.

And so from there, in a meeting attended by the Secretary General from the government, SEMARNAT, PROFEPA and CONAFOR, we reached an agreement of peace and tranquillity in a resolution signed by the municipal authorities, whereby the comuneros from San Isidro Aloapam will be acknowledged. And in an assembly to take place on October 18th we will be formally registered. SEMANART authorised San Miguel Aloapam the exploitation of an area not affected by the plague.

You have to realize the extent of the complicity between the federal and state government. The National Secretary General and the Secretary from SEMARNAT signed the minutes, authorizing San Miguel Aloapam. It was also signed by The Commission for Common Wealth, and Adria Mendez, now campaigning for deputy, but then as president of the municipality. All signed the minutes.
Soon they obtained the authorisation, for what’s about 37000 cubic metres, or the equivalent to approximately 39 million pesos. Companeros please take this message to those places where you come from. We are not talking blind here, we know from documents in our power. Last year San Miguel Aloapam pocketed 39 millions pesos from the 37000 cubic metres of wood.

Of those, at least 3 millions go to someone in SEMARNAT, surely it is just one, it is not 2 or 10 to pay. It’s just one crook. Ortiz Rodea was there, that is the lady that signs, authorises the permits. When they come to enter, we can do nothing. They have documents. It is the complicity of the authorities.

I do not want to bore you as there are many more instances we can tell you about, but perhaps we can walk around to see other places were they have been logging around here.
Finally, I’m just going to say that last year as soon as they obtained the permits, the assembly for our registration was never mentioned again. There is a ruling but no one is signing it because it is not in their interest. It is more on their interest to devastate the forest. Thank you to all of you.”