Demetrio explains how the loggers manipulate the law.

Demetrio takes us to a spot in the forest where the repression began. The ‘plague’ he refers to is a uncommon disease that afflicts trees in the forest and can destroy large areas if left unchecked. For this reason it is quite legal to cut down diseased trees in the protected areas to stop the spread of the disease. However the wood from such trees has little values compared to that of a healthy one. The loggers from San Miguel have clearly been using a small outbreak of the disease as an excuse to cut down healthy trees for profit. The first thing that struck us was how many clearly diseased trees were still standing while the stumps left behind by the lumberjacks showed no sign of any infection. 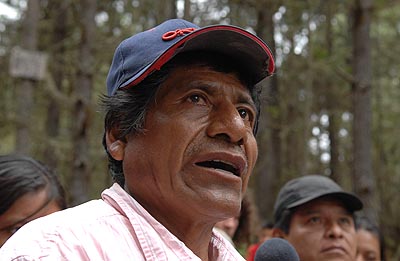 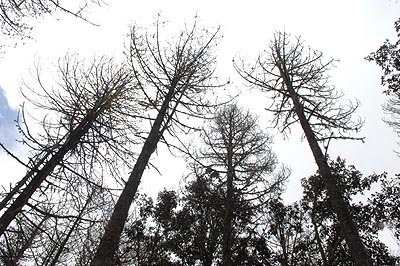 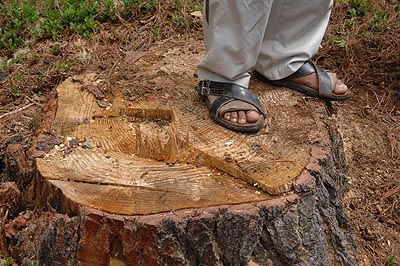 Healthy (more profitable) ones are cut down. 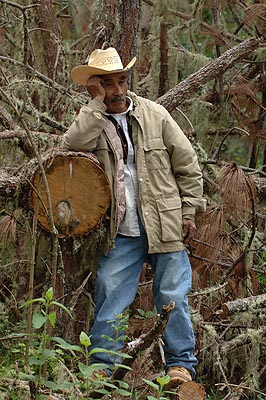 Much to the annoyance of the villagers who rely on the forest... 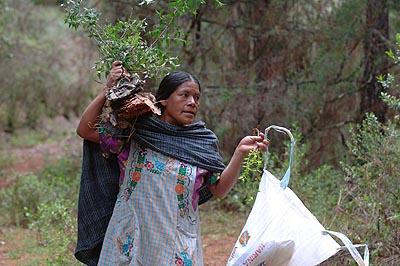 ...for a number of things including medicinal herbs.

“Well companeros, on June 18th when our companeros came to have a peaceful dialogue with the people of San Miguel Aloapam, they found that these people were on already on the alert to see if anyone was coming. A bit further on that direction they had people with chainsaws cutting down trees, but here on this spot there were many people about 500 of them, comuneros from San Miguel Aloapam guarding those who were cutting down the trees. Our intention was just to come and have a dialogue with them, as since 1995 the zone has been protected, it’s not an isolated area, several areas that have been named. There is an area of about 6500 hectares of forest that had been protected. But in the year 2006 with the influence and the deception of the government and SEMARNAT and with the complicity of the Commission for common goods- assets of San Miguel Aloapam, they took on 2000 hectares of forest inside a protected area.
And so this is the area - still protected - that on the 18th they came to log, according to them to “sanitise” the forest. That was the excuse they had to enter and cut down trees, like pine trees that were healthy.

So now we are going to walk around parts of the forest they tried to enter. There is an area here where there was a plague outbreak. But that has nothing to do with it, they had other intentions, with the excuse of sanitising the forest they tried to enter to destroy the whole forest. That was the real intention of the comuneros of San Miguel Aloapam.
I would like to tell you that on that occasion in this place they tied up and kidnapped 4 companeros and a woman, also another companero whose truck had broken down was taken along as he was trying to repair the vehicle. So at the moment there are 5 men and a woman imprisoned at the Oaxaca State jail, where they were transferred from San Miguel Aloapam prison. There they received death threats and were beaten unconscious. We demand the immediate release of our companeros who had done nothing and have been accused of homicide by the comuneros from San Miguel Aloapam. This people from San Miguel Aloapam arrived here drunk, they acted crazily, they came with their pistols and weapons ready, they killed each other and now are trying to play the innocent by blaming us for their acts they are trying to stain the case for our agricultural rights.

We have never thought that we’ll lose this case. We are natives of this village that we inherited from our grandfathers and we keep guarding this forest as you can see it, it’s not destroyed, it’s not logged. That’s how we want to preserve it. And we want a definitive suspension on the exploitation of the forest that SEMARNAT is doing in San Isidro Aloapam; because with that permit to exploit San Isidro Aloapam forest, millions of Pesos are made and used to buy justice. We have documents that prove that government officials have been bribed to act against our case.

We want a definitive end to the criminal processes against San Isidro Aloapam peoples. At the moment there are about 27 criminal processes open against us. The government, the paramilitaries from San Miguel Aloapam are silencing us with prison, taking away our rights. We don’t deserve prison, we are fair people. We don’t deserve prison but a positive response. The government should leave us in peace to live in our village, to keep our land, to preserve our forest.

If they keep cutting down the forest…rain is already scarce, the water springs are disappearing, and so are the animals, medicinal plants. They’ll end up harming human beings, not just from San Isidro Aloapam but at regional level. Now is the time to preserve our nature. That’s my opinion companeros.”