To raise awareness of the plight of the people of San Isidro Aloapam CIPO-RFM organised an international Encuetro or gathering attended by representatives of many different organisations including: 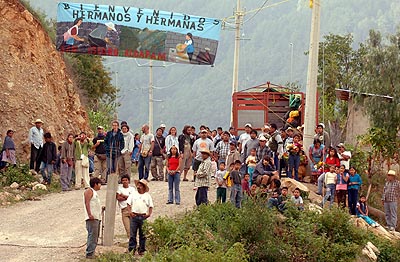 The villagers gather to welcome the activists arriving for the Encuentro. 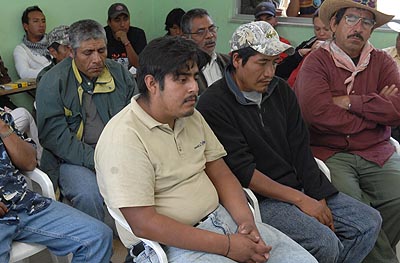 A series of meeting and workshops happened over two days. 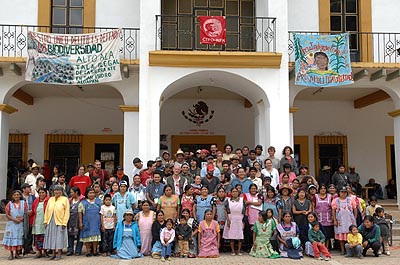 Group photo after the final session. 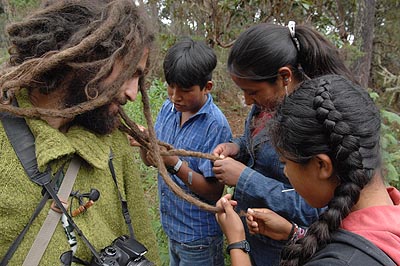 At the end of the gathering the following declaration was made:

Political Declaration of the Encuentro (Gathering) for the defence of the forest and the communal life in San Isidro Aloapam, Oaxaca.

We: men and women members of organisations, collectives and movements from the US, Paraguay, Brazil, Spain, Basque Country, England, Italy, Germany, as well as from, amongst others, the mexican states of Baja California Norte, Tabasco, Veracruz, Oaxaca , Jalisco Chiapas and the Federal District, gathered together with the community of San Isidro Aloapam, members of the Popular Indigenous Council of Oaxaca - Ricardo Flores Magon, during the first encuentro for the defence of the forest and the communal life during the 3rd, 4th and 5th od August 2007.

Our communities, peoples and nations, neighbourhoods and organisations suffer the exploitation of the land, the territory and natural resources. By gathering together and sharing our experiences, we could see how the plundering, the pillage, and the greed of the bad governments lead by the businessmen advance against the remaining forests, rivers and seas; natural resources that are sold as commodities thus destroying the planet, as well as our cultures and our communities.

An innumerable amount of resistances and movements are emerging to confront this exploitation, and to defend our mother land, humanity and ancestral patrimony. Although these struggles are characterised for an acknowledgement of the bonds between nature and human beings, at the same time they increasingly confront the violence, repression, persecution and death that the bad governments and the masters of money bring us.

San Isidro Aloapam is a dignified example of one of these struggles in defence of the forest, and for the construction of indigenous autonomy.

Resistance has sprung up in this small community of the Jurez mountains in Oaxaca to defend the forest from the depravation caused by the industrial axing of trees, instigated be the interests of a group of local landowners aided by paramilitaries from the nearby town of San Miguel Aloapam, and which count with the protection of the State and Federal governments.

The struggle in San Isidro Aloapam, as well as our own experiences in our different continents, countries and regions, have taught us that the defence of the land and the territory requires an alliance and fraternity between our resistances, as well as the reconstruction of our cultures and communities, together with the strengthening of our organisations at a local, national and international levels. It also
demands a resolute willpower to prevent the advance of Capitalisms’ project of destruction and death. But, above all, it requires the mutual support, solidarity and co-operation between our resistances:

Therefore, we have agreed on the following tasks in solidarity with,
and in support of the struggle in San Isidro Aloapam and the CIPO RFM:

To promote simultaneous protests and actions in our countries and
cities against the mexican government, and against the institutions
that allow the depredation of the forest.

To prepare a national and international encuentro (gathering) for
the defence of the land, the territory and the natural resources.

To divulge and to denounce the acts of violence and repression against the inhabitants of San Isidro Aloapam, as well as, the illegal plundering of the forest, and to do so using all available media.

Those present to the first Encuentro for the Defence of the Forest and the Communal Life, demand:

Freedom for all the political prisoners of San Isidrio Aloapam,
unjustly arrested on the 18th of June 2007.

The immediate cancellation of all arrest warrants against the
companeros of the community.

An immediate stop to the prosecution of the inhabitants of San Isidro Aloapam and the members of CIPO RFM.

The respect and recognition of the autonomy of San Isidro
Aloapam community.

The fulfilment of the institutional verdict recognising the inhabitants of San Isidro Aloapam community as the lawful depositories of the territory.

The punishment of those guilty of aggressions against the community.