The Space Hijackers and Metropolitan Police Cordially invite you to
Mayday.
Mayday 2008 is the 300th anniversary of the last free Mayday before the Grand Jury suppression of the traditional May Fayre in central London; a riotous, raucous celebration of fertility and freedom. From the 1st of May each year, and for up to two weeks afterwards, the people stopped working, rejected their normal routines then danced, drank, laughed and made love in the streets, jeering at the controlling figures of the Church and State, and turning everything they could upside down.

It was known as such "a nursery of vice and debauchery", that after 1708 the authorities, having had enough of this dangerous freedom and subversion, shut it down. Although there were some attempts at reviving it, the creeping spectre of gentrification made sure it couldn't continue, as the area of the fayre was gradually built over with palaces and playgrounds for the rich.

To commemorate this significant anniversary, and the still thriving tradition of over the top state control, the Space Hijackers and the Metropolitan Police proudly present a collaborative re-enactment of the end of this traditional May Fayre. Our modern-day interpretation of the cycle of uprising and suppression is in keeping with the attempted repression of parties, protests and gatherings enacted by the state throughout the ages.

In act one, the Space Hijackers will be inviting people to join a mayday street party in it’s traditional home, with music, bands, food and revelry. This will be later followed by the Metropolitan Police Players, who will be re-enacting a classic clamping down on civil liberties and freedom of the people.

The exact location of the fayre is still a closely guarded secret, however it will be revealed closer to the date on our website

Flyers for the event 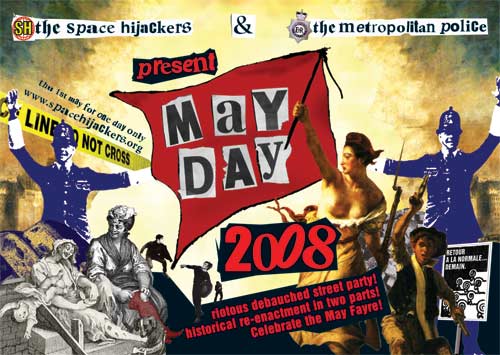 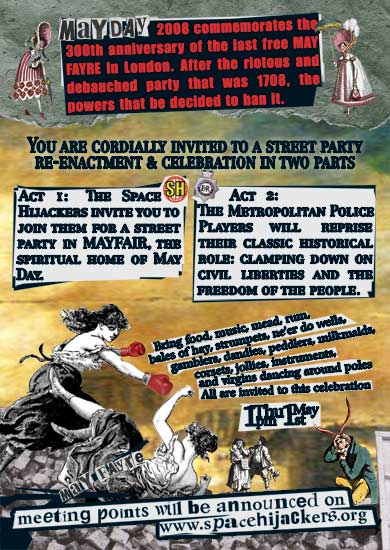 Here are the 'Official' flyers for the event.

STUFF YOU SHOULD TO KNOW