A success in every way! Audacious Space Leeds

This was posted as a comment to the UK feature on the days of action for squats and autonomous spaces but it deserves to be read as an article in it's own right so I've reposted it here... 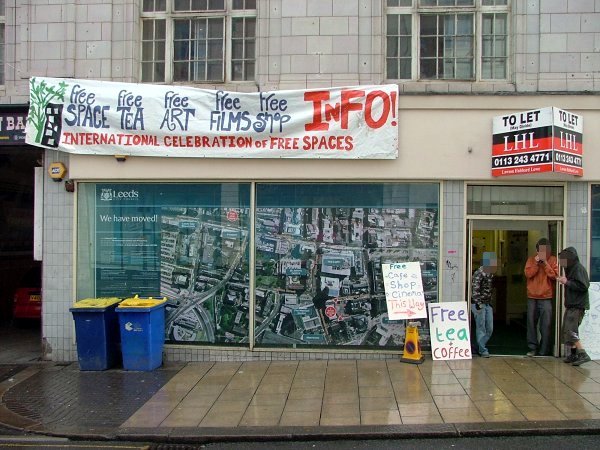 A big thank you to everyone who helped out or just popped in over the weekend!

The Audacious space was a great success in every way. Ironically while there are many people sleeping on the streets and while hundreds of people in desperate need of a home are forced to bid on just a handful of council houses every week Leeds City Council left their old housing advice office empty and unused. The building was occupied as part of the international weekend of action in celebration and defence of squats and autonomous free spaces. We put the formerly empty building to good use by providing free tea and coffee, delicious vegan food and skipped treats, a free shop, kids area, acoustic jamming sessions and loads of information. There was a free cinema screening radical films about relevant issues throughout the two days, ending in a packed out room watching the highly anticipated 'On The Verge'.

For the weekend the office opened up again and the public received decent housing advice: practical and legal information about squatting and information about empty properties in Leeds. This was very well received, especially by the large numbers of homeless people we had coming in. Through information displayed and leaflets handed out we raised awareness of important struggles such as the kirkgate market stalls facing displacement through a 90% increase in rent and the Little London community whose homes are under threat from a PFI scheme. This was linked in with worldwide land and housing struggles.

The roads of the city were also reclaimed as a Critical Mass took place on Saturday afternoon, the cyclists got a good response from the Audacious Space as they cycled past with their bike-trailer soundsystem. Throughout the city, thousands of copies of the MESHO (A spoof newspaper about squatting) were handed out to passers by.

The response from the public was amazing. Being in the very heart of the city, the place was constantly busy - everyone appreciated the free space, food and drinks and agreed strongly with what we were doing. The public gave us lots of support, donating bottles of squash, money and help with cooking and washing up. The space brought lots of people together and introduced many new people to squatting and creating free spaces. There is now an incredible amount of energy for future projects, and a more formal squatters network has been established.

As a result of this increase in energy for such projects, the amazing interest shown by the public and the stronger network we have now formed, we've decided to have an open meeting this Wednesday 16th. We welcome everyone who wants to be involved to contact us on 07526261061 after 4pm Wednesday.

Thanks again to everyone who made it what it was, please feel very welcome to come to the meeting and help make this sort of thing happen again.