Hundreds of people in London and groups across the UK held protests against the introduction of mandatory biofuel blending on April Biofools Day. A protest was held later outside Downing Street, with speakers from Colombia, Campaign against Climate Change, Friends of the Earth, Global Forest Coalition, GM Freeze and Biofuelwatch condemning the government’s decision to go ahead with their biofuel policy against overwhelming evidence of catastrophic impacts on climate, communities, biodiversity and food security. 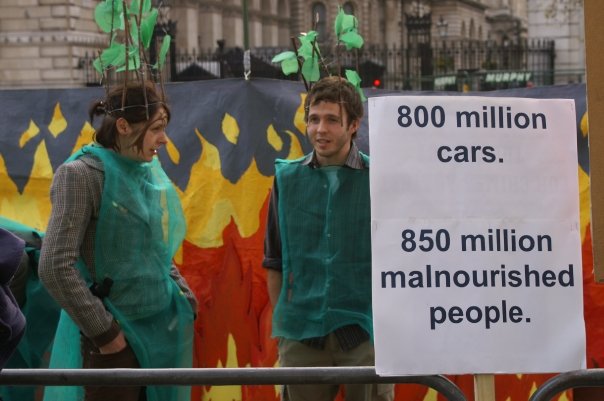 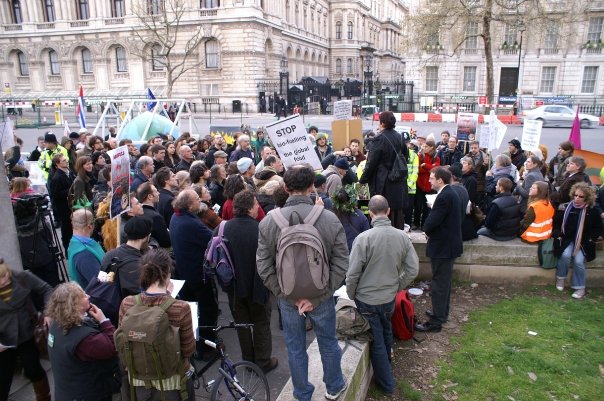 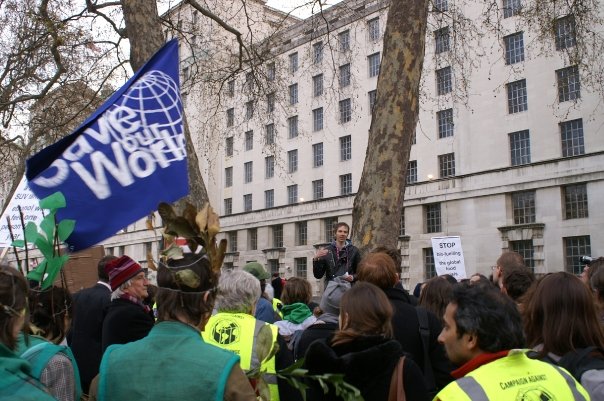 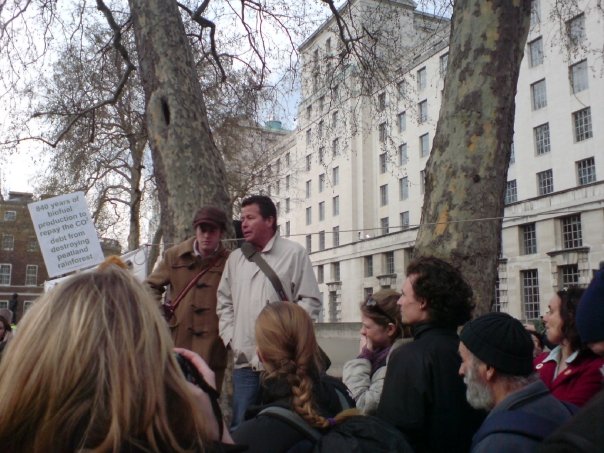 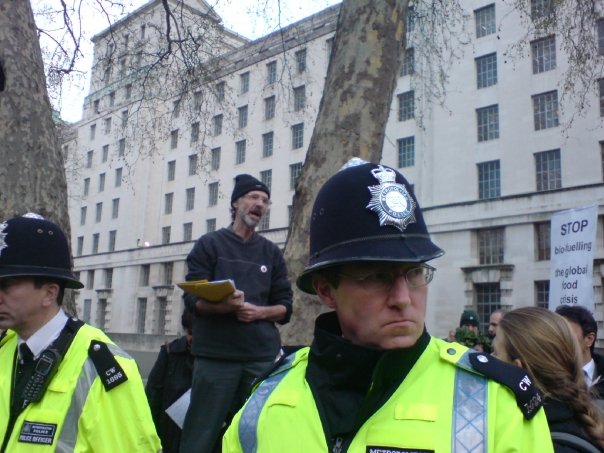 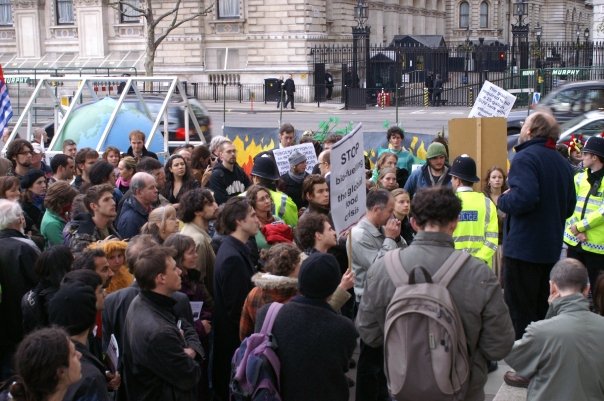 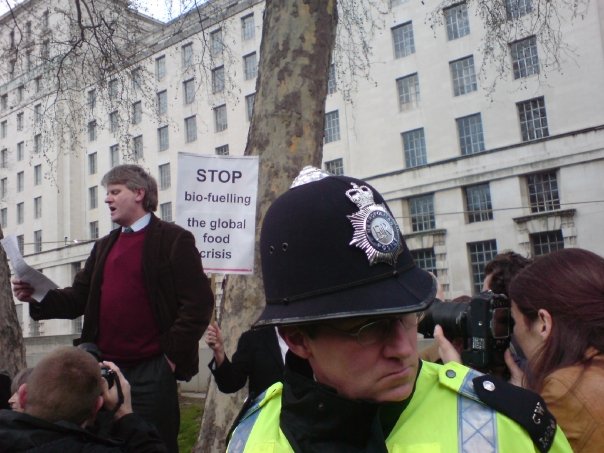 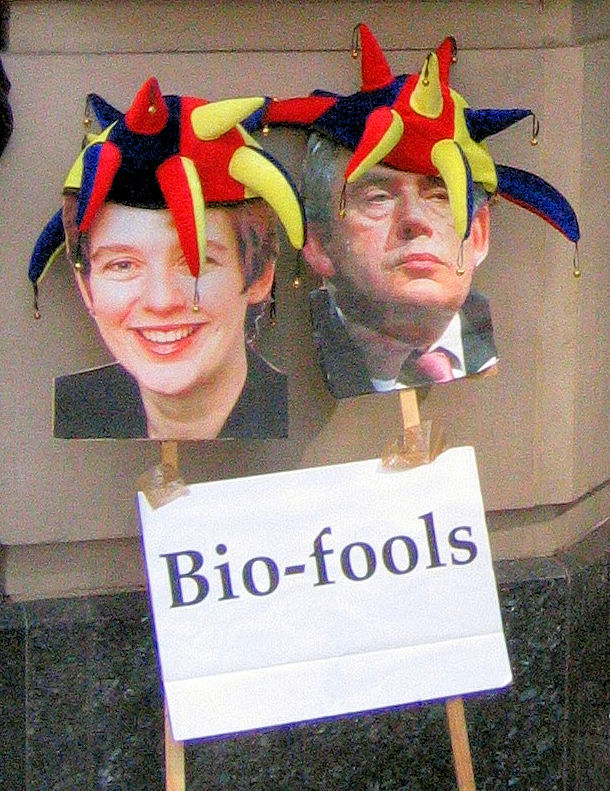 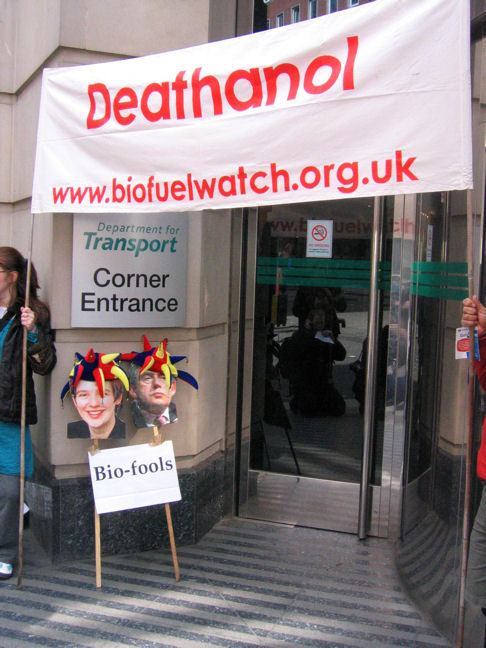 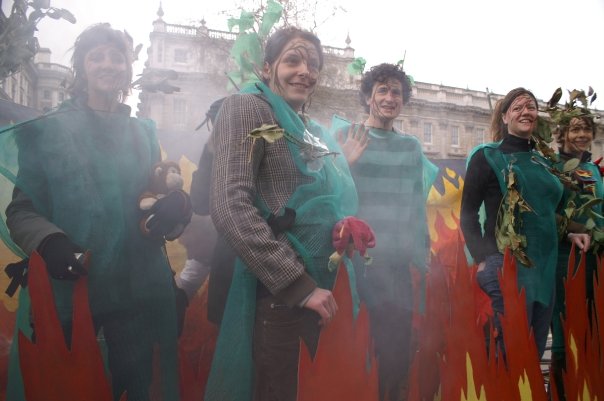 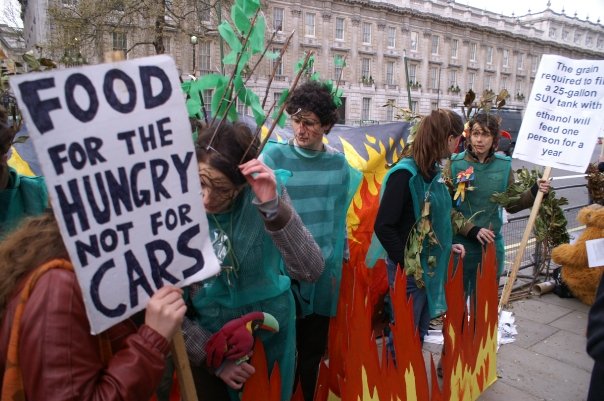 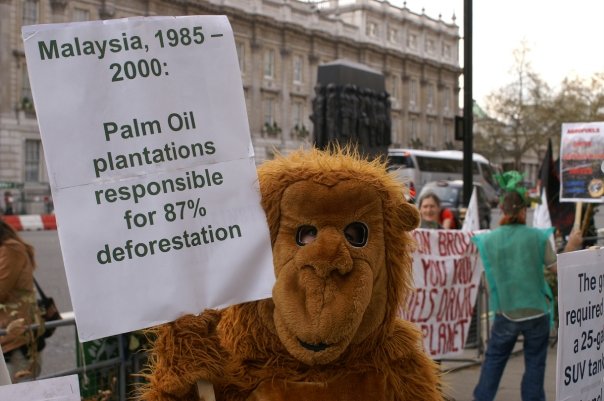 Photos from Downing Street protest below

Phil Thornhill of Campaign against Climate Change and Andrew Boswell of Biofuelwatch, in a joint statement, said “The RTFO or “Renewable Transport Fuel Obligation” will mandate 2.5% biofuels at British fuel pumps from April 15th, and thereby hugely increase UK consumption of biofuels. The government is demonstrating a perverse obstinacy in ploughing ahead with this despite the overwhelming scientific evidence that far from helping in the struggle to control climate change, biofuels will accelerate climate change, and are a major cause of an emerging global food crisis that is creating starvation and food riots in several countries.”

Play the Biofuel song on Global Food Crisis at:

A lunchtime protest was held outside the Department for Transport, Tuesday April 15th, April Biofools Day. Other protests were held outside the constituency offices of Ruth Kelly, Secretary of State for Transport, and Hilary Benn, Secretary of State for the Environment, and at BP and Tesco fuel stations. BP and Tesco are two of the companies with significant investment in biofuels from large-scale monocultures, and which have been strongly lobbying for mandatory biofuel blending.

"The UK has chosen to ignore a vast mountain of evidence that biofuels are contributing to hunger, climate change, deforestation and human rights abuses," said Dr. Rachel Smolker, main author of "The Real Cost of Agrofuels." She continued, "Perhaps they are counting on new technologies using cellulose from wood and grasses, but these won't sidestep the problems either. Whatever feedstocks are used will result in further expansion of industrial monocultures, possibly including Genetically Engineered trees. The bottom line is that there is a limited amount of land available, a large population to feed and a desperate need to preserve remaining biodiverse ecosystems. Instead of focusing on improving efficiency and reducing consumption, the UK is mandating further destruction."

Almuth Ernsting from Biofuelwatch adds: “Protests against the agrofuel industry and this government’s biofuel policies will not end today. The government is talking about vague ‘sustainability standards’, whilst agrofuels are causing ever greater harm to the climate, to forests and other ecosystems, to communities in the global South, to biodiversity worldwide, and to food sovereignty and food security. We need a moratorium on all agrofuel incentives and targets to prevent those catastrophic impacts.”

On 8th April, 29 UK and international groups wrote to the UK government, calling for an agrofuel moratorium and demanding a suspension of the Renewable Transport Fuel Obligation, and opposition to new EU biofuel targets – both the proposed 10% biofuel target in the Renewable Energy Directive, and the inclusion of biofuels in the draft new Fuel Quality Directive. Around 200 organisations from North and South have signed a call for an EU moratorium on agrofuels from large-scale monocultures, and there are separate calls for a US agrofuel moratorium and for an African agrofuel moratorium, as well as growing number of declarations from the Southern groups that are deeply concerned about the impacts which biofuel policies in Europe, including in the UK, are having on their communities, food sovereignty and environment.

1. For a copy of the joint NGO letter to the UK government, see:

2. For copies of the moratorium calls and the other declarations, see 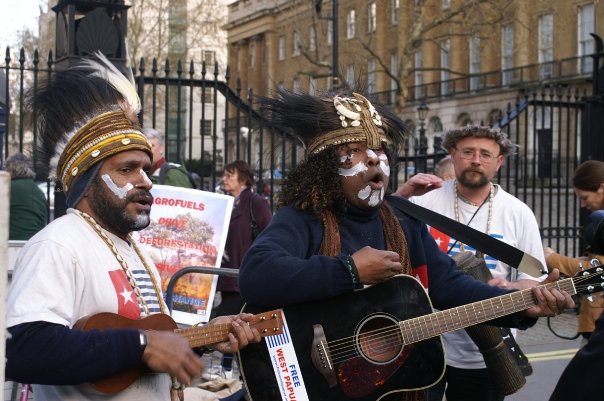 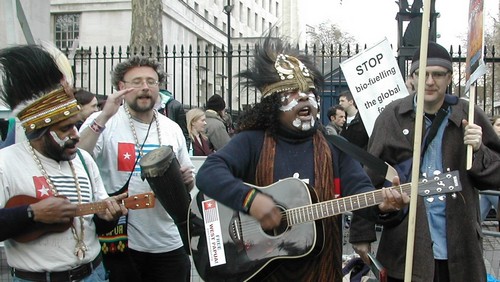 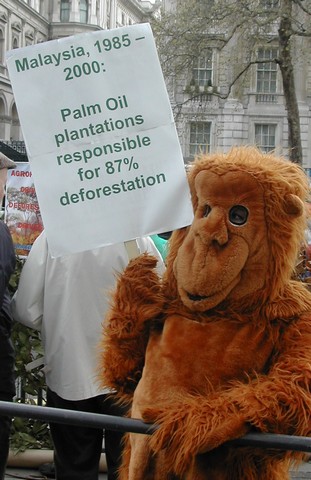 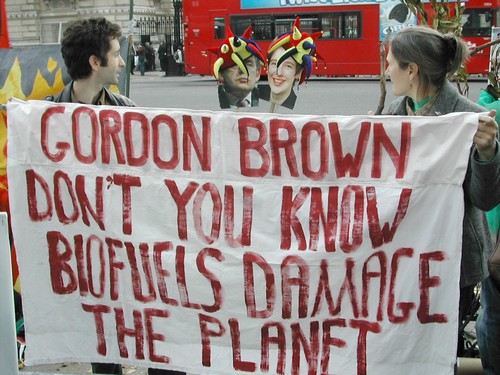 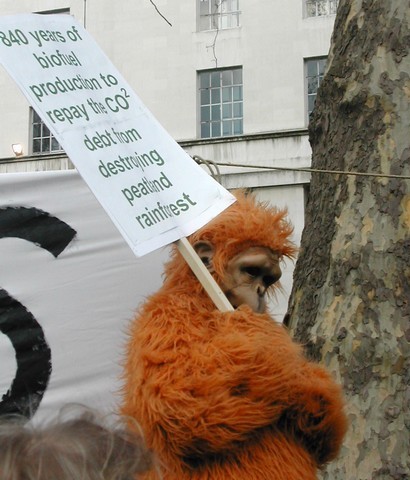 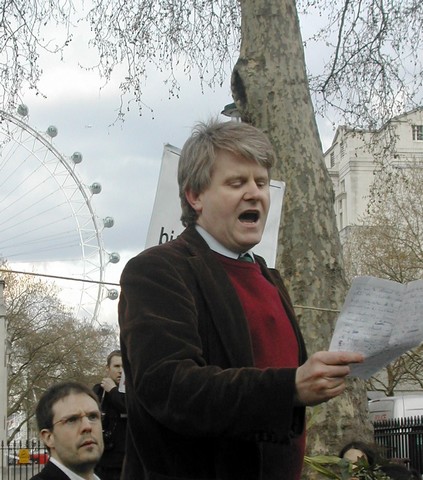 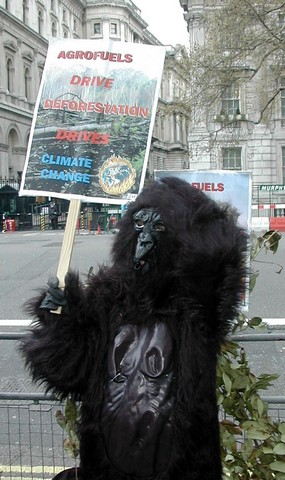 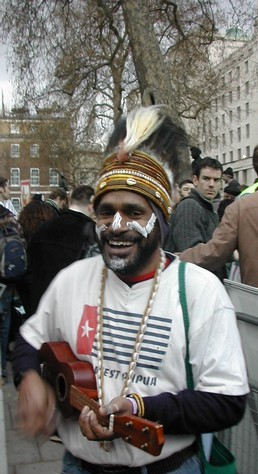 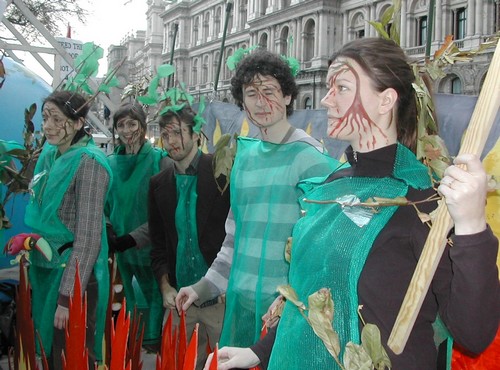 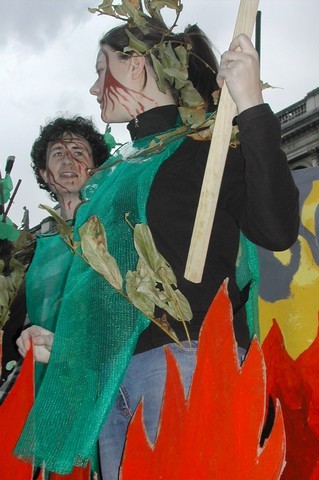 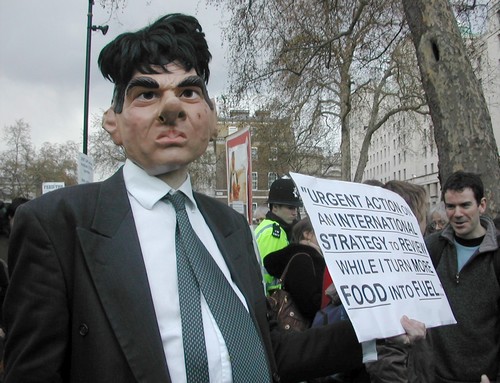 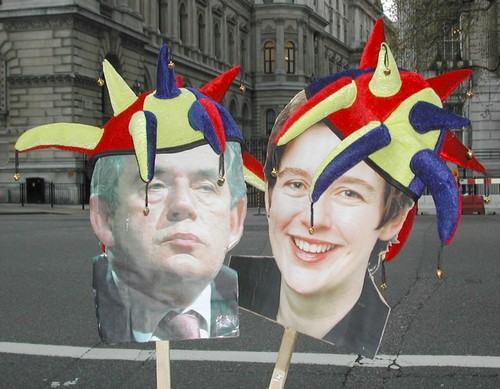