No Borders demo and mass action

Pictures and report by Manchester No Borders of the FREEDOM OF MOVEMENT and DEFEND AUTONOMOUS SPACES demonstration on Saturday, April 12th (see www.april-12.blogspot.com). 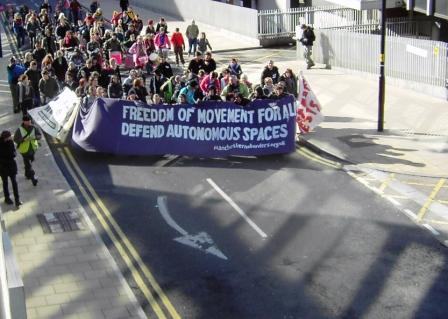 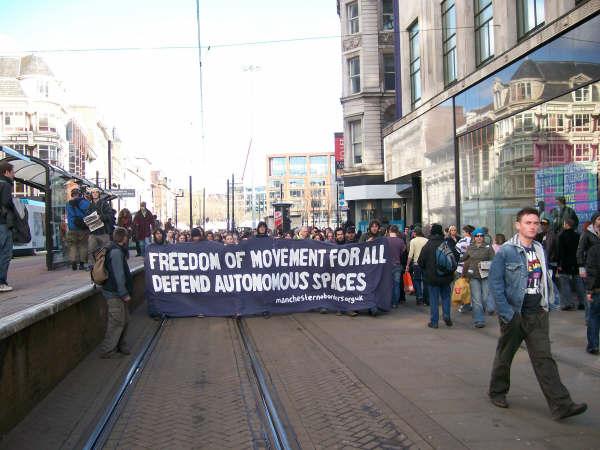 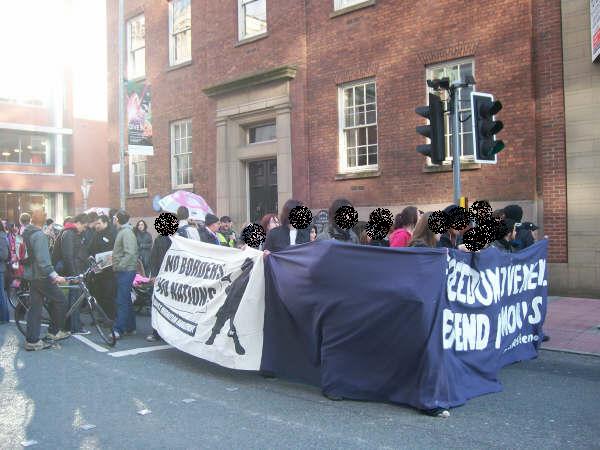 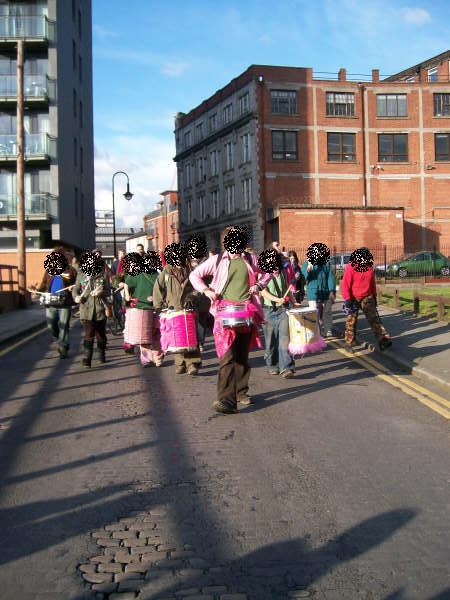 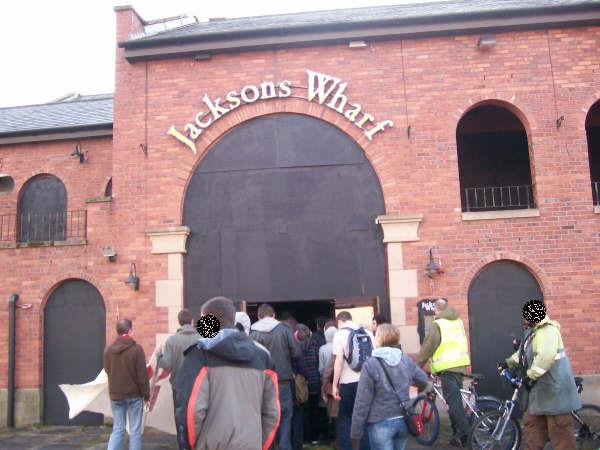 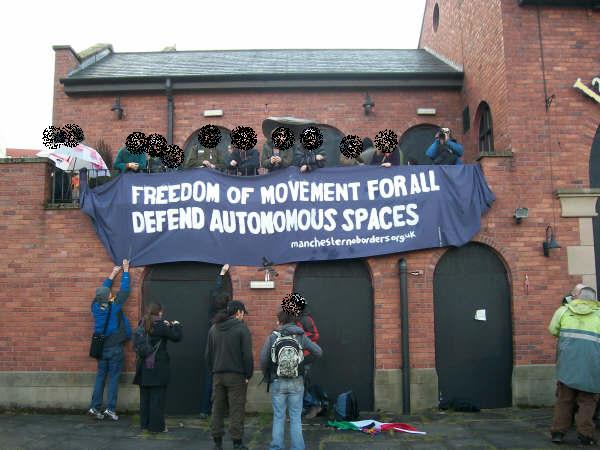 Last Saturday evening, up to 200 squatters and supporters followed our call for an unauthorised demonstration in the city centre. We were accompanied by a samba band (Rhythms of Resistance) and two soundsystems mounted on bike trailers. With the cops not bothering to show up, we marched undisturbed from Victoria Station into the Northern Quarter, along Market Street and Kings Street , through Spinningfields into Castlefields.

The demo in itself was already a great success! We carried three big banners reading ‘Freedom of Movement for all – defend autonomous spaces’, ‘No Borders, No Nations – against migration management’, and ‘Occupy – Resist’. There was a banner drop along the route, hundreds of spoof ‘Mesho’ newspapers were given out, and it was great to see a hundred people sprint down Kings Street past all the posh shops.

But as someone said, this was not just a demonstration. In Castlefields, we succeeded in collectively occupying Jackson 's Wharf, an old pub that was the focus of a successful local campaign against redevelopment. Up to a hundred squatters entered the abandoned building, hanging banners from its balcony and opening bottles of cava that No Borders had provided! Even the cops seemed happy to see an old pub being brought back to life for a couple of hours.

And let’s not forget that the events in Manchester coincided with dozens of building occupations, protests and street parties across Europe, in cities as diverse as London , Amsterdam , Vienna and Prague . Worldwide, tens of thousands attended.

Our actions have clearly shown the ridiculousness of having hundreds of houses stand empty, while social and community centres are being shut down and individuals face extortionate rents, mortgage repayments or eviction threats. With sky-high rents forcing the poor to the margins, the creeping privatisation of public space, and a council willing to close down vital community services and simultaneously sell off swathes of the city centre to luxury property developers and retailers, there has seldom been a time when fighting for autonomous spaces in Manchester has been more important.

We need to recognise borders where they appear. The restrictions created by capitalist social relations and the property system abolishes common ground, segregates according to wealth and ownership, and in doing so throws up borders all around us. Control of the movement and association of people - whether at the micro-level of our inner cities or the macro level of international migration is a global issue that must be challenged.

We should fight to create spaces in Manchester not simply as bases of resistance or celebration (though we hope they can provide this), but to encourage a departure from the systems that control us. For centuries, people have migrated across borders and have occupied spaces to live in as a way to take control of their own lives. They choose to leave their own pasts, in an effort to claim autonomy over their future lives.

The demonstration on Saturday was a celebration of this....Thank you to everyone who participated!