Streets A Beach - The Indymedia Story

Ever wondered just how indymedia started? or where it came from?

As part of a season of events exploring the political and cultural legacies of 1968, this free Monday Love Special at the Roxy Bar & Screen will present the history of indymedia,
from the hills of Chiapas to Reclaim The Streets, Genoa and the G8

with guest attendant and Master of Ceremonies, MC Lee Harris, footsoulja of '68

Live music, DJ's and anarchy till 1am 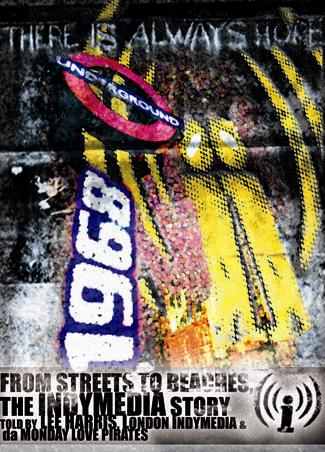 indymedia at Roxy Mon 5th May 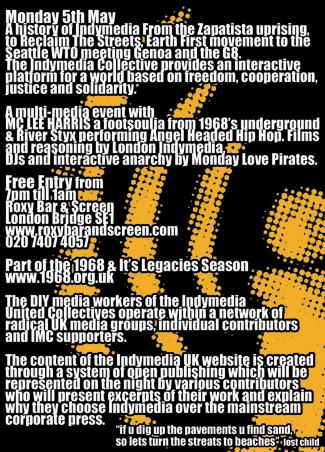 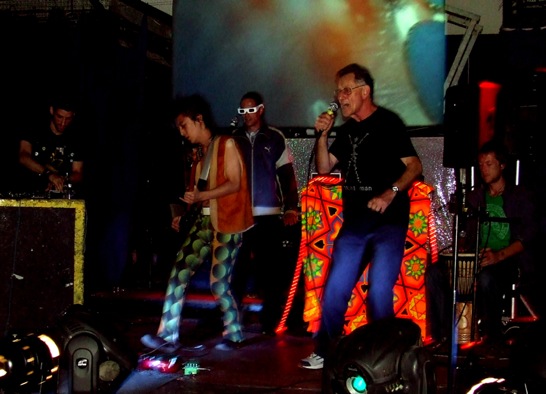 This multi media event at The Roxy Bar & Screen on Monday 5th May will be a fantastic opportunity to meet the volunteers of London Indymedia.
Many of the media activists who use the site today to campaign on subjects such as civil liberties, immigration and Climate Change, will be present to answer your questions.

This multi-media event will chart the rise and struggles of Indymedia from the foot hills of the Chiapas, to Reclaim The Streets, Mayday, the G8 and beyond.
Mixing music, audio, video and live presentations, the evening will inform and inspire
bringing to life the build up of movements through the anti-capitalists, the Zapatistas and Earth First
to the coming together of the peoples struggle in the late 90's, and the birth of Indymedia as a tool for reporting and organizing street protests.
With special contributions from the media activists who volunteer their time to bring you the news on social struggles from the UK and abroad.
Genoa, Gleneagles, Climate Camp, Seattle, Cancun, Oaxaco, No Borders, Palestine, Lebanon, Autonomous Spaces, G8..
come and say hello.

The evening will be introduced by MC Lee Harris the footsoldier of the underground in 1968,
with his prose and his poetry and his angel headed hip-hop partner RiverStyx, they will be master of ceremonies and give a very special live performance of 'Summer of 68' the song.

DJs and late night anarchy by the Monday Love Pirates

"if you dig up the pavements, you find sand, so lets turn the streets to beaches"