Protest. In memory of Ama Sumani.

Yesterday, on Saturday 19th April 2008, there was a protest in memory of Ama Sumani in Cardiff, Wales. Ama Sumani was taken by force from hospital in Wales in January 2008 and removed to Ghana. In Ghana she was unable to continue her treatment and died two months later. Friends of Ama Sumani do not want her death to be forgotten and intend to continue the struggle against the removal of people to countries where effective medical treatment for their conditions is unavailable.

The location of the protest was appropriately in front of the statue of Aneurin Bevan, founder of the NHS. The protest was called and supported by friends of Ama Sumani, no borders Wales, Swansea Campaign for Asylum Justice and others. The day was grey and very wet but uplifted by the voices of a Welsh choir who sang songs from around the world, including liberation songs from Southern Africa. The intersection of two ‘singing nations’ was poignant indeed.

Our politicians mask a failing economic system by lashing out at vulnerable groups, in the media, in policies and in laws in order to cultivate a public appearance of managing a situation with a ‘firm hand’, which they say is also ‘fair’. We the people need to investigate all their claims and make public the truths they bury under populist rhetoric that is playing to the basest of human behaviour.

Labour in government blames mass migration for strains on the NHS. The truth is that mass migration of professional health workers to the UK in the past 10 years alone has saved the government more than £1.92 billion in training costs and Ghana has lost 60% of their nurses, mostly to the UK.

We need to think bigger and more creatively than self-serving politicians, big business, mainstream media and all other institutions that prop up the corrupt power bases are capable of. The NHS is a treasure, valued especially by people who have lived with the ruthless barbarism of private health care, but it is under threat of privatisation. That must stop and privatisation needs to be reversed. Health care is a human right and that right has to be protected and extended to all. In a globalised world what we need, in fact, is an International Health Service.

A photo of the protest 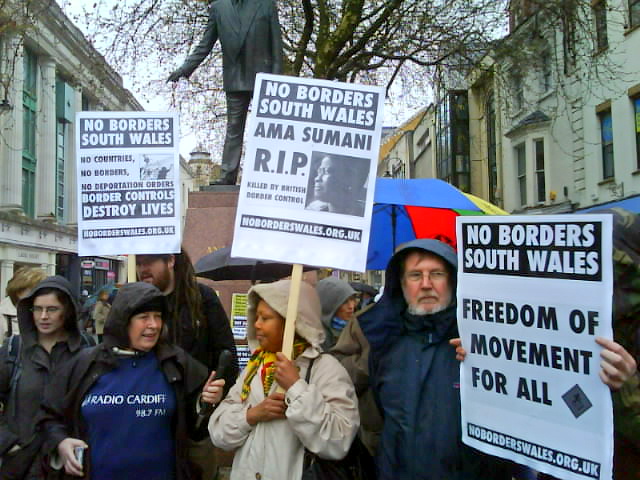 There was also coverage in the local mainstream media (Wales on Sunday):