Most pathetic NF demo EVER.

On Saturday the National Front held their annual St Georges day march in Eltham South East London. This ‘national mobilisation’ attracted a mere 22 nazis who were made to march on the pavement by the cops. The Police numbered around 100 (what a fantastic use of everyone’s taxes?) and shepherded the NF from one Eltham train station to another. The locals reacted to the spectacle with either indifference or amusement. Anyone who heckled the parade was surrounded by the bored cops who really did have nothing else to do as they outnumbered the boneheads they were babysitting by about 5-1. 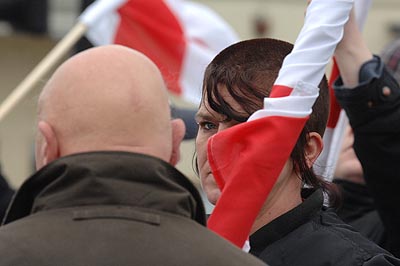 The master race gather in Eltham. 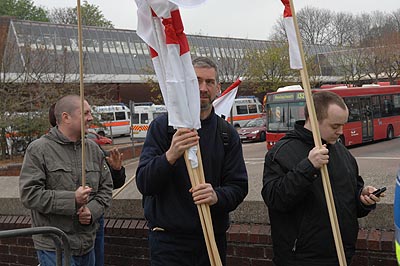 Just one problem. Theres not enough of them to hold all the flags. 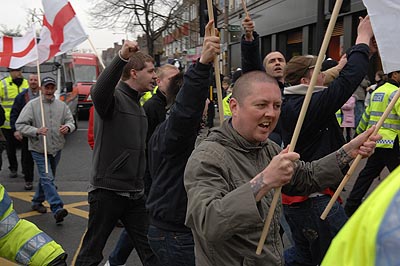 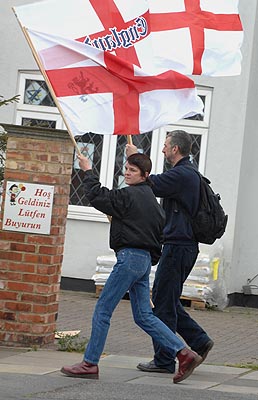 Reclaiming the pavement for the white race. 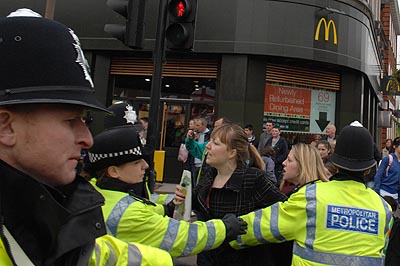 "Sorry madam its free speech for nazis only today" 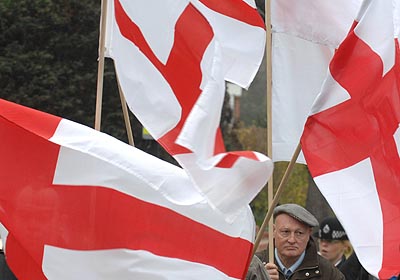 Out of his shell. NF deputy chairman Bernard Franklin. 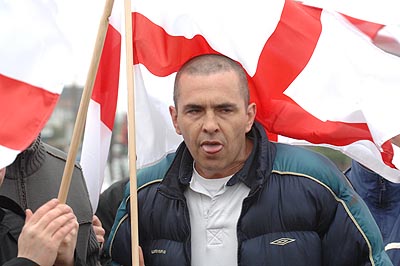 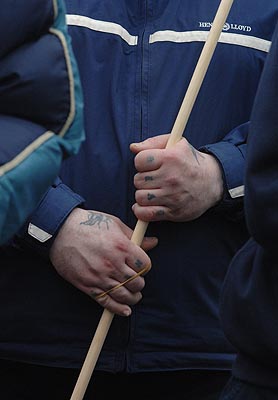 Knuckle tatoos read:'SKINHEAD'. In case he forgets how to spell it?

“What are all these pigs here for, haven’t they got anything better to do?” enquires an elderly local man. I reply that our heroes in blue are here to ensure that nothing unfortunate happens to the NF on their St Georges day demonstration. “National Front? National c*nts more like!” he retorts before heading off to find something else to moan about.

You have to wonder why the NF bother these days? Once upon a time they were the biggest and most well known far right party in Europe. Now the 22 losers assembling at Eltham station look more like they are on day release from a secure mental unit than a serious political party. You also have to wonder why St George is such an important annual event for them? One thing that most historians seem to agree on is that if St George did exist then he was almost certainly Turkish or Syrian, definitely not English. Perhaps somewhere in Damascus the smallest and most irrelevant grouping of Syrian nationalists is having a march in honour of King Alfred?

The demo itself is really sad. The chanting is so weak its barely audible and most of the demo is conducted in complete silence. I had never realized that Eltham was a hotbed of Irish Republican activity. At least that why I assume that they are yelling “No surrender to the IRA” down the high street? Either that or they have not read any papers or watched the news fore several years?

The rally at the end of the demo is equally devoid of any inspiration for the nationalist cause. First speaker is deranged bonehead Stuart Hollingdale who spends most of his ‘speech’ pleading with the 17 remaining marchers to bring a mate to the next activity. Well that would double their numbers to an enormous 34. Stuart you may remember has a special affinity with Eltham. A few years ago he heroically attacked the Stephen Lawrence memorial with a hammer in the dead of night. This courageous piece of direct action was caught on camera so he then found himself in jail, housed on the protected wing with all the most unpopular prisoners. Like the paedophiles for example.

The next and final speaker is NF deputy chairman Bernard Franklin. He mutters away like old Steptoe for around five minutes displaying slightly less charisma that my pet tortoise when it’s hibernating. The fact that he looks like a tortoise that has been ripped from its shell doesn’t really help matters.