Greenpeace folk dressed as Orang-utans have climbed all over Unilever's London HQ and Merseyside factory to tell the company to stop destroying rainforests for palm oil. Palm oil is used in products like Dove and Persil, and the companies Unilever buys from are destroying valuable rainforest and peatland areas - bad news not only for the millions of people who depend on them for their way of life and endangered species such as the orang-utan, but also for the global climate. 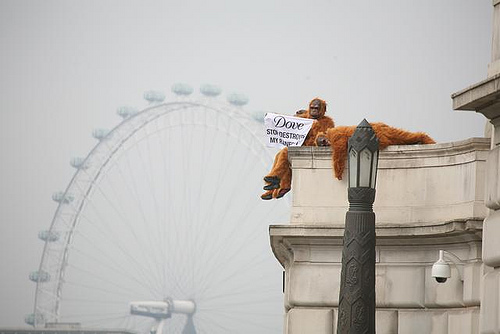 Greenpeace volunteers, dressed as orang-utans, are climbing over the London headquarters of the company behind Dove, which uses palm oil as one of its ingredients. Our latest research shows that Unilever, the makers of Dove, is buying palm oil from companies that are destroying valuable rainforest and peatland areas, which is bad news not only for the millions of people who depend on them for their way of life and endangered species such as the orang-utan, but also for the global climate.

Right now, four 'orang-utans' are perched on a balcony at Unilever's headquarters in London, telling passers-by why Dove is responsible for the devastation happening in South East Asia. Down below on the road, a giant billboard mounted on a truck parked below apes (sorry) Dove's Campaign for Real Beauty advertising campaign, and huge speakers are playing jungle noises at top volume. Meanwhile, at a Unilever factory at Port Sunlight near Liverpool, sixty volunteers (many in orang-utan cosutmes) have overrun the premises, decorating the front entrace with a huge banner. The factory makes Persil, which also contains palm oil.

Why Dove and Unilever? For a start, Unilever is one of the largest users of palm oil in the world, funnelling up to one in every 20 litres produced from Indonesia into some of the many well-known brands it owns. This one fact means Unilever has a huge influence on the way palm oil is made.

And being chair of the Roundtable on Sustainable Palm Oil (RSPO), Unilever has even more clout. The RSPO is a group of retailers, manufacturers and suppliers whose aim is create standards for the production of sustainable palm oil. But as things are, it's little more than a greenwashing operation because card-carrying members of the RSPO continue to be involved in the destruction of Indonesia's rainforests. The RSPO has developed a certification scheme, but as yet not a drop of certified oil is available, six years after the scheme was set up. Even when certified palm oil becomes available later this year, there is nothing to prevent certified palm oil being blended with non-certified palm oil. This will make it impossible for RSPO members to guarantee that their palm oil does not come from recently deforested areas. Just ask Unilever.

This was documented in the Cooking the Climate report we produced last November and Unilever featured prominently, but since then we've collected fresh evidence of Unilever's role in deforestation. Our latest report, How Unilever's Palm Oil Suppliers Are Burning Up Borneo, details how some of Unilever's key palm oil suppliers - Sinar Mas, Wilmar, Sime Darby and IOI among them - are devastating forest and peatland areas in Central Kalimantan. Not only are millions of people who live in or rely on the forests for their survival being put at risk, but as these areas are destroyed many endangered species are at even greater risk of extinction, including Sumatran tigers, Javan rhinoceroses and orang-utans.

There are also devastating consequences for the climate. As the forests and tropical peatlands of Indonesia are destroyed and converted into oil palm plantations, huge volumes of greenhouse gases are released, accelerating climate change. Indonesia is the third largest emitter of these gases in the world, in large part due to the destruction of its forests at the hands of the palm oil industry.

This is not great going for a company that paints itself as green and responsible: Unilever's website makes a great deal of its efforts to be both environmentally and socially responsible, but when it comes to palm oil the reality is very different.

We want Unilever to clean up its act, not just with the palm oil it uses in Dove but in all its products. To start the ball rolling, we've devised a three-point action plan for Unilever to follow:

1. support an immediate moratorium on the destruction of rainforest and peatland areas in Indonesia to grow palm oil;
2. stop trading with palm oil suppliers who are involved in this destruction;
3. pressure the RSPO to also support a moratorium.

Last year, we threw a spotlight on the environmental catastrophe unfolding in Indonesia; now we're at Unilever's doorstep, demanding that the company uses its power and influence to help bring the devastation to an end. That's why we're currently swinging around on various buildings up and down the country, but we also need your help.

Two years ago, we asked you to persuade McDonald's to stop buying soya grown in newly deforested areas of the Amazon, and it worked, so we'd like you to do the same with Unilever. Write to Patrick Cescau, group chief executive, and tell Unilever to clean up its act.

They also mutilate animals for the exact same products, not suprising to see they're doing this really! They get more and more scummy every day.