Activists from South Wales No Borders blockaded the Cardiff offices of the Border and Immigration Authority from 5am today. They prevented snatch squads from leaving the building, and held a picket outside. They sent out the following press release, which explains the demonstration... 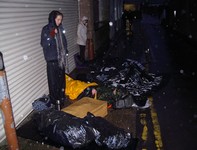 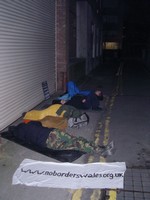 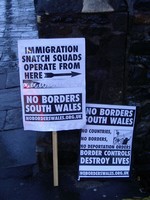 Protesters from the South Wales No Borders network are currently blockading Immigration Enforcement Officers at their base on Cardiff’s Newport Road, stopping vehicles from leaving the building’s car park. They were on their way to carry out dawn raids on Cardiff immigrants.

The demonstration is part of a nationwide day of action against repressive immigration policies. The protesters have been there since early this morning, and they have said that they will stay there until they can ensure that, for today at least, families in South Wales will be safe regardless of where they come from.

In response to the growing number of attacks on family homes by the Borders and Immigration Agency, the No Borders network have taken action in different cities across the country to expose and prevent the sinister tactic of “dawn raids” employed against families and young children. Dawn raids are used to gain custody of whole families in order to imprison them. Every day, doors are kicked in and families are snatched from their beds and taken to detention centres, where they are punished for seeking refuge in this country. They are taken away from their houses, jobs, schools and communities.

Immigration Enforcement Officers come in the middle of the night as children and their parents sleep in bed, and have not left to go to school or work. This also ensures no witnesses are present. There are no official stats on the number and regularity of these raids because the government will not release the figures. But the fleets of vehicles which have been blockaded this morning across the UK, as well as harrowing personal accounts from families, indicate large-scale capacity.

Bob Davies of the No Borders network in Cardiff said: “This is the agency responsible for removing the Ghanaian woman Ama Sumani from her hospital bed in Cardiff and forcing her to return to a country where she couldn't afford treatment & died. This is the agency that sends out snatch squads to perform dawn raids on unsuspecting families, and who launch attacks on innocent people to maintain Britain’s unjust border controls. It looks like a normal building, but these walls mask some really nasty injustices”.

Nia Smith, another activist explained: “we’re here to expose what the government is doing here in Cardiff and across the country – breaking down doors and snatching children from their beds in the middle of the night. Some children go to school, others go to prison. Immigration officers regularly target the vulnerable – families, children and the ill or traumatised – in order to boost their official figures of deportations. I think it’s sick”

Notes to editors
1. No Borders is an international coalition of groups who argue against immigration controls and in favour of freedom of movement is a basic human right (info:

http://noborderswales.wordpress.com/).
2. The Scottish Executive Cabinet has recently announced its total and fundamental opposition to dawn raids – to any kind of forcible removal of children – and to detention of children. This is something the Welsh Assembly could also do very easily, but they prefer to let this barbaric practice continue.
3. For updates on the blockades, to obtain photos of the event, or for an interview with a No Borders activist from Cardiff call:07513 900610
4. For information about the protests in other parts of the country call: 07807 503282