Demonstrations that started in Le Cayes on Thursday, April 3rd, against soaring food prices spread across Haiti to Petit-Goagve, Gonaïves, Aquin and, by April 7, to the capital, Port-au-Prince. Anger over rising prices has been building for many months with basic food stuffs increasingly out of reach for the poor. Tires were set ablaze in the streets and thrown together to form barricades that paralyzed traffic for days. 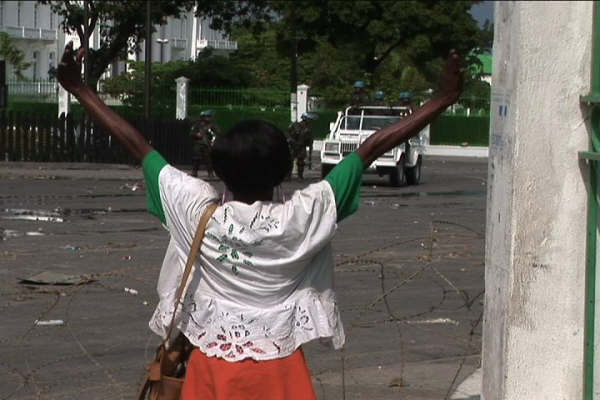 Numerous businesses were vandalized and looted, especially those selling food, as crowds vented their anger at the perceived indifference to their plight by the nation's elite, including the René Préval /Jacques Edouard Alexis administration. Broken glass on the streets near targeted buildings and cars became a common sight.

Hunger now termed "Klorox" and "Battery Acid" by Haiti's poor, likens hunger to a chemical acid eating away at empty stomachs. These new slang terms to describe the mounting hunger have come into usage over the last few months. Prime Minister Jacques Edouard Alexis resigned April 12, a move that was partly the work of sixteen senators who claimed they were responding to the huge demonstrations. Alexis appears to have sealed his fate by saying in a speech that many of the protesters were merely gangsters and drug dealers.

Some early reports in Haitian media outlets, owned by some of the small elite families in the country, also took this line, but it quickly became clear that the demonstrations were a massive outpouring of anger and that it would be unwise to dismiss as just criminal activity.

Alexis correctly pointed out that Haiti is not the only country in the world that has been hit hard by rising food prices. One Haitian media outlet, Agence Haitienne de Presse, in an editorial criticized the senators who helped remove Alexis, explaining that Alexis was used as a convenient scapegoat for deep seated problems.

The online alternative news outlet HIP (Haiti Information Project) noted that many of the senators opposed to Alexis were part of the elite political opposition to Haiti's former president Aristide, and that "...the censure of Alexis' government also signals the end of a tenuous political compromise between those who supported Aristide's ouster in 2004 and co-opted renegades of his Lavalas movement. Preval's Lespwa party base was built upon the Lavalas movement who saw him as a means to end repression following Aristide's ouster. Alexis' government was representative of a temporary truce between supporters of ousted president Jean-Bertrand Aristide and the opposition that worked with the international community to remove him from office."

They fear that with Alexis out a more reactionary replacement will further polarize political disputes between Haiti's rich and poor.

One woman interviewed, Jacqueline, a street vendor whose commercial activities are considered illegal by the state, explained her situation in buying power. She said that Haitians like herself typically earn 75 gourdes (roughly $2 USD) per day, but an individual serving of rice now costs upwards of 150 gourdes. Similarly an individual serving of corn or wheat is 135 gourdes, while a box of eggs has risen to 175 gourdes.

AT THE GATES OF THE NATIONAL PALACE

On April 7 large crowds demonstrated outside the National Palace, including men and women of all ages, demanding that the Prime Minister reduce the price of basic food stuffs. The national police alongside MINUSTAH (U.N. mission stationed in Haiti) dispersed the crowd. Some protesters pelted the troops and police with rocks, and a large palace gate was brought toppling down.

Police and soldiers tried in vain to put down the massive protests and protect private property that was being destroyed just blocks away from the palace.

MINUSTAH set up defensive ramparts around the National Palace. Undeterred, some demonstrators continued to throw stones that cracked loudly against the armor of UN personnel carriers.

In response, UN soldiers shot lachrymose bombs (gas to scatter the protesters) and fired guns at point blank range. Some deaths and many wounded were reported to have occurred in the melee.

Richardson, a demonstrator from Carrefour, said that he would rather be killed in the street by a MINUSTAH bullet than die passively of hunger in his house.

Some people shouted "We have our national police, we don't need MINUSTAH". Others stated that the powers behind the U.N. were part of the coup that ousted former President Jean Betrand Aristide in 2004.

Protestors said that their situation has deteriorated horrendously since the 2004 coup d'etat and that the former Aristide administration, even under a near total aid embargo, had placed subsidized food banks in Haiti's poorest slums. Among protestors widespread support was apparent for Fanmi Lavalas, the political movement led by the exiled president.

In March, before the latest "food protests", student activists appeared to have made some ground in reversing the ruinous policies that have decimated Haitian agriculture since 1986.

At the time, in a response to the student protesters Haiti's Minister of Agriculture, Francois Severin, said he would adopt eleven specific recommendations that the students had put forward to revive Haiti's agricultural sector. But in a recent address Severin said that now the government will not be able to implement those recommendations.

Under pressure from transnational financial institutions such as the IMF and World Bank, Haitian agriculture has been liberalized. Rural incomes and production has plummeted. Haiti's food supply has been made vulnerable to international price fluctuations as cheap, highly subsidized imports of rice and other staples put Haitian farmers out of work.

RELIEF FOR NOW, MORE PROBLEMS ON THE HORIZON

Debt relief for Haiti continues to be a subject for debate despite the country's predicament. The U.S. House of Representatives recently passed the Jubilee Act, a bill which guarantees debt relief and additional benefits of debt relief for 67 impoverished countries. The legislation now moves to the U.S. Senate, where this Thursday there will be a hearing on the Jub Act.

Dean Baker, co-founder of the Center of Economic and Policy Research (CEPR), based in Washington D.C., said that Haiti's short term problems with spiraling food prices result largely from US policy. "A big part of the story is biofuels. Land is being taken out of food production and used to grow crops for biofuels," he commented.

Despite being the most impoverished country in the Western Hemisphere, Haiti lags behind many countries in the Americas in obtaining debt relief through a program run by the International Monetary Fund (IMF) and the World Bank. A hard-hitting paper published in December by CEPR argues that the IMF and World Bank should disregard the rules of their HIPC (Heavily Indebted Poor Country) program: "Haiti's debt should be cancelled without further delay," said CEPR

By April 14, demonstrations had slowed but it is widely agreed that the problem of mounting food prices will continue to plague the island nation.

The Preval government appears to have realized it has no choice but to subsidize and negotiate price breaks for food for the poor, even though it has only put in place short term measures to offset the growing gap.

The government of Venezuela, viewed increasingly as a close friend and ally to Haiti, sent hundreds of tons in food stocks which were distributed in short order. U.N. Secretary-General Ban Ki-moon in recent days has also been vocal in calling for increased food aid to Haiti to avert a crisis; UNOPS is busy meanwhile increasing its distribution of donated food.