GREECE: Workers on the strawberry crops violently repressed by the land-owners

One of the first immigrants' strike in Greece, against the humiliating salaries and the bad living conditions. Police and authorities backing the land-owners 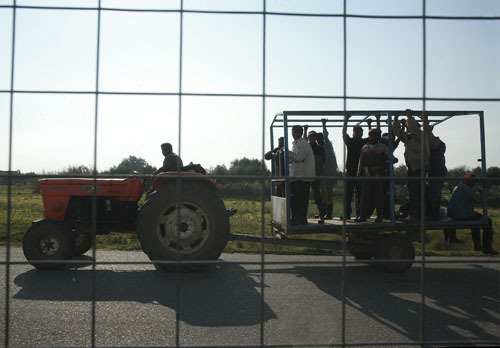 About two thousand immigrants, peasants in the strawberry crops of Manolada, Ilia, started a strike last week, as a reaction to the humiliating salary of 18 Euros per day. This strike, which is possibly one of the first immigrants' strikes in Greece, led to a confrontation which escalated on Saturday 19/4; the workers had organized an assembly to decide how they would settle their struggle. The same time, the local land-owners, armed with sticks and guns, attacked the workers and started beating people up, urging the immigrants to return to the strawberry crops.

As a result, 4 workers were taken to the hospital. Nevertheless, the assembly went on, as the peasants stayed in the square along with other workers, who arrived from other areas in solidarity. The pogrom of Saturday was concluded after the water supply in the immigrants' shacks was turned off; meanwhile, several TV journalists were attacked. The local land-owners of Iilia, act in co-ordination with the police, terrorizing the workers; about ten workers (most of them immigrants) were arrested.

As it was expected after the Saturday's outrageous incident, few immigrants participated in Sunday's mobilization. Since most workers had been back to the crops, it was decided to accept the proposal of 26 Euros per day, so as to address a victory. In the assembly, people shout slogans in Greek, Bulgarian and Bangla.

The peasants, most of them originating from Bulgaria and Bangladesh, are terribly victims, living in a status of absolute slavery. They work with no social and health insurance, having very low salaries and they are forced to move area, so that they offer their service to several local exploiters. Their bosses are fully tolerated and backed by the police and the local and national authorities. They quite often “forget” to pay, or pay up to 18 Euros per day, while they charge up to 120 Euros per month for the miserable shacks the immigrants live in. Photos :

The exploitation and repression of the immigrants is not only an issue in Ilia and other rural areas. 3 young people from Afghanistan were reportedly beaten up by policemen in Thessaloniki last Saturday, one of them is still detained. More than 150 solidarity immigrants in Athens commercial center, spontaneously joined a solidarity manifestation on Saturday, protesting about their problems. Meanwhile, some thousands of refugees live under terrible conditions, in a big camp in Patra (