On the Verge Tour in Wrexham next Friday

The 'On the Verge' film and speaking tour about the Smash EDO campaign will be in Wrexham next Friday 2nd May. 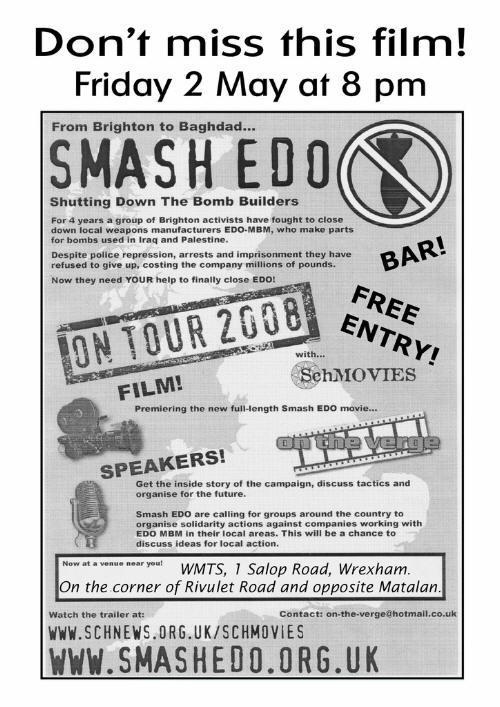 The film they tried to ban.

In 2004 a group of Brighton peace campaigners began to bang pots and pans outside their local arms manufacturers EDO MBM in disgust of their part in the Iraq war. This has grown into the Smash EDO campaign, which has cost the company millions, been the subject of large scale police operations and has tested the right to protest in the UK.

"We are residents of Brighton who marched against the war. We were sickened to learn that a company in our home town was not only profiting from, but making possible the illegal and immoral slaughter in Iraq. Smash EDO is a grassroots response to EDO's complicity in murderous crimes - a banner under which people opposed to those crimes can rally."

There has been active campaign against the presence of EDO MBM in Brighton since the outbreak of the Iraq war. Campaigners include - amongst others - students, Quakers, Palestine solidarity activists, anti-capitalists and academics.

GET YERSELF DOWN THERE!
BRING SOME FRIENDS!

If this event is successful, it is hoped that a new group will organise regular alternative free film nights in Wrexham.