Early in the ride police blocked the front at traffic lights and prevented movement, even when the lights were green. This is a familiar tactic which is done to compress the ride into as small a space as possible, with officers and a van at the back hassling stragglers to keep up, which slows things down and holds up traffic as well as making cycling difficult. 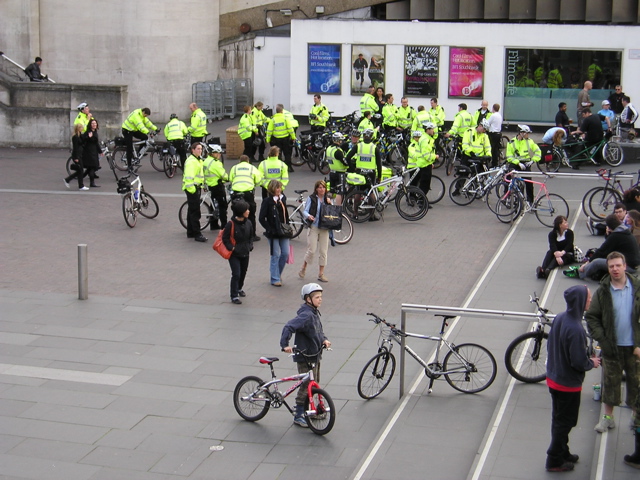 Police at start of ride. 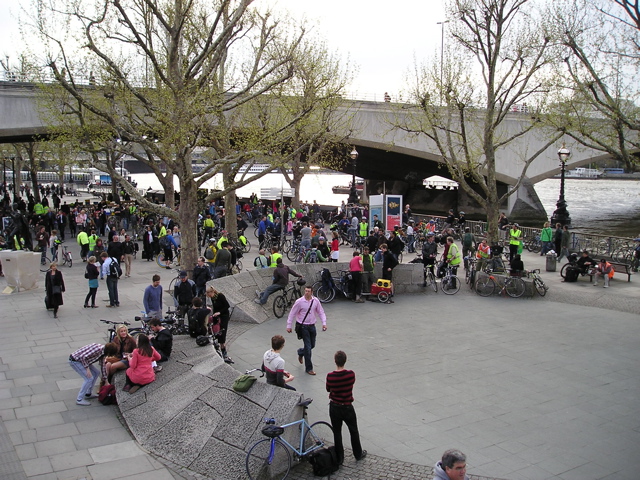 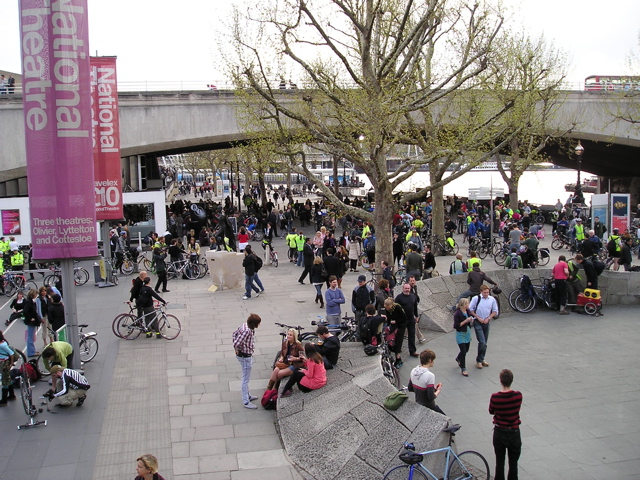 Several riders deep managed to completely encircled Parliament Square and perform at least three or four circuits before police put a stop to it and diverted the ride into Whitehall. Beyond Downing Street, and well out of earshot of Parliament, someone turned their cycle sound system on and was quickly made to turn it off again by one of the police who then attracted shouts and criticism from nearby riders. A short distance up the road it was defiantly turned on again before leaving the zone just before entering Trafalgar Square. Currently the law on sound systems within the SOCPA exclusion zone around Parliament is under review but this doesn't stop the cycle police trying to spoil the fun, despite there being no ban outside of the zone or on car sound systems within the zone. Throughout the ride several individual riders were picked on and argued with by the cycle police, who number 25+ on every ride, except the one in December which just happens to coincide with Christmas and New Year celebrations.

Police aside, the April ride was well attended and good fun but the usual commemorative anniversary t-shirts were sadly missed this time. Ironically, towards the end of the ride it was held up for a while in Shaftesbury Avenue by the usual Friday evening motorised traffic congestion. Critical Mass is often blamed for holding up traffic but they are not the only ones doing so on entertainment evening outings, nevertheless they are much more stringently policed.

1. The police did not divert the mass down Whitehall. Cyclists did - I can tell because I was one of those who started going down Whitehall, and everyone followed.

2. The police had no control over the mass. There was constantly 20 people in front of the police line, at times going through red lights, blocking traffic ourselves, etc. This was the most empowering mass I'd been at for a while.

3. You have to look at the police tactic : They will make a line of cyclists to try and slow down and contain the mass. However, in most cases, it's very easy to go through that line - just cycle through them, overtake them by going on wrong side of the road, etc. As long as there's enough people pushing through (as was the case this Friday), they can't do anything about it. The problem is that some people will not go through that line ; they stop behind the police, and in turn block the people who are behind them. The police can cope with having 20 people in front of them, because they are holding up the rest of the mass (thanks to the first line of people who didn't try to overtake them) and so those 20 people are forced to wait (or split and do their own mass!)