What the cops did in Cardiff yesterday

Yesterday there was a seriously over-policed peaceful demo in Cardiff against the huge new PFI that will bring a 'School of the Americas' style military academy run by arms dealers and the Open University to St Athan. Here are a few pictures of the cops, whose services were provided at huge expense to the taxpaying public, with a special focus on the evidence gathering team. 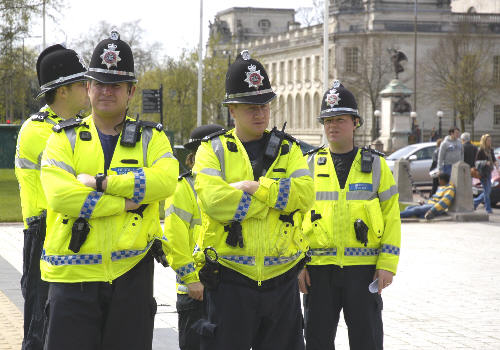 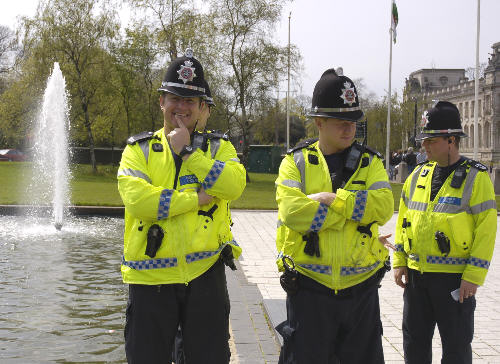 Contemplating taking a dip to cool off 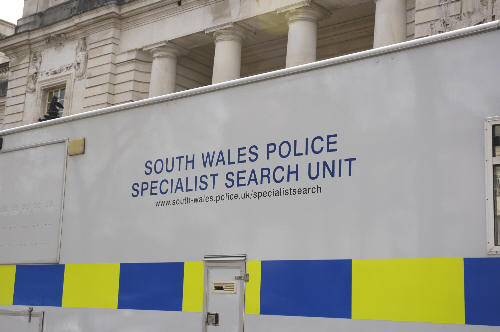 Got an unsightly demo on your doorstep? 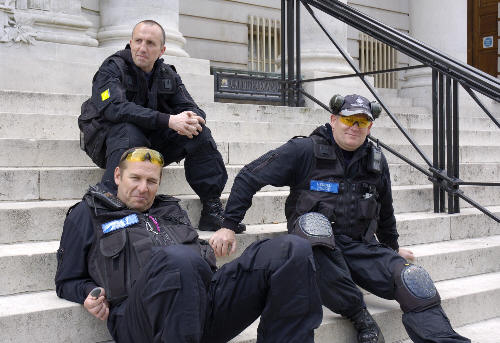 We specialise in "protest removal" 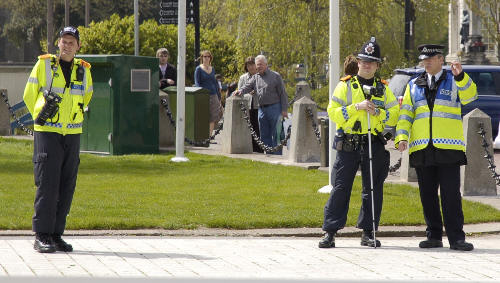 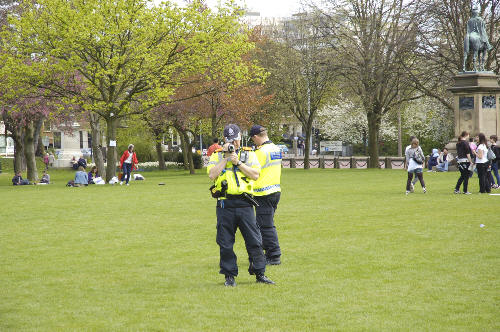 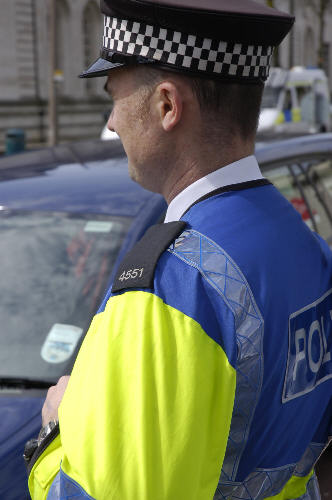 And a lone police photographer 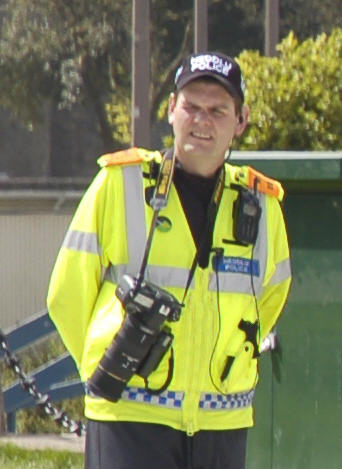 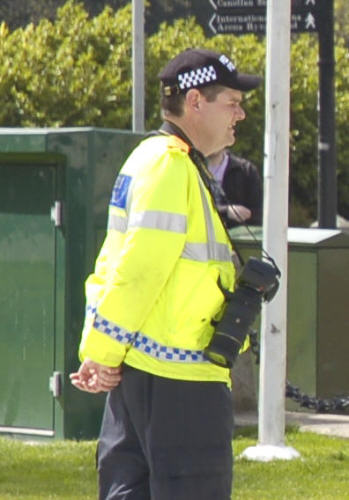 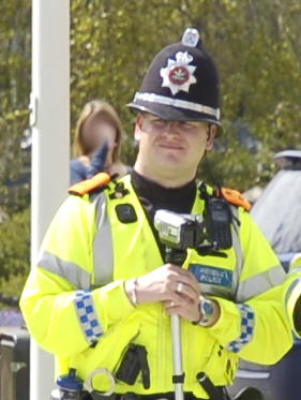 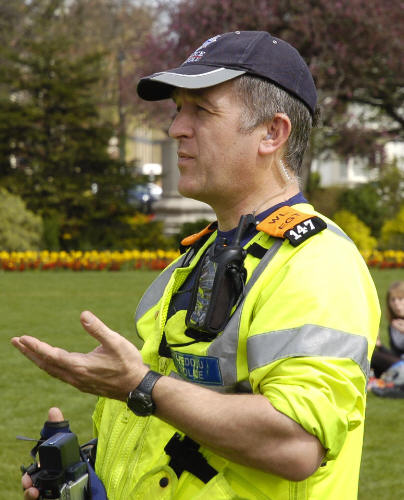 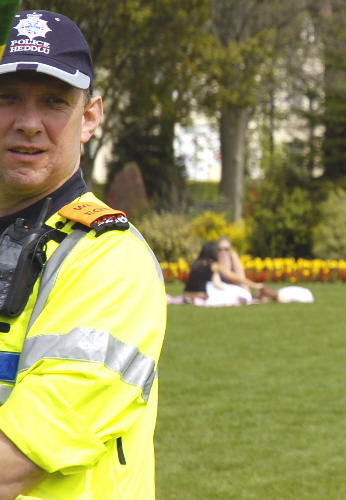 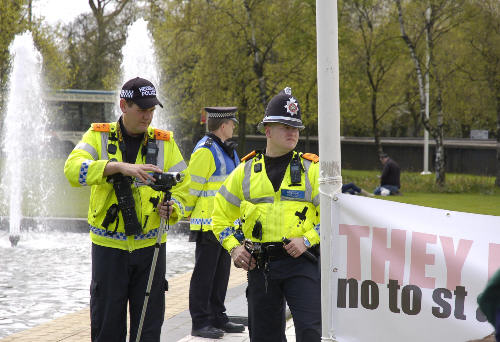 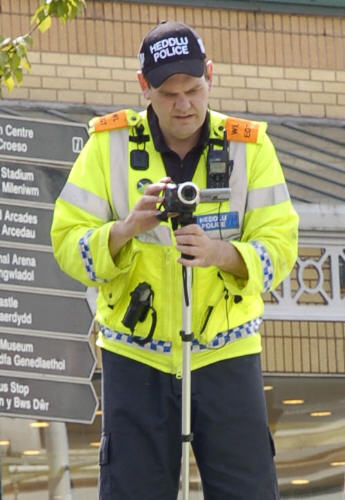 Just how much evidence do they need?

Dunno if there are any fitwatchers in Wales, but they were sorely needed yesterday. Something to think about before the next St Athan demo maybe.

In pic three the cop on the far right with the blue bib is Met FIT officer Ian Skivens, long way from home Ian? 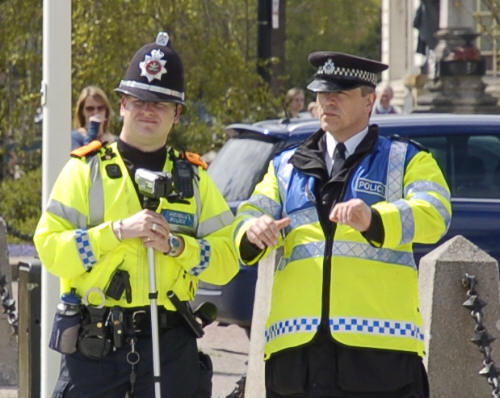 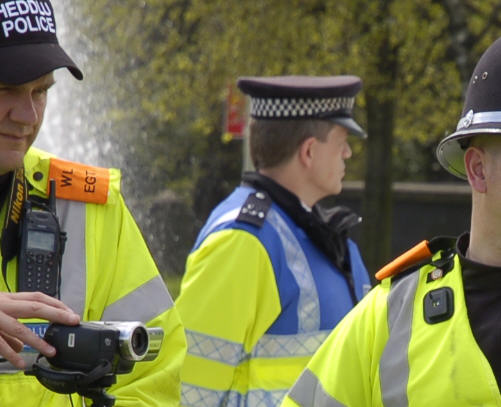 Ah, I wondered whether the Met might have been involved.

Here are a couple of pics at closer range.

Hey Mr Plod - just what were you gathering 'evidence' of? Was there any 'unlawful activity' taking place? No? Well there rarely is when you go and film people going about their lawful democratic right to protest is there? Ask yourself what you are doing this for and who gives your orders. (Just doing my job! Duuuh!)

Well, see link below for police pay scales, then you can work out the cost to the taxpayers of policing peaceful protests and use it to draw the attention of the public who are paying for mobof cops. You might even want to write to your local Chief Constable and local police authority asking how this waste of public money is justified.

eg Constable 3 years service £26,331 per annum divided by 50 (weeks) divided by 40 hours is around £13 an hour.
And that's without the hours of 'briefings' cost of transport, equipment and police staff hours of watching and collating all the hours of video photographs etc, of people going about their lawful democratic right to protest.

Under The Data Protection Act 1998, you have a right to ask the cop taking your picture his/her name and number and where s/he is based so that you can apply to get a copy. Do it and see how shy they become when approached.

Every Camera Plod I have asked about why they are doing it, what happens to the pictures video etc pleads ignorance. The say they don't know and are not interested in the results of all their painstaking work or are too shy to admit what they know about Secret Police work.