Report from the march in Cardiff yesterday against the proposed military academy at St Athan. 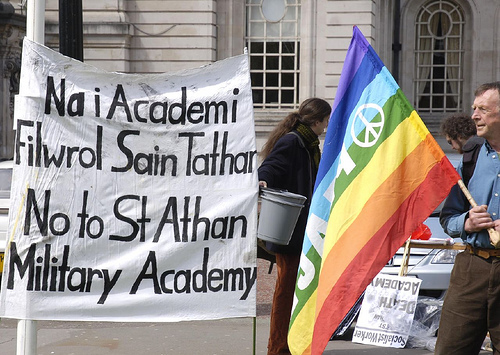 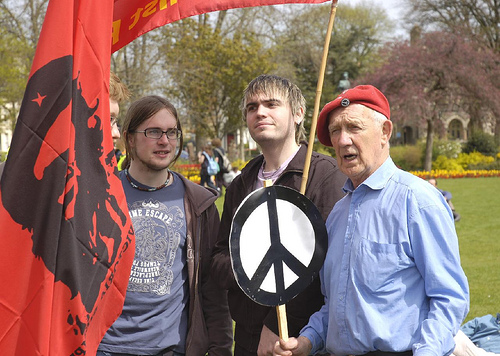 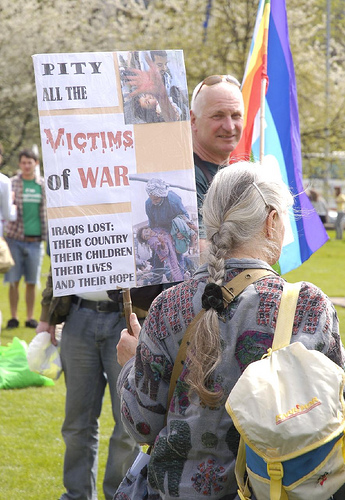 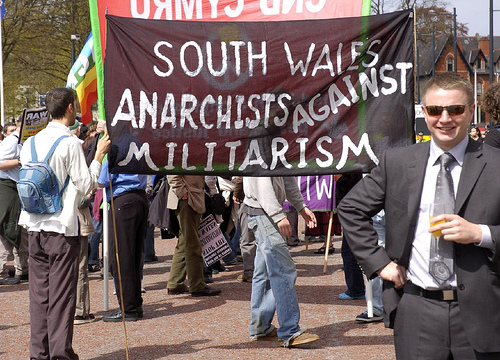 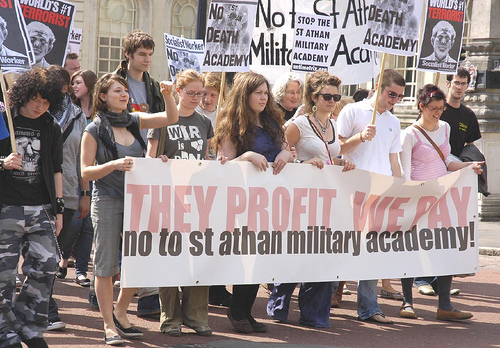 The march sets off 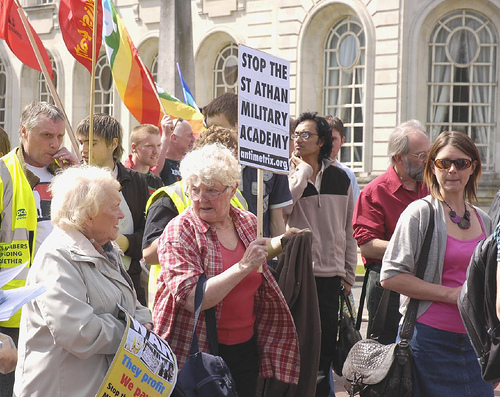 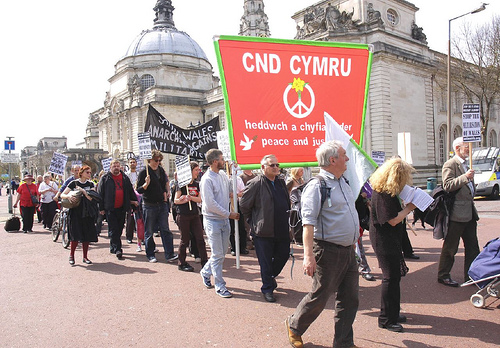 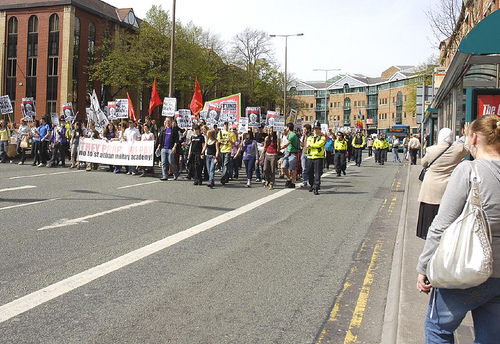 A few people at the bus stops 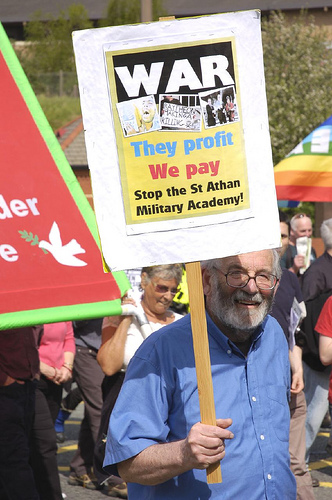 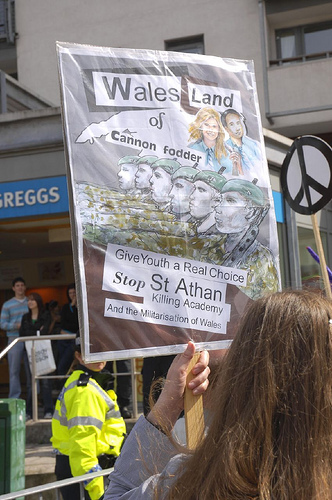 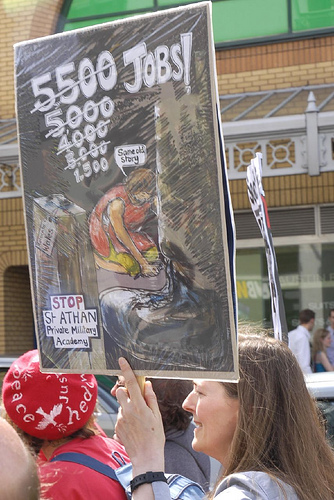 Exactly how many jobs are being created? 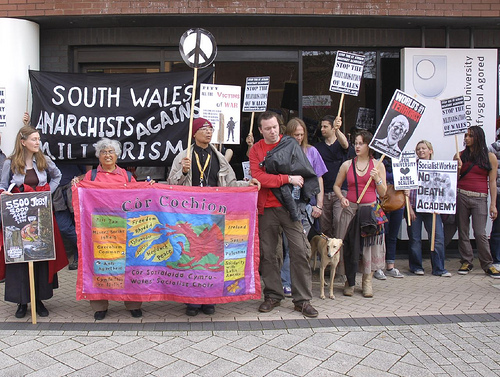 At the OU in Cardiff 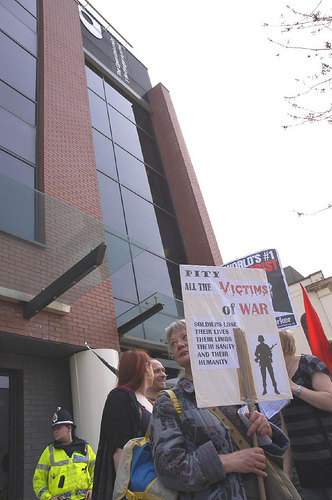 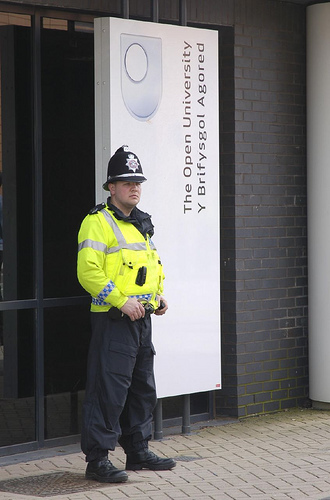 The OU gets police protection 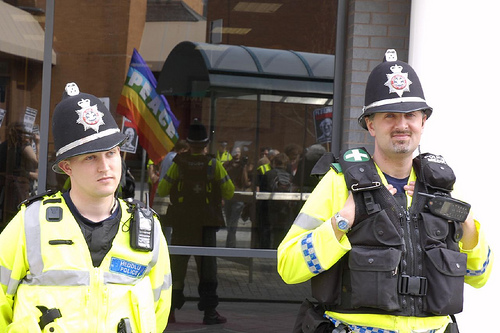 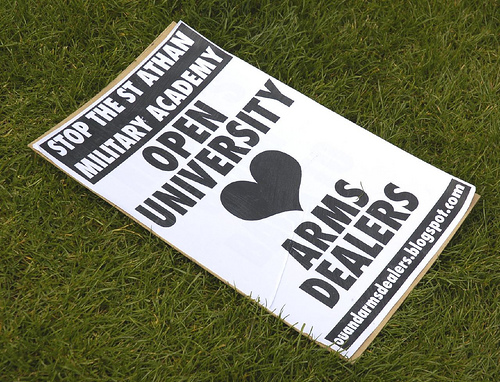 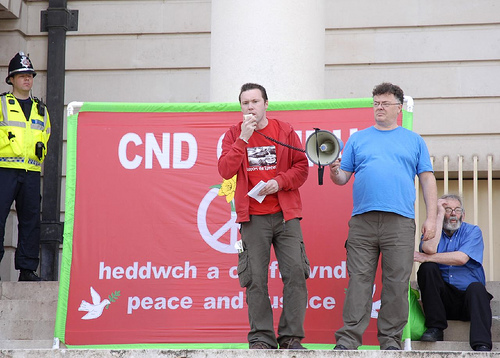 The sun shone on Cardiff yesterday for the march against St Athan military academy. A couple of hundred people turned up to be marched along a desolate route dictated by the police to the Open University offices in Cardiff and then back along the same empty roads. A ridiculous set of restrictions was put in place under a Section 12 (Public Order Act, 1986) notice. We should all be aware that restrictions like these may be placed on all demonstrations - not just marches and processions - if the government gets its way over 'harmonising' [extending] the laws which already infringe our right to protest. They're hoping we'll be too busy celebrating the demise of SOCPA to notice.

St Athan is the latest bright idea in the government's 'War on Terror'. In the biggest PFI scheme yet, using billions of pounds of taxpayers' money, an unholy alliance is being forged between the Open University and a bunch of arms dealers including Raytheon and Qinetic to create a consortium which will be training armed forces from across the world in subjects such as 'peacekeeping'! Anyone notice just the tiniest conflict of interest there? How are arms dealers going to make their profits if the people they get paid to train go on to spread peace in the world?

It was interesting to see a couple of Plaid Cymru politicians at the demo. Jill Evans, MEP, is the only high-profile Plaid politician to speak out against St Athan, and that only came very, very late and after she was repeatedly asked to state her position. She is also Chair of CND Cymru, a position which would have been totally untenable for someone supporting the deal, and as an MEP she's a little removed from the cosy Plaid/Labour partnership in the Welsh Assembly Government so perhaps finds it easier to speak out than others. Leanne Wood, AM, was also there, a little surprising given that a few months ago she was writing to people to say that she had better things to do than get involved in a pointless campaign over an already done deal. Still, people can change their minds, or - perhaps more likely - realise that St Athan isn't set to be the vote-winner the politicians imagined.

Good to hear Davy McAuley, one of the Raytheon 9, speak at the rally after the march and call for direct action against the arms dealers.