The next Day of Action for Free Assembly will be held this Saturday 3rd of May. We will gather at 1pm at the ‘Charles I Island’, the roundabout on the South side of Trafalgar Square (fyi: this place is just on the border with the SOCPA exclusion zone). Come with your mates and decide with them what you want to do with the day. Bring placards, banners and anything else you can think of. Let them know you won’t be easily silenced. 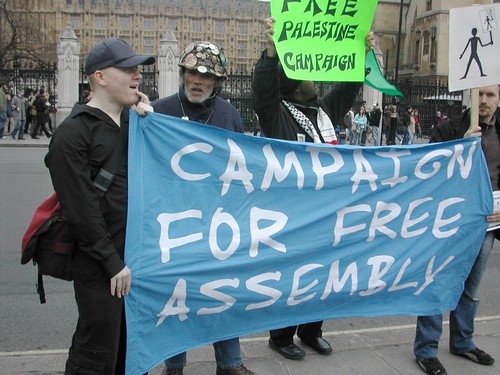 The Government has just published a white paper on 'The Governance of Britain'. In this paper they propose the repeal of the Serious Organised Crime and Police Act (SOCPA) 2005, sections 132-138, which restrict demonstrations in a 1km zone around Parliament. However, the need for new laws was hidden in the small print, where they ask MPs to come up with new ways to thwart demonstrations around Parliament. As a result, the House of Commons has created a Joint Committee on Human Rights ‘to inquire into the human rights issues arising from policing and protest’. The Joint Committee has launched a 'call for evidence' and these are some of the questions they ask:

• What limits, if any, should be placed on the right to protest and why?

• Should specific limitations be placed on the ability of certain groups to protest? If so, who and why?

• Should the right to protest be more strictly curtailed in relation to certain geographical areas? If yes, where, why and what limits would be acceptable?

• In what circumstances would it be permissible for the State to take pre-emptive action, which curtailed protests?

• Are existing police powers necessary? Are more or fewer required?

• Are counter-terrorism powers appropriately used in the policing of protests?

• In what circumstances may actions during protests be justifiably criminalised?

• How should the balance be struck between the rights of protesters and other competing interests (such as the rights of others or the prevention of disorder or crime)? Would legislative changes be desirable to strike a better balance between competing rights, or is the current legislative framework about right?

This seems to be the first step in the introduction of more legislation that will further restrict our freedom to assemble and protest. We need to respond not on paper but on our streets. Our message is simple: we claim the freedom to assemble without prior notification or permission and this freedom is not open to negotiation.