The Tumbledown Dick, an old pub, an old coaching inn in Farnborough, faces an uncertain future as it has closed down and been boarded up. 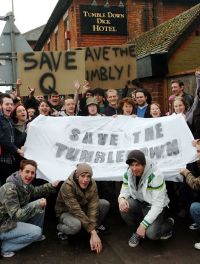 protest rally to save Tumbledown Dick

'We are still exploring options for the site so unfortunately at this stage we have no further news on when the pub will reopen.' -- Punch Taverns

'For all it was, it did provide a good place for young people and up-and-coming bands to go. We are firmly behind the retention of a music venue at the Tumbledown Dick.' -- Phil Bryant, Farnborough Society

'In a town devoid of cultural stimulation or an outlet of creativity would it not be foolish to lose a venue so ideally positioned and capable of sustaining such growth?' -- Rosemary Whittaker, Save The Tumbledown Venue

Recently the Farnborough Society asked for nominations for the worst and best of Farnborough.

The town centre was bought by KPI (a Kuwaiti-financed front-company of St Modwen) ten years ago. With the connivance of the local council, the Rotten Borough of Rushmoor, KPI/St Modwen has laid waste to the town centre. Now there is little left but boarded-up shops and an unsafe derelict demolition site, dating from when half the town centre was demolished last summer.

Finding the best was a far more difficult task as there is little of note in Farnborough.

The Deli in North Camp was one possibility.

North Camp is what was the original shopping centre of Farnborough, that had its heyday when Queen Victoria was on the throne. The Deli is a food shop, lovingly restored to its Victorian splendor. Everyone who visits the shop for the first time, not only expresses their pleasure at finding a shop that sells real food, but also comments on the shop itself.

The other possibility was the Tumbledown Dick (also spelt Tumble Down Dick), an old coaching inn that predates Farnborough, when a coaching route ran over the heathland, a route now no more than a track.

The Tumbledown Dick is a rare example of a pub retaining its original name. Two possibilities: either a reference to the highwayman Dick Turpin or the fall from grace of Richard Cromwell, the son of Oliver Cromwell.

A very sleazy pub, but the one thing it did not lack was character. There is little of which that can be said of Farnborough.

The Tumbledown Dick was a live music venue. Indeed the only live anything in Farnborough.

Only last week a friend and I was wandering through Farnborough early Friday evening. All we wanted was a coffee. There was nothing. Nowhere was open. Not that we would have fared any better during the day, not unless we wished to go into a junk food eatery. Even a Starbucks would have been welcome!

And contrary to the town centre developer passing off, using the Starbucks brand name and corporate logo and colours on their hoardings in a crude attempt to enhance their own reputation and deceive the public, there is no Starbucks coming to Farnborough.

We ended up in the local sports centre. Horrible coffee, horrible environment, with noise ricocheting off the hard surfaces. I came away with a bad headache.

For many weeks now, the Tumbledown Dick has been boarded up.

Whether deserved or not, the Tumbledown Dick has always had a reputation for drug dealing, therefore it was quite natural for rumours to circulate that it was closed by a drugs raid.

It has actually been closed by the Environmental Health Department of the Rotten Borough of Rushmoor, following a complaint from a member of the public.

There was problems in the kitchen, problems with asbestos.

In the last few weeks, there has been a scandal of demolition of garages with asbestos roofs, to which the council chose to turn a blind eye.

Garages at Firgrove Court, which ironically lie at the back of the Tumbledown Dick.

To be strictly correct, Punch Taverns, owners of the Tumbledown Dick, voluntarily closed the pub, raising fears there may be a hidden agenda, either to demolish the pub in order to develop the site or create yet another trendy yuppie eatery.

The office block next door to the Tumbledown Dick has lain empty for years, Firgrove Court that lies behind is earmarked for demolition for a car park for the superstore that may or may not get built on the large town centre derelict demolition site.

Redevelopment of the entire area is therefore a very real possibility. A redevelopment the Rotten Borough of Rushmoor would rubber-stamp as it has done with every other bad scheme from big developers.

A support group has been formed to fight for the Tumbledown Dick to be saved as a pub and live music venue. They have launched an on-line petition.

They have also made information available on-line, unfortunately they have foolishly placed this on Facebook, which cannot be accessed unless you are a member of Facebook.

Facebook sells data on its members, so it is hoped the support group have the good sense to shut down Facebook, and host their information elsewhere.

The Tumbledown Dick is ideal for hosting meetings, showing films. Maybe, if they ever reopen, they should have film nights, with an inaugural night showing the film they tried to ban, On the Verge!

Several years ago, I think 2000, when Rising Tide did a tour on Global Warming and Climate Change, they visited Farnborough (because of the expanding business airport at Farnborough Airport), they made use of the Tumbledown Dick.

If it remains closed, it has the potential to become another rampArt!

Only a few minutes walk from Farnborough Station, 30 minutes by fast train to central London.

Past acts to have performed at the Tumbledown Dick include The Jam.

There is no reason why the Tumbledown Dick cannot serve good food from locally sourced ingredients, good beer (something it has hitherto lacked), afternoon teas and coffee and be a live music venue if not a cultural centre, a resource for all the community.

The staff have been made redundant, which indicates the pub is not going to open any time real soon.

More on the background:

If it is to be retained as a music venue, the last thing we want is a hard rock cafe type themed pub!