Rapacious (re)developer St Modwen, having attempted to destroy Queens Market in east London already, and having sunk its teeth into Farnborough, is now set to invade Walthamstow, east London. 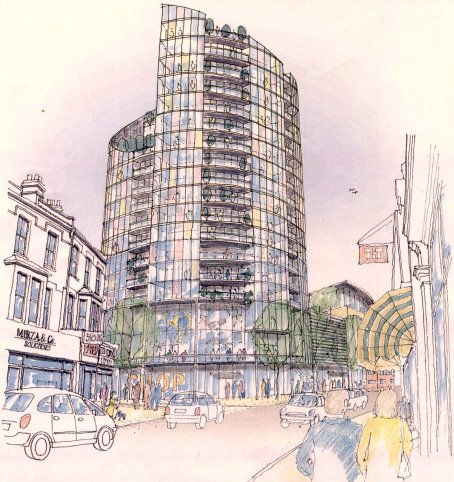 Having already destroyed most of Farnborough (

http://www.friendsofqueensmarket.org.uk/), greedy “redevelopment” specialist St Modwen is now seeking to sink its teeth into Walthamstow. So residents are fighting back (

http://www.gamesmonitor.org.uk/), St Modwen bidded to be responsible for redeveloping Walthamstow Central tube station and the “Arcade” site that sits at the top end of the longest street market in Europe. Their bid for the station failed (it went to Keir), but their bid for the Arcade site (the blank bit here

http://www.walthamforest.gov.uk/consultation-report-final.pdf), the council’s own planning brief and the advice of The Prince’s Foundation, St Modwen plan to drop an 18 storey towerblock into an area renowned for its world famous street market and low-rise Victorian housing.

The ugly block (see St Modwen’s illustration) will dominate the skyline for miles around. Although not for very long if the council gets its way – despite a massive consultation exercise in conjunction with The Prince’s Foundation that found that a) residents were overwhelmingly opposed to highrise development that was out of keeping with the area and b) The Prince’s Foundation recommending building heights of no more than 6-8 storeys anywhere in central Walthamstow – the council are determined to press ahead with building tall in Walthamstow, in order to meet its housing targets in the London Plan.

The council are presumably hoping the site acts as a precedent, allowing them to get away with more tall buildings in central Walthamstow. The same trick has already been used between Waltham Forest, Hackney and Haringey – all of whom have applications in for highrise developments bordering right onto the previously tranquil river Lea (10+ storeys at Tottenham Hale, 20+ at Blackhorse Lane, 7 at Lea Bridge Road etc.). So, if St Modwen and Waltham Forest gets their way, then expect lots more highrises in central Walthamstow, regardless of what locals and The Prince’s Foundation think.

All of this is, of course, being done under the guise of regeneration (

http://www.walthamforest.gov.uk/index/community/regeneration/walthamstow-regeneration.htm). The site is meant to regenerate the town centre. Except we’ve recently discovered that St Modwen’s plans include an eight screen Vue cinema, a 53,000 square foot massive Primark and two restaurants and possibly a coffee shop.

Why would a giant Primark not be good for regeneration? Because it will cynically be sited at the top of Europe’s longest street market. Primark sells cheap clothes. So do scores of market stalls and shops that line the market. The presence of the busy stalls and shops proves there are plenty of people in the area that need cheap clothes. But Primark’s arrival will surely kill off a significant number of the stalls and small traders – decimating the market and further weakening the small unit shops along the High Street. Making Primark the Starbucks of clothing shops – a small business killer who will suck the life out of a vibrant shopping area.

On top of that, the Vue cinema is set to be located right next door to the currently shuttered, historic Granada/EMD cinema. The council has done a U-turn on promises to compulsory purchase the cinema from the wonderfully pleasant and not at all dodgy Universal Church of the Kingdom of God (UCKG, officially exonerated over any involvement of the death of little girl Victoria Climbie). The UCKG can’t use the building, but won’t sell. So instead of forcing their hand, the council seem intent on letting the church off the hook and instead scuppering any chance of bringing the Granada back as a cinema, using the Arcade site, Vue and St Modwen as the tool – even going so far as to offer St Modwen a hefty £884,000 bonus if they get a cinema onto the Arcade site. (For more on the campaign to save the Granada, see

http://www.mcguffin.info/). If the council and St Modwen get their way, the Grade II* listed and spectacular Art Deco interior of the Granada will be left to rot.

In short, St Modwen and Waltham Forest council in just one site are ignoring overwhelming public opinion, imposing a massive highrise building that will overshadow local streets and the market, probably kill half of the market off with a huge Primark and scupper any chance of resurrecting the stunning Granada cinema into use. In just one site? Now, that really is regeneration in action.

Want to know more, or sign up to the campaign? See