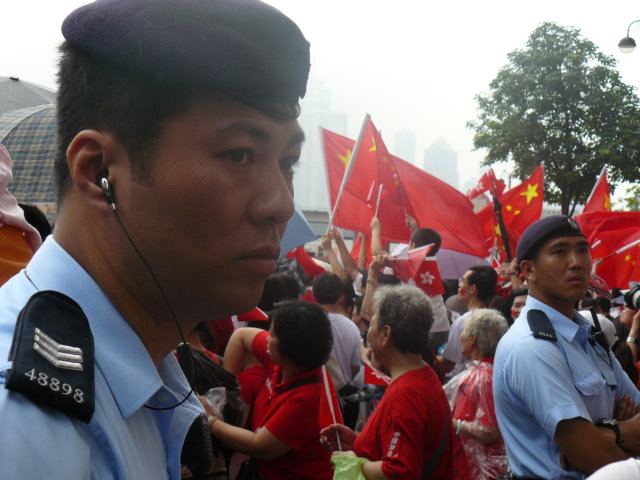 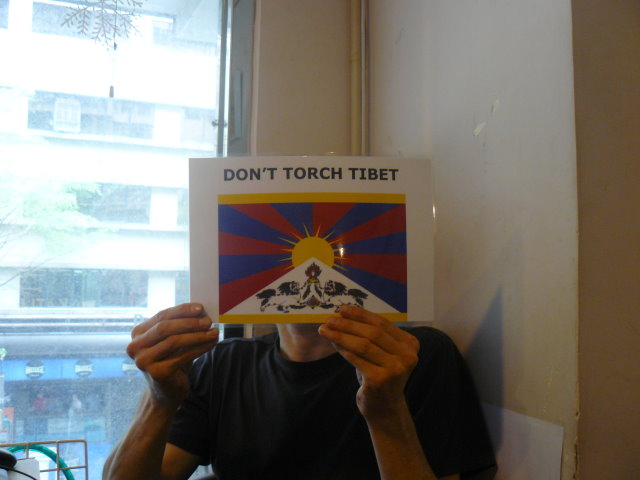 I have just come from the centre of Hong Kong where I held a sign reading: "Don't Torch Tibet" above a Tibet flag during the Olympic torch relay. I joined another protester, a German, who was carrying a Tibetan flag and whom I met today for the first time on Nathan Road on Kowloon side of the city (I am British and both of us are residents in Hong Kong).
When the torch passed I shouted 'Free Tibet' and boo-ed. This incensed several flag-waving Olympics' supporters who started shouting "ET - go home!" (I am white and evidently not Chinese).
Once the torch had passed, the crowd - numbering in the several hundreds - then began to collectively shout at us and the atmosphere got very tense. Myself and Arne (the German fellow protester) stood our ground but eventually several Hong Kong police formed a cordon around us and advised us that "for our safety" we should leave the area.
The sight of us leaving brought a triumphant cheer from the crowd while scores people continued to follow us and taunt us. I replied that Hong Kong is a free country and that free speech is a right.
As we were escorted from the busy shoppping thoroughfare of Nathan Road lots of media were filming us along with the pro-China supporters and an old woman fell down in the melee. She was whisked aside while we were taken to the entrance of an apartment block and police formed a cordon around the entrance.
The Hong Kong police officers did an excellent job protecting us and expressed sympathy for us expressing our rights but also explained that they had to get us off the street to "stop (us) from being punched and kicked". We were allowed to leave down a back alley after about 15 minutes inside the apartment block.
I had a cup of tea afterwards to calm my nerves!
I want to say one thing: I am NOT anti-Chinese, my actions were driven by a sense of injustice at the Chinese government's human rights track record (in Tibet but also in relation to the use of the death penalty and in relation to the imprisonment of people like Hu Jia). I am opposed to ALL human rights abuses (be they in Iraq, Chechnya or Northern Ireland where my own government has routinely abused the rights of Irish people). By blindly waving the flag some Chinese people are being lead down the path of nationalism and - as history will show us - that leads to very dangerous places.