Yesterday's local government elections do not appear to have been an overwhelming success for the British National Party (BNP), but in Amber Valley, Derbyshire they won two seats from Labour and missed another by only one vote. 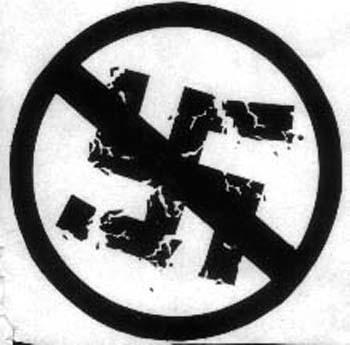 The BNP stood seven candidates across the 15 wards in the borough, among them Alan Warner who recently resigned from Heanor Town Council and Denby Parish Council in a huff because nobody listened to him. He is also the owner of the land where the party held its annual Red White and Blue festival last year and will, if they get there way, do the same this year. Although Warner was trounced in a two horse race between Labour and the Tories, in Heanor East and Heanor West, the BNP's Cliff Roper and Lewis Allsebrook won the party's first council seats in the borough. In Heanor & Loscoe, Paul Snell for the BNP (the chap on the right in this charming picture) received 512 votes, to the victorious Labour candidates 513. (Full results available here.)

Amber Valley is of particular interest to local anti-fascists because it is the likely location of this year's Red White and Blue festival, the target of a concerted campaign. It is possible that last year's event had a role to play in the BNP's electoral successes. Reports indicated a number of local atendees and this may have helped strengthen their activist base in the area. The council is currently consulting on the application for a premises licence for the festival with a licensing board meeting expected in due course to make a final decision and it remains to be seen if and how the presence of two BNP members on the council will influence this process.

The BNP also fielded two candidates in Derby. Glynn David Cooper and Paul Hilliard stood in Allestree and Chaddesden wards respectively. Both wards had been leafleted by activists from Derby Unite Against Fascism. Fortunately, the BNP's results in both wards were unremarkable with neither coming anywhere near taking a council seat.

In Nottinghamshire, there were only elections in Bassetlaw. There the BNP stood only one candidate, David John Otter, in the Clayworth Ward. He came second to the Tories, beating the Labour Party into third place.

What is striking about all of this is that the BNP seem to have comprehensively rebounded from the messy split they underwent at the end of last year rather than suffering the kind of long-term damage many of us had hoped for. They are clearly actively building a base in Heanor and throughout Amber Valley. This is why it is so vital that people mobilise against the Red White and Blue festival. While presented as "family fun," the event also plays an important role in consolidating the party which will reverberate long after the weekend itself is over.