Global week of action against Novartis May 26th to 30th

to keep the pressure on this disgusting company. 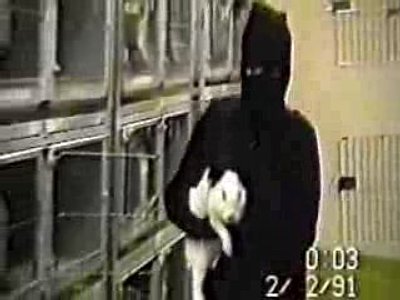 Novartis test on animals at their own facilities and are also one of HLS's
largest customers, most notorious for the Xenotransplantation scandal back in
2000.

Between 1994 and 2000, hundreds of higher primates were subjected to grotesque
'xenotransplantation' experiments. Hearts and kidneys from genetically
engineered piglets were transplanted into the necks, abdomens and chests of
monkeys and baboons captured from the wild. The research was conducted by a
biotechnology company, Imutran Ltd. Which was a subsidiary of the multinational
drug firm Novartis, all the experiments were conducted at Huntingdon Life
Sciences laboratories.

Imutran fled to America after the scandal, merged and changed their name to
Immerge Bio
Therapeutics where they carried on being funded by Novartis. In 2006, research
into the company showed that they had either gone out of business, or been
absorbed by Novartis.

All of this intense and protracted suffering of the wild-caught baboons was
inflicted with the
blessing and support of the UK Home Office. The baboons used in these horrific
experiments were just 2-4 years old - mere youngsters, and were taken directly
from the wild. They were literally ripped from the African Savannahs and
shipped to HLS to undergo these terrible experiments!

HLS 'researchers' (we use that term loosely) describe how monkeys and baboons
died in fits of vomiting and diarrhoea. Symptoms included violent spasms,
bloody discharges, grinding teeth and uncontrollable, manic eye movements.
Other animals retreated within themselves, lying still in their cages until put
out of their misery.

”Baboon W201m died of a stroke after two days of suffering from limb spasms
and paralysis.
Baboon W205m was 'sacrificed' after 21 days. A genetically modified pig's heart
had been
welded to the vital arteries within its neck. Researchers noted the heart was
swelling way beyond it’s natural size. Strange yellow fluid was seen seeping
from the organ.”
[The Observer – 20th April 2003]
www.guardian.co.uk/uk/2003/apr/20/health.businessofresearch

Not only was Novartis complicit in one of the most terrible scandals ever to be
documented at
Huntingdon Life Sciences, to this day they remain one of Huntingdon's biggest
customers. Without the support of Novartis, HLS could easily plummet into
bankruptcy and this means Novartis are a crucial target for the campaign.
Novartis have the choice of whether to deal with HLS or not, and until they
stop dealing with them they will be held accountable!!

We MUST show Novartis that their barbaric crimes have not been forgotten and
that their ongoing support for HLS will not be tolerated! Novartis recently
tried to get their injunction against protests extended to the point that SHAC
protests against them in the UK would be impossible, this pathetic attempt to
stifle legitimate protests failed and we’re here to name and shame you,
Novartis.

These are just a few examples of the callous disregard Novartis have for human
life as well as the animals they torture inside their own labs and at HLS.

GET ANGRY, GET ACTIVE! PICK YOUR DAY, PICK YOUR NOVARTIS!

For your nearest Novartis, go to:

IMPORTANT: For those planning protests at Novartis UK sites, please check out
the UK injunction to see where you can protest. We wouldn’t want you to break
the law.
See:

Novartis Global Week of Action May 26th – 30th May 2008
(More details about the week of action at:
www.shac.net/ACTION/global_dates.html

(There will be something going on in New York every day for the week of action,
whether it be Novartis/HLS stalls or legal home demo's, please contact Win
Animal Rights for up to date information:

Protests at :
• Novartis UK HQ in Frimley, Surrey
• CIBA Vision UK, Farnham Surrey
• Sandoz UK in Bordon, Hants.
(Times TBC contact SHAC if you would like to attend these demo's. Please note
that these protests will be peaceful and arranged with the police)

* Please keep all phone calls and emails polite and informative.

(Times TBC contact SHAC UK if you would like to attend these UK demo's. Please
note that these protests will be peaceful and arranged with the police)


More details about the week of action at:
www.shac.net/ACTION/global_dates.html