Appalled yet hardly surprised at the junta's callous indifference to the deaths of up to 100,000 citizens and 1.5 million more destitute, the Burmese community protested passionately at their embassy on May 9th for aid experts and aid to be allowed into Burma. Whilst getting away as always with giving the international community the run-around, this time playing games over frustrating aid shipments - the brutal junta has been more preoccupied with rigging its military biased constitution referendum for May 10th. 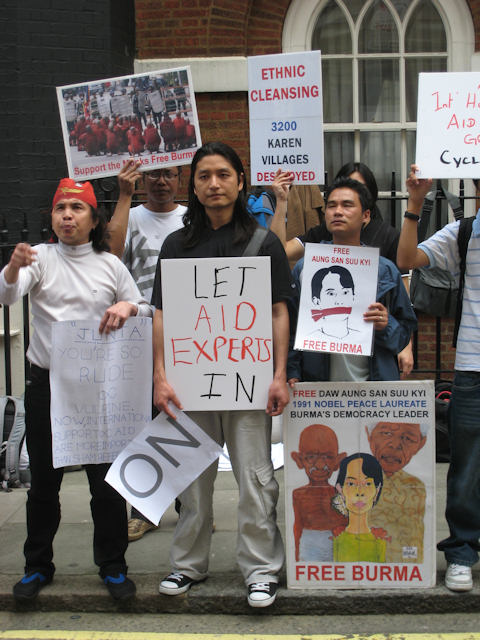 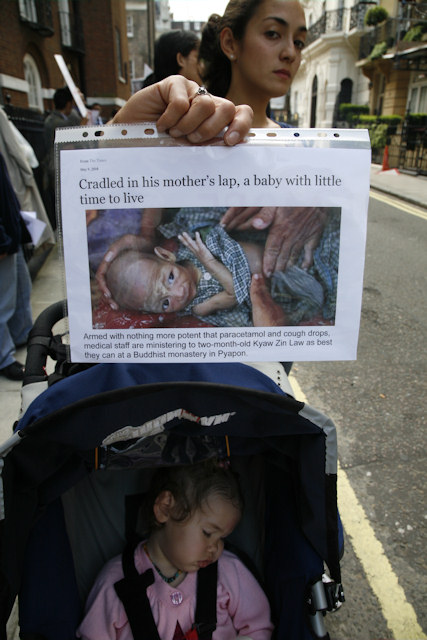 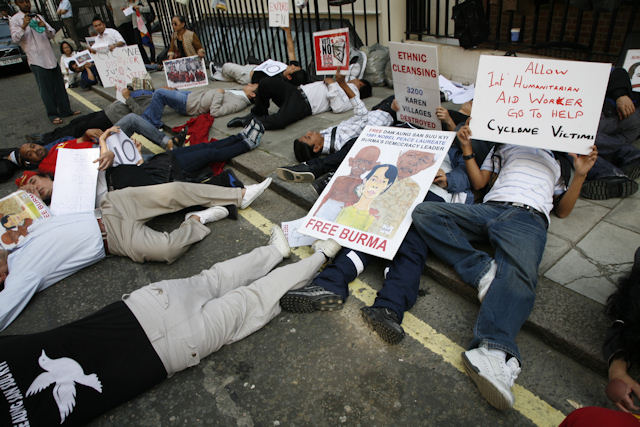 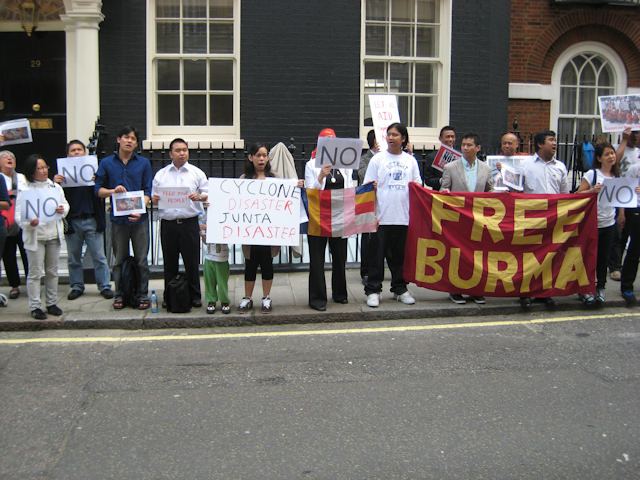 NO posters are for no vote in May 10th junta referendum 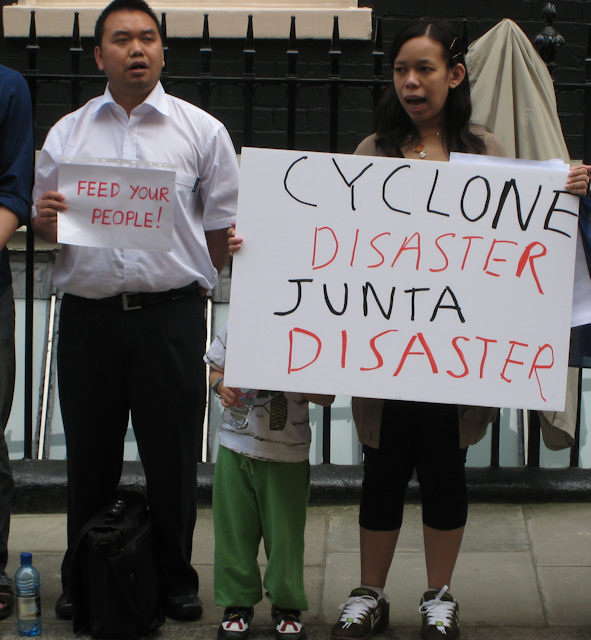 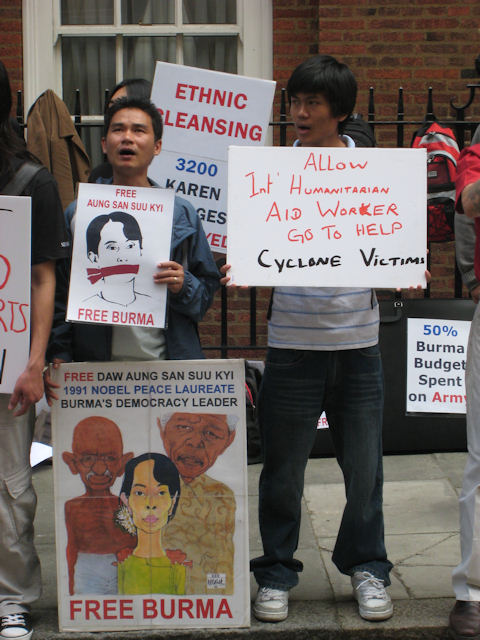 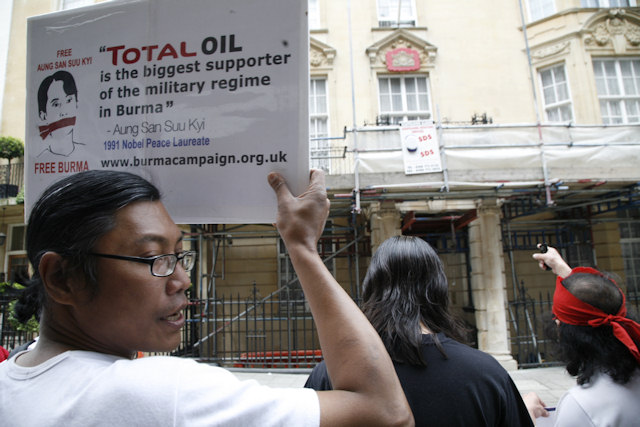 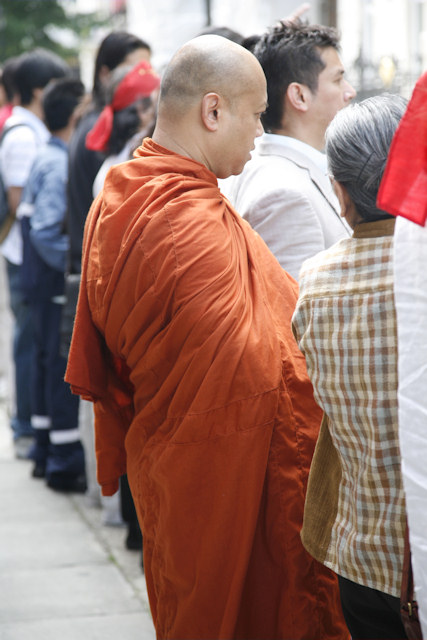 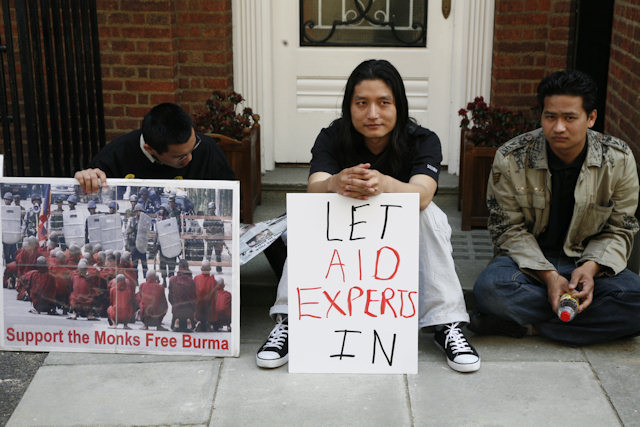 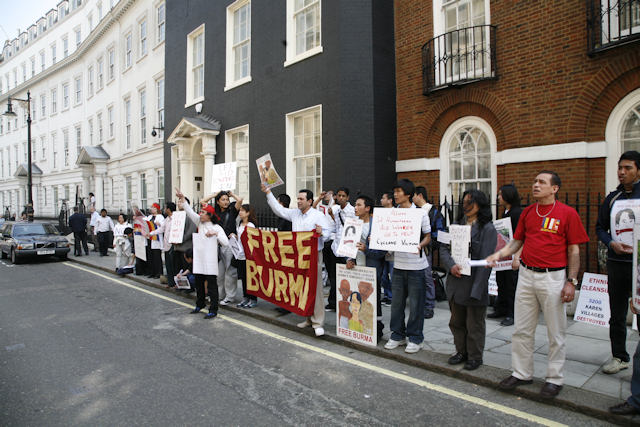 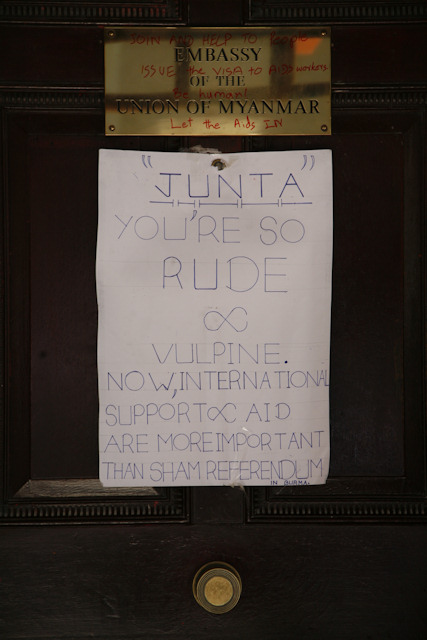 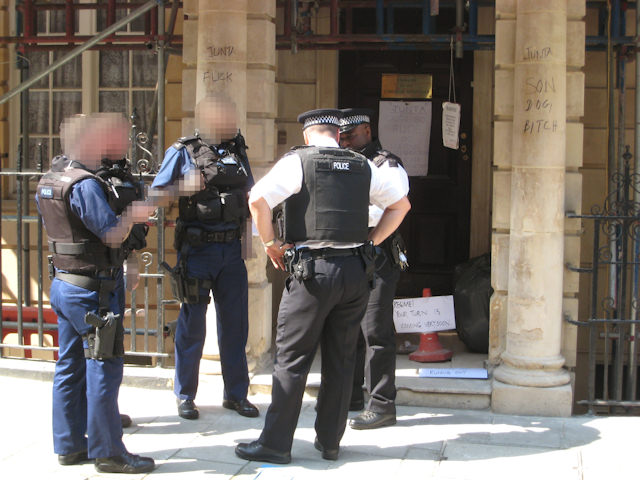 Some graffiti this time - passions were running understandably high 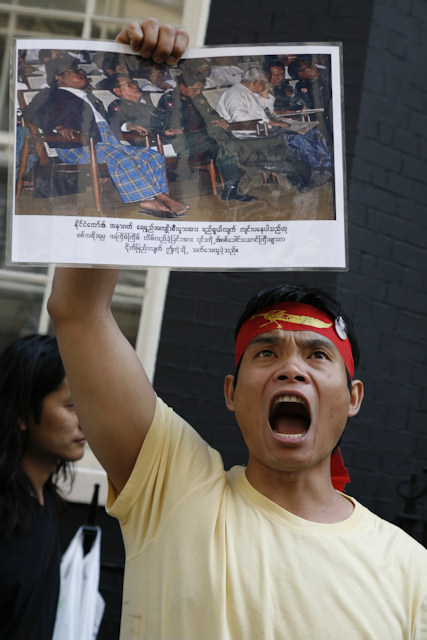 photo is of junta falling asleep during drafting of constitution

About 50 Burmese gathered, some of whose families had lost relatives and homes. The Burmese democracy movement in London had been campaigning vigorously for a NO vote in the junta's biased referendum, but the cyclone events has overtaken their concerns. The junta have a free-hand with rigging the results as any decent Burmese will be caring for his fellow citizens and helping with cyclone relief. Aung San Suu Kyi's democracy party won the 1990 election with 82% of the Burmese vote, but international community let the junta get away with ignoring the result. The military constitution reserves 25% of seats for the military, requiring a 75% majority for any changes (so impossible without military agreement), requires the president to have been in the military and contains clauses on foreign spouses and foreign born children specifically intended to prevent Aung San Suu Kyi standing for election again. Protesting against the referendum carries a 3 year prison sentence.

Whilst international aid agencies desperately try to get the aid experts into Burma, the junta's visa staff have gone on a 3 day holiday. The junta say they will accept aid, especially cash aid, but not foreign aid experts. Transparency International ranked Burma as the most corrupt country in the world in 2007, so not only do the junta lack the means to distribute large amounts of aid, nobody in their right mind can trust them.

The junta was even confiscating UN aid that had made it into Burma, causing the UN to temporarily halt aid shipments. The international media seemed to be fooled at times, reporting positive comments by Burmese officials that aid was welcome, only to learn that these officials positive comments were worthless as aid agencies were given the run-around by senior junta officials oblivious to aid agencies urgent appeals. Aid convoys were attacked by armed members of Swan-Ar-Shin, a government-supported organization that helped suppress last September’s demonstrations - see

There are numerous aid agency appeals for donations for cyclone relief. Burma Campaign UK has a web page on the crisis, with donation links to major charities helping victims of the cyclone eg. Christian Aid, Oxfam, The Red Cross, Islamic Relief and CAFOD. Those outside the Burmese community will probably feel more confident donating to these well known agencies. Please be careful of any spam email requesting donations as previous humanitarian disasters attracted fraudsters.

http://www.freeburmafunduk.blogspot.com/ - the Funding is supervised by the International Burmese Monks Organization (UK). Details are:

For security, you should independently check the above details at well known Burmese websites eg.

http://www.bsouk.org/ - The non-political Burmese Student Association is organising its own appeal

http://myamarnews.blogspot.com/ the excellent news blog is suggesting donations to the The Thailand Burma Border Consortium (TBBC). This is a UK registered charity and an consortium of 11 non-governmental organisations (NGOs) from nine countries providing food, shelter and non food items to refugees and displaced people from Burma. They had previously had to impose rations in April due to lack of funds and high rice prices. Donations are at: