This is a translation/repost of an article found on Imc Germany, which reports that the community activist, Jan Matshobe, has been arrested by police on Tuesday, 29th of April, during a demonstration against water privatisation in Sebokeng, a township ca. 60km south of Johannesburg.

First the police released the activist, but he got then rearrested in the evening. Thursday monring he was found dead in a field. 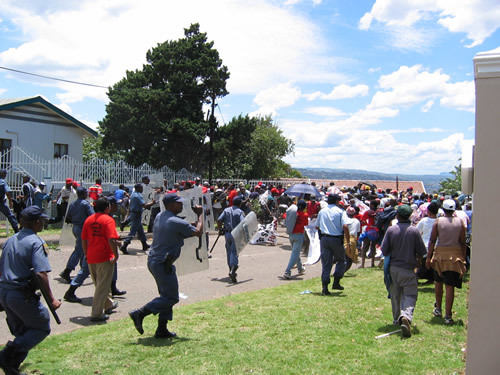 The Independent Complaints Directorate (ICD) is investigating a case in which a Sebokeng resident and community activist was allegedly beaten to death by police.

This follows accusations by the community that Jan Matshobe, 27, whose body was found on Thursday morning last week in an open veld in Zone 20, was allegedly beaten with golf clubs and batons by a number of police officers.

The incident followed a protest in the area where residents were demanding a response to a memorandum handed to the Emfuleni local municipality for better service delivery on March 10.

Matshobe was one of the activists who was very vocal against poor service delivery. One of the Tuesday’s march organisers, Patrick Sindane said Matshobe was assaulted in full view of fellow protesters.

Sindane alleged that Matshobe was arrested after the beating but was later released. He saw a doctor on Wednesday morning.

“He was rearrested in the evening and was last seen alive with the arresting officers. The same officers were the ones who discovered his lifeless body the following day,” said Sindane.

Several other residents who were also arrested claimed they witnessed the alleged beating.

Police spokesman Captain Keke Motsiri said they were probing a case of murder. He said the matter had been referred to the ICD directorate.