Freeconomy Wrexham held its second dedicated Bring and Take event today. Our intensive postering and flyering in Brynteg paid off, and lots of people from the local area came along to find out more and went home laden with useful things, all for free. Bring and Take is a great thing to do - really happy and hopeful. We'd recommend it to anyone! Meanwhile, down at the council skips, there's a distinct absence of goodwill... 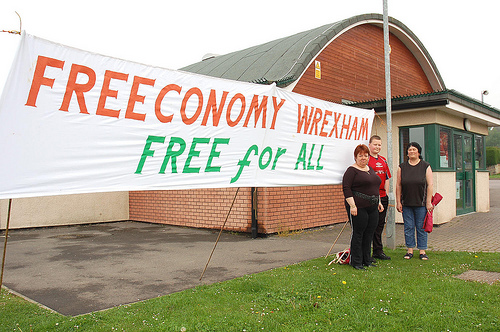 Early arrivals wait outside the venue 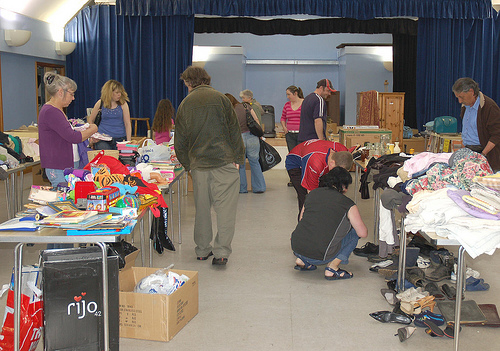 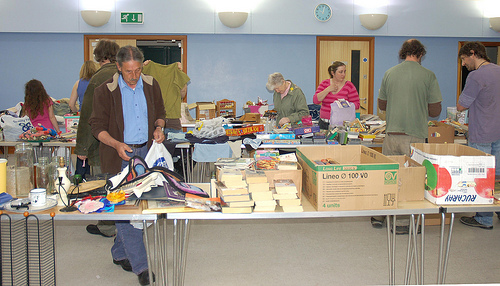 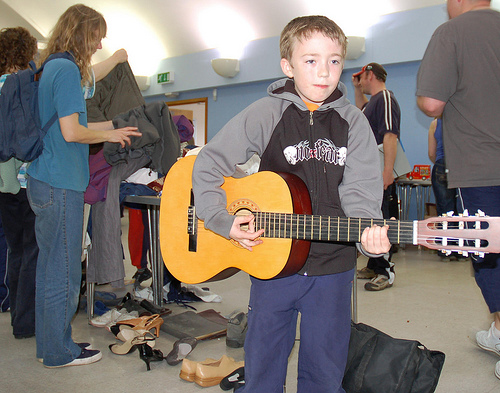 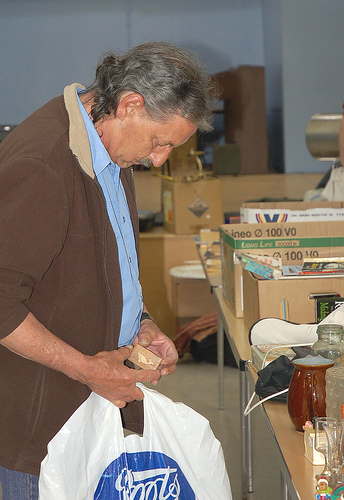 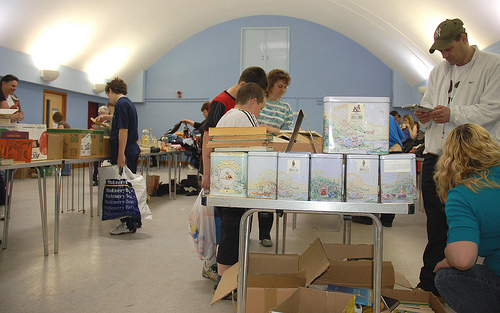 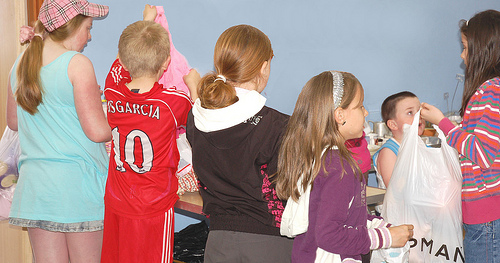 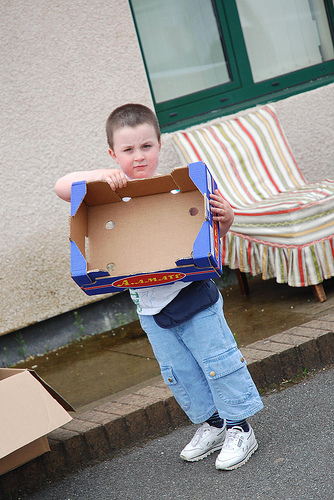 It's so wonderful to do something that makes people smile, costs nothing, is good for the environment, brings people together, where everyone benefits and where there are no losers. Capitalism, eat your heart out!

We made a big effort this time to inform the local community of the event, distributing over 1,000 flyers door to door in Brynteg, displaying flyers and posters in local shops and community venues and sending out information via local primary schools. Although we had people coming from as far away as Shropshire, Flintshire and even Gwynedd, the vast majority of Bringers and Takers today walked to the event from their homes in Brynteg.

The stuff donated and given away included toys, games, books, clothes, bedding, furniture, suitcases, camping equipment, a washing machine, a guitar, tea, coffee, biscuits and vegan cake, in between mouthfuls of which we asked people what they thought of Bring and Take and the gift economy:

"Freeconomy really works - people bringing and taking in equal measure, helping the community, the environment and each other. It is really good" (although actually it's fine if the bringing and taking don't come in equal measures - this is the real beauty of gift over trade, barter and exchange, which purport to be equitable but patently are not).

"I think this is an excellent idea - save the planet."

"This is the way things should be: local and without commercialism."

Meanwhile, down at the local council household 'recycling' centre, things have not been nearly so rosy this week where site operators Waste Recycling Group and contracting authority Wrexham County Borough Council have asked the police to investigate an alleged 'theft' of four plastic garden chairs from the general waste skip (destined for landfill).

Instead of politely telling the council not to waste their time, the cops have obligingly arrested and interviewed the suspected 'thief', threatened to search her house and garden in order to recover the 'stolen' goods which they say must be returned to their 'rightful owner' (so they can be put back in the landfill skip, presumably), and submitted a file to the Crown Prosecution Service regarding a potential charge of Theft under Section 1 of the Theft Act 1968.

Signs plastered up all over the skip site threaten civil action under the Environmental Protection (ho ho ho) Act and a fine of up to £1,000 for people removing items from the site, so it is interesting that the site operators and the council have opted to seek a criminal conviction.

In their view it is just too risky to allow anyone to take plastic garden chairs out of skips. Just suppose there was a problem with one of the chairs, and just further suppose that this problem wasn't noticed and a child should sit on that chair and fall off and injure themselves, and just suppose that the parent of that injured child came back to the council and threatened to sue. Just suppose, eh! Never mind that the council is supposed to be conserving its dwindling landfill capacity; never mind that the mixture of plastics and other chemicals that end up in landfill poison the earth and lead to babies being miscarried or born with cleft palates and children developing breathing problems and tumours. The causes of such tragedies are much harder to prove.

This has the makings of a very interesting court case. If anyone has experience of such cases, it would be good to hear about them.

Sorry to hear of the events re theft charge after the chair liberated from the skip/tip.

Wrexham council is no doubt influenced by the malign Freemasons on it and in it. North Wales Police stuffed with Freemasons too and only happy to help their brothers in the council.

May be the Freeconmy events have been seen as a threat to someone's business locally. Otherwise, a future threat if these are held regularly. Capitalism cannot take competition like this!

Should you seek legal advice, just make sure that the person concerned isn't one of the Brothers.

I can see the councils reasons, if you hurt yourself whist rumaging their skips, you could sue them for hurting yourself there. So with their signs not to go rumaging they legally protect themselves.

There are more and more cases I am seeing whilst reading RSS feeds showing that people are being fined for removing items from skips. If however, you go and ask permission of the skip holder can you have an item, this should stop fines.

I do some volunteer work for www.vyouz.com which includes a free virtual skip where you can list your unwanted items for others to collect and visa versa. www.vskips.co.uk is encouraging like Freeconomy items not be resued rather than go to landfill.

It's a great way if you are holding events to obtain items to pass them on to others.

If you would like to discuss more how Vyouz can help you reuse goods in your area, please email me