In a desperate bid to avoid a PR disaster of catastrophic proportions, the Crown Prosecution Service has wisely decided that prosecuting Pauline Campbell for her last action at HMP Styal would ‘not be in the public interest’. Which is CPSspeak for: ‘Giving a public platform (courtroom) to a bereaved mother, thus enabling her to make hugely embarrassing facts about Styal Prison known to everyone would really piss the government off’. So yet again Pauline is free to continue her campaign of direct action against those institutions which fail in their duty of care to their inmates. For a full report about what happened the last time Pauline was nicked click here:

See below for Pauline’s response to the latest climbdown by the state. 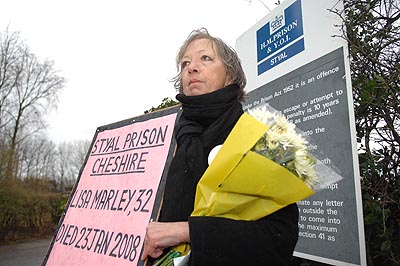 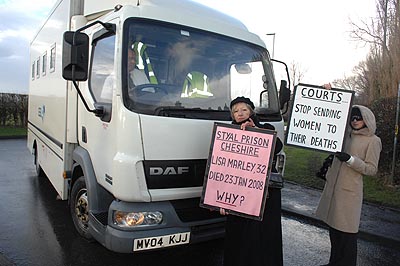 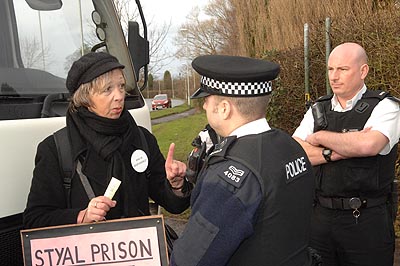 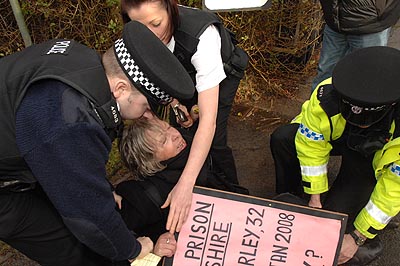 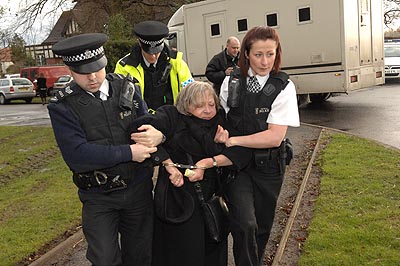 Why do they bother?

*
Crown Prosecution Service (CPS) caves in under pressure
*
Case abandoned after written representations to CPS and Attorney General
*
Letters of complaint submitted to CPS and Attorney General from serving prisoners and ex-prisoners, and other concerned individuals, slating the vindictive nature of the case, and demanding to know how the prosecution could be in the 'public interest'
*
Chief Crown Prosecutor Ian Rushton admits case is no longer in the public interest - letter to defendant Pauline Campbell, dated 30 April 2008
*
Three-day criminal trial called off (Macclesfield Magistrates sitting at Knutsford Crown Court, 30.07.08-01.08.08)

"Re: Proceedings for Obstruction of the Highway: I write following the recent Pre-Trial Review in this matter and following receipt of your letter dated 27 March [2008] the contents of which I have carefully noted. We have given your submissions careful consideration and, in accordance with the Code for Crown Prosecutors have re-reviewed the matter with particular regard to the points that you make in respect of the public interest test. We have carefully assessed both the factors for and against the prosecution in this matter, and paid particular regard to your current medical situation and have decided that it would no longer [* be in the] public interest to proceed further with this matter. We have also taken account of the fact that this incident was generated by the unfortunate death of Lisa Marley at Styal Prison in January of this year which I appreciate will have caused you particular distress. According to my information you are not legally represented at this time which is why I have enclosed the Notice of Discontinuance** with this letter for you personally. In short this effect is to bring these current proceedings to an end. You will not be required to attend Court in relation to this matter any further."

Received by Pauline Campbell on Saturday 3 May 2008 - a two-page formal letter from Crewe CPS, dated 30 April 2008, which states: "The decision to discontinue this charge has been taken because a prosecution is not needed in the public interest."

1.
Arrest and charge (obstructing the highway): 5 February 2008, at a prison-death demonstration outside Styal Prison, to protest against the death of the young mother Lisa Marley from Blackpool, who died on 23 January 2008 in the care of the jail. Thirty-two year old Ms Marley was on remand, and therefore legally innocent when she died. Lisa was on 'suicide watch' at Styal when she was found hanging in her cell. She was taken to hospital, unconscious, having suffered 'catastrophic brain injuries', and died four days later.
2.
Three court hearings were held at Macclesfield Magistrates' Court: a 'not guilty' plea was entered on 27 February 2008; and two pre-trial reviews took place on 19 March 2008 and 9 April 2008.
3.
Legal aid was denied on the grounds of 'interests of justice': I was without legal representation at the three court hearings.

- on the case generally

From start to finish, this senseless prosecution was a waste of the court's time, a scandalous waste of public money, and an enormous drain on my emotional health. Yet another attempt to criminalise and punish me has failed, and the CPS and the Attorney General have met with a barrage of letters complaining about the vindictive nature of the case, demanding to know how the prosecution could be in the public interest (I have seen copies of some of these letters).

This prosecution has felt like an attack on my reputation, especially the false allegations made about me by serving police officers. But I believe in standing up for principle because it is one of the few ways in which people can make a difference. I refuse to bow to pressure, and will stick to my resolve to hold prison-death demonstrations outside jails in England when women kill themselves in the so-called care of the State. It is mediaeval, and people must speak out. Justice Secretary Jack Straw is the one who should be in the dock, not me. I am not the wrongdoer. The message will not go away simply by trying to shoot the messenger.

Demonstrations will continue because where there is injustice there will be protest. The unjust sentencing of vulnerable women; their suffering, and deaths - that is the injustice. The way forward is to implement the recommendations of the Corston Report www.homeoffice.gov.uk/documents/corston-report/ but Ministers' feeble response (December 2007) was to say the recommendations couldn't be funded, yet it seems money is available to build three new 'Titan' prisons. Forty-one women prisoners have died from self-inflicted injuries since my daughter's death in January 2003 - unless reform is introduced, more women will die.

As far as my defunct criminal trial is concerned, Chief Crown Prosecutor Ian Rushton, Cheshire CPS, appears to have recognised at least some of the distress this case has caused me. Referring to Lisa Marley's death at Styal Prison, he says "I appreciate [this] will have caused you particular distress". Being arrested, handcuffed, and dragged to a waiting police car outside the jail responsible for my daughter's death was immensely distressing, but this was compounded by being held in police custody for over nine hours, and released in the early hours of the following morning, with bruised and swollen wrists and a raised blood pressure. (The bruising and swelling to my wrists was logged by my GP two days after the arrest.) I am still a grieving mother, and this kind of physical and psychological battering is inexcusable. Shame on the criminal justice system.

The case leaves unanswered questions. Why did it take three months for the CPS to realise the prosecution was not in the public interest?

I will be writing to the Chief Constable of Cheshire Constabulary, Peter Fahy, to complain about members of his police force - in particular Police Constable (PC) 4671 Phillip Tuck, and Police Community Support Officer (PCSO) 20305 Gareth Harding, both based at Wilmslow Police Station. In signed statements dated 11 March 2008, referring to the incident outside Styal Prison, both officers state: "Campbell began to kick out". This statement is untrue. Page one of any witness statement clearly states: "This statement ... is true to the best of my knowledge and belief and I make it knowing that, if it is tendered in evidence, I shall be liable to prosecution if I have wilfully stated anything which I know to be false or do not believe to be true." Had the trial gone ahead, and had the officers persisted with their allegation - which I would have strongly denied - the court would have been faced with having to decide who was telling the truth. To lie on oath is to commit perjury.

Furthermore, although I was not charged with assault, or actual/grievious bodily harm, Sergeant 4083 Roy Crouch, and PC 4301 Nina Ashton, both submitted signed witness statements dated 5 February 2008, referring to an apparent injury to PC Ashton's leg (two-inch lump and bruising, with broken skin), although both officers stopped short of alleging I had caused the injury. Sgt 4083 apparently photographed the alleged injury. The police were attempting to submit the photo in evidence against me.

Sgt 4083 Roy Crouch's first statement, dated 5 February 2008, was not without error - he stated that PCSO Andy Roberts attended the incident, but in his second statement dated 27 March 2008, he said it was PCSO 20305 Gareth Harding, and not PCSO Roberts, at the scene (Sgt Crouch refers to this as "a clerical error").

It is incompatible with the principle of access to justice that anyone should have to stand criminal trial and attend pre-trial reviews without legal representation. I was denied legal aid, even though I have no paid employment and no savings. As "the accused", I found it enormously stressful having to conduct my own case in court on three occasions - I am not a lawyer, and have no legal training. The Lord Chief Justice, Lord Phillips, who has voiced concern about the growing number of people representing themselves in court, said last month: "I view with concern the steadily increasing numbers of litigants in person, due in part to difficulties of getting legal aid. It makes the task of dealing with a case more difficult and time-consuming."

[All comments above by Pauline Campbell]

[If ever you wish to have your name removed from this mailing list, please advise by e-mail]