A barking dog in a room full of mirrors sees only enemies,
said Sathya Narayana... the FBI's leadership with its pawn judges
and prosecutors projects violence
onto gentle people who seek to make the world
safe for animals through education, lawsuits, and
other conscience motivated nonviolence. 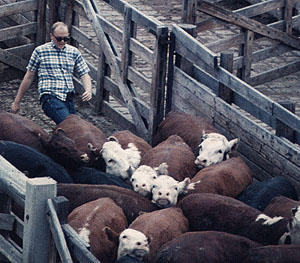 Cows in slaughterhouses are forklifted into walls 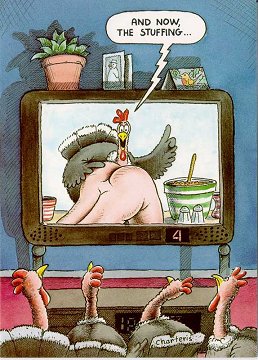 US REGIME ATTACK ON ANIMAL RIGHTS

The FBI is criminalizing those who work to prevent
what is seen in this video.. cruelty repeated in every
slaughterhouse in the world to trillions of animals

This article is not about middle management and
the 'lower' ranks of the federal bureaucracy.. but about
those who establish and increment policy. What is said of
animal rights is also true of the environment, peace, democratization, socialism and other
movements. These are the most powerful populated and
decentralized movements in the world.

The FBI has helped to pass an unconstitutional law called the Animal
Enterprise Terrorism Act which criminalizes peaceful protests such as sitins
at slaughterhouses and labs, as never before. Original
sponsors were Inhofe and Coburn of animal genocide Oklahoma
supported by Diebold senators Chambliss and Izakson of the
CDC and Time Warner controlled Georgia. www.worldanimalnet.org

The FBI has for its megabutcher corporate powerbrokers, infiltrated
the Earth Libertion Front, doing arson to animal habitat and blaming
it on peaceful activists.

These nonviolent activists have been labeled terrorists
by the regime, which is conducting the most organized
terror wars the world has seen.

The FBI's attitude has been indicated in their semantics as well,
as they named an invasive spying program 'carnivore'.
An FBI agent Antignano citing an unconstitutional Virginia lie which
criminalizes a multimilennial practice of wearing masks at
halloween, mardi gras, protests and other events, arrested a man
at a circus protest in Virginia for wearing a mask.

Prisoners in several jails have been denied vegan meals, most recently in Sacramento, where Arnold Schwarzenegger has
helped to criminalize the 1st Amendment.

Both Clinton and Bush have appointed Goldman Sachs
execs to the Secretary of the Treasury. Henry Paulson, former
CEO of Goldman Sachs and at the same time president
of the Nature Conservancy, turned that group's wilderness
shrines into concentration camps for captive cows whose
cadaver pieces are sent to meatmongers in whom Goldman
Sachs is invested.

The Senate since its inception has given livestock states
with little population the same power as highly populated
ones. The worst example is animal concentration camp Wyoming which has 1/72nd of
the population of California but the same Senate vote power.
Corruption is nothing new. The Clintons helped Don Tyson become
the nation's biggest butcher of cows pigs and chickens.

Richard Nixon took 1 million dollars from a fast food chain and in return
exempted their chain from minimum wage.

Ann Veneman, a Bush USDA Secretary mentored by the American
Meat Institute, is now the Secretary of UNICEF, spreading
toxic food around the world. www.pcrm.org

The FDA and NIH and HHS are controlled by international
pharmaceutical vivisectors, the American Dairy Association
with the help of dairy state and cattle senators such as Feingold, Kyl,
Grassley, Hatch, Cornyn, Hutchison and others.
www.notmilk.com www.stopanimaltests.com

The military has frequently been used by US presidents (including
the unelected ones) to quash the labor movement. Thus vegetarian
Cesar Chavez' grape boycott strike in the 70's elicited from the Army a massive purchase of grapes. www.ufw.org

The US is now the fattest nation in the world, thanks
to saturation advertising on the airwaves of fast food,
while children in school lunch programs are fed obesity
engendering animal products. Though animal flesh
causes many more deaths annually than tobacco, drugs,
war, alcohol and traffic deaths combined, and though
tobacco and alcohol ads are limited, animal product ads
are not yet.

As the Pentagon, says John Kerry, has programs to
force warmonger generals on the airwaves with the cooperation
of neocon network owners, so the publishing houses
have played the game as well. www.indymedia.org

Recently John Lescroart (2007) created a character named
Thou Shalt Not Kill and projected violence onto him,
while Sarah Graves made her most deceitful character
in one book a vegetarian. Was Lescroart trying to create
a connection in the public's mind between nonviolent
scriptural quotes and acts of cruelty. Is this projection?

Regnery, the publishing house whose Lucianne Goldberg
coconspired with Linda Tripp to frame President Clinton
for private sexual acts, is a war promoting publisher
which also brings to the public Ted Nugent, who teaches
children to kill animals with bows and arrows, in the name
of animal protecting Jesus.
www.christianveg.com
www.jewishveg.com www.hindu.org www.plumvillage.org


The taxes of the poor are stolen and given to Harvard,
which has the richest endowment in the country (invested in
war profiteers, environmental destroyers, and abbatoir stocks) and receives
over 300 million annually with which it tortures animals
in underground labs. www.neavs.org

A barking dog in a room full of mirrors sees only enemies,
said Sathya Narayana... the FBI's leadership with its pawn judges
and prosecutors projects violence
onto gentle people who seek to make the world
safe for animals through education, lawsuits, and
other conscience motivated nonviolence.